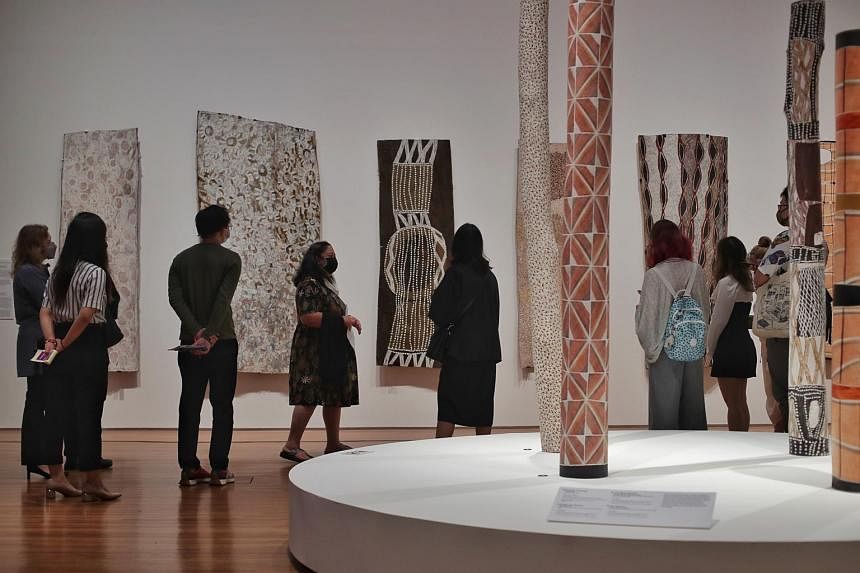 SINGAPORE- An exhibition that surveys historical and contemporary works by Aboriginal and Torres Strait Islander artists from across Australia is now on at the National Gallery of Singapore.

“It is really important to be able to talk about the ever-present presence of the First Peoples, beyond the enduring legacy of people here, we wanted to showcase that through the art in the collection,” says Ms Tina Baum, 52, a curator from the National Gallery of Australia.

The First Peoples of Australia refers to the Aboriginal and Torres Strait Islander peoples who lived in Australia before British colonisation. The term was used as early as 1789 though every community is ethnically and culturally distinct.

The more than 170 artworks at the show were produced using different mediums, including bark painting, water colour, mixed media. It is the largest exhibition of the First Peoples art of Australia to travel to Asia

Besides showcasing the culture of the First People, the works also touch on the lesser-known ties between them and South-east Asians in pre-colonial times.

This influence is seen in batik artworks, with several Aboriginal Communities in central Australia learning the technique from Indonesian traders to make their own works. These ties were severed after both countries were colonised.

“Some audiences may be pleasantly surprised when they learn about that connection, and hopefully we can get reconnected again,” says Ms Baum.

Resistance and colonisation is another theme explored in the exhibition. Artists Tony Albert, 42, and Julie Gough, 57 , want to use their art to tell the painful stories of their people, which are often erased in Australia’s colonial narrative.

“Art is a vessel to tell these difficult stories, and I think people have a greater comfort with imagery,” says Albert, whose work Ash On Me, displays his collection of ashtrays to reflect the commercialisation and generalisation of First Peoples’ culture.

Gough’s work is darker, featuring unfinished wooden spears burnt with names and bound by a wooden chair frame. She pays homage to the First Peoples’ children who were taken by colonists and indentured to a life of servitude.

“Repetition is a way to speak and show trauma. These spears are not finished as they’re not burnt at the tips, just like I don’t know what happened to many of these children. Did they survive, did they become adults? I don’t know,” she says. The artist is a descendent of the Trawlwooway Aboriginal people in Tasmania.

The artists hope the exhibition can celebrate the culture and art of the First Peoples of Australia, and delve into the history of colonisation that the First Peoples and Singaporeans share.Gough says: “Across different age groups, demographics, wealth, there’s a great possibility to bridge divides through art.”