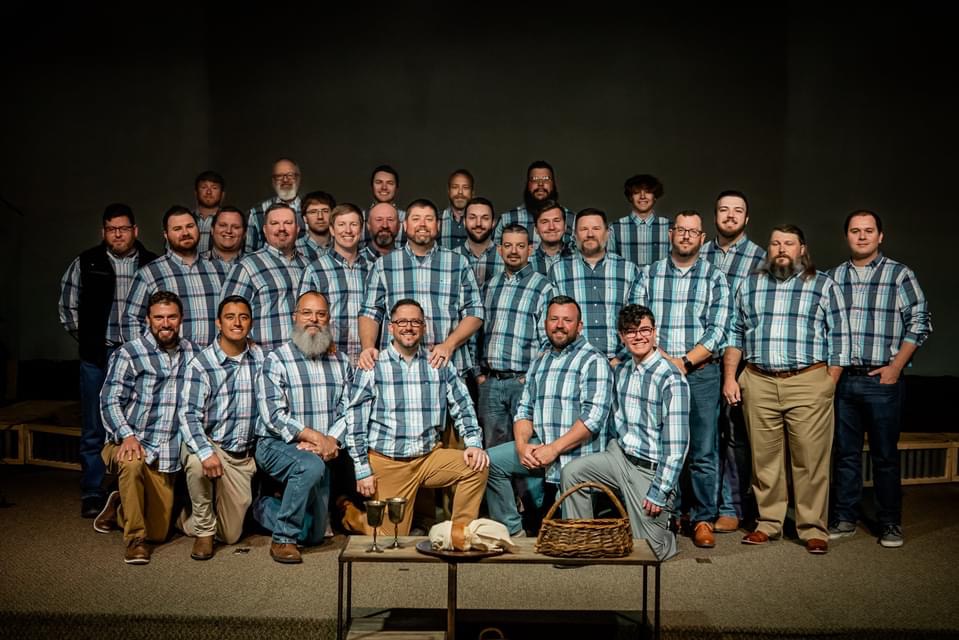 ALBERTVILLE, Ala. – When the doors opened Easter for services at the Albertville campus of Connect Church, something was different. Or in this case, a lot alike.

Guys walking in were complimenting each other on their Easter outfits. Justin Davis is the Worship Arts Director. “You can chalk two people up to coincidence but when number three through 13, walk through the door all with the same shirt on,” he told me, “You start to figure out that there’s something else afoot here.”

There was indeed. 28 guys showed up wearing the same shirt! Justin said, “I was told that the family had to match for pictures. So, my wife bought my shirt for me to make sure it would color coordinate.” But that wasn’t necessarily the truth.

Church member Bobby Gonzales told me, “It’s the one time that I wear a button up shirt so that I just assumed every other year she had bought me a button up shirt to match with the family.” He continued, “Little did I know that every guy in the whole church had the same shirt.”

Campus pastor Dustin Teat looked at me and simply said, “They pranked us.” In the 16 years he’s been married, his wife Lindsey has never bought him a shirt for Easter. “She just purchased it and kinda stuck it in the closet hoping that I would take the bait and there would be no conversation. And there was no conversation,” he said, “I just took the bait, wore the shirt and looked like a fool.”

He took it hook line and sinker. “Um, yeah,” he said with a big smile. When he realized he was part of the prank, he called his wife and told her to bring her another shirt. She didn’t.

“When he saw it and realized I bought him one for Easter, he said thank you and I thought oh no,” she said with a laugh, “I kind of felt a little guilty.” But that feeling didn’t last long. “I knew the end result was going to be a lot of fun, so it passed pretty quick,” she said laughing again.

It didn’t take long for the guys to figure out who had this up their sleeves. They knew it was the women in their lives. Melody Still got the idea from a Facebook post. She shared it with the other ladies, and they buttoned up their plan.

“It kinda snowballed from there. I was just like, hey yall, this is so funny. Look at this,” she told me, “And they were like, let’s do it for Easter. So, we went with it from there.”

Anna Liles was the first to buy one. “When it got close to Easter, I just pulled it out and asked my husband if he liked it and he said yeah, I like it,” she told me with a huge smile, “And I said, okay, you think you want to wear it on Easter, and he said sure. So, I ironed it and laid it out to make sure he didn’t forget it.”

The guys knew they’d been had. “Every time a new guy would come in they’d be like, look at your shirt. It was really funny,” Melody added.

And the guys may go all out again to even the score. Another member, Scott Jones looked at me and said, “Mother’s Day. Yeah, it’s coming.” They all laughed. The girls say they’ll be ready, just don’t forget the flowers.