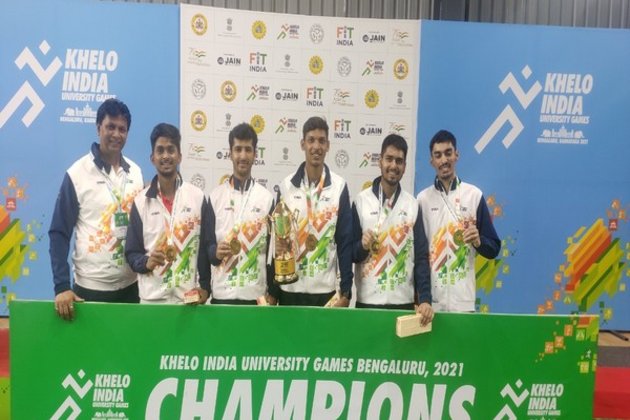 Bengaluru (Karnataka) [India], May 3 (ANI): When the University of Mumbai stepped out to play the Men’s Team Table Tennis final against SRM University on Monday at the Khelo India University Games 2021, there was a big surprise in store.

The Captain of Mumbai University, Mandar Hardikar, had decided to miss out on the summit clash, and instead, Chinmaya Somaiya, Deepit Patil and Parthav Kelkar were picked to start. Mandar, who had been a key player for Mumbai University, in the Group Stage game against the SRM University a couple of days ago, was on the sidelines cheering for his team.

“It was a strategical decision we made based on our results in the tournaments so far, and which player has performed better against which player,” Mandar said after his team picked up a 3-0 win in the Final to claim the Gold medal in the Men’s Team Table Tennis event at KIUG 2021.

Currently, Mandar plays in the European League for the Croatian club, STK Starr, and has been a regular feature in the Champions League. Mandar has also played for India at the U-19 level in the China Open in 2019 and has attended several India camps throughout his career. His teammate Deepit Patil, has also represented India at the SAF Games at the U-21 level. Mandar believes that the international experience really helped their team in the Final against a very strong SRM University team.

“With our combined international experience, we have an idea of how to deal with pressure games. It helped us figure out the best strategy for going into this match, and our players really applied themselves well on the table,” he said.

Hailing from the Malad district of Mumbai, Mandar initially started taking coaching in cricket, much like most Mumbaikars. When he was 9 years old, he stumbled upon a session of Table Tennis coaching that was being given to kids at a place nearby his school, and he developed an interest to switch his cricket bat with a paddle.

“I found table tennis to be quite a fast sport. Everyone plays cricket in Mumbai, so I also wanted to be different. Also, coaching in cricket was quite expensive,” Mandar said, explaining his reasons for the switch in his sporting journey.

“TT was a growing sport, so I adapted to it quickly. I watched my paternal aunt play TT, and she was doing really well, so it motivated me as well,” he added.

Sports was a common factor among most family members in Mandar’s family, so convincing his parents to pursue the sport was not a difficult task for him. “They said you should keep studying side-by-side but really motivated me to play,” he said.

Mandar, whose father works as a tax consultant, and his mother works in the BMC, received a lot of financial and motivational support from his parents in the early stages of his career. “My parents said that even if we have to spend, it will help us in the long run. They invested a lot in me at that stage,” he said.

Now, with an eye to winning an Olympic medal for India in Table Tennis, Mandar believes Khelo India University Games gave him great experience and learnings for a World-level event.

“Khelo India gave us an opportunity to play against a lot of strong players from the country. Because of the organisation of the tournament at such a vast level, it is almost like preparing for World-level events, and really helped us all,” he said.

Table Tennis has grown steadily over the past few years in India with the likes of Manika Batra, Sathiyan G and Sharath Kamal, making a name for themselves in the sport and delivering tremendous performances on the biggest stages. Mandar believes a time is on the horizon when India will beat neighbouring nations Japan and China, to claim Olympic medals in Table Tennis. He also believes his beloved sport will attain popularity to rival that of cricket and/or badminton in India very soon.

“Table Tennis is growing because Manika Batra, Sharath Kamal and Sathiyan G are performing well on a regular basis at major events. It is also opening doors for good players from all parts of the country. Till now China and Japan win medals in TT, but India can too get a medal in this sport very soon,” Mandar said.

“If the level of the sport continues to rise at this scale, we may see TT becoming as popular as cricket or badminton in this country,” he signed off. (ANI)