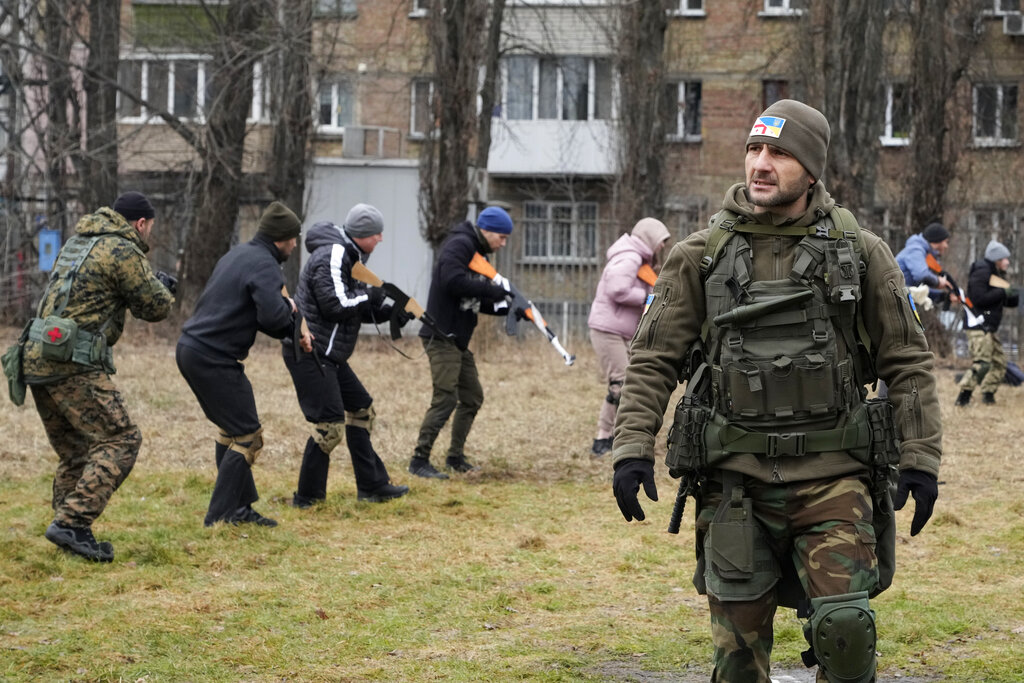 MOSCOW (AP) — Separatist leaders in eastern Ukraine ordered a full military mobilization Saturday amid a spike of violence in the war-torn region and fears in the West that Russia might use the strife as a pretext for an invasion.

Denis Pushilin, the head of the pro-Russia separatist government in Ukraine’s Donetsk region, released a statement announcing a full troop mobilization. A similar announcement quickly followed from his counterpart in the Luhansk region.

“I appeal to all the men in the republic who can hold weapons to defend their families, their children, wives, mothers,” Pushilin said. ”Together we will achieve the coveted victory that we all need.”

The separatists and Ukrainian forces have been fighting for almost eight years. But the violence along the line of contact separating the two sides, including a humanitarian convoy hit by shelling, has risen in recent days. A car bombing Friday in the city of Donetsk also sharpened the sense of alarm.

With an estimated 150,000 Russian troops now posted around Ukraine’s borders, the long-simmering separatist conflict could provide the spark for a broader attack.


Team forced to forfeit due to religious observance

“They are uncoiling and are now poised to strike,” U.S. Secretary of Defense Lloyd Austin said during a visit to Lithuania, where he assured the three Baltic nations they would not be on their own if faced with security threats from Russia.

“We do not fully know what President Putin intends, but the omens are grim, and that is why we must stand strong together,” Johnson said.

Ukraine’s military said shelling killed a soldier Saturday in the government-held part of the Donetsk region and that separatist forces were placing artillery in residential areas to try and provoke a response.

On Friday, the rebels began evacuating civilians to Russia with an announcement that appeared to be part of their and Moscow’s efforts to paint Ukraine as the aggressor.

Biden, who for weeks had said the U.S. was not sure if Putin was determined to send troops into the neighboring country, cited American intelligence as the source of his ominous assessment.

“As of this moment, I’m convinced he’s made the decision,” Biden said. “We have reason to believe that.” He reiterated that the assault could occur in the “coming days.”

Meanwhile, Russia conducted massive nuclear drills on Saturday. The Kremlin said Putin, who pledged to protect Russia’s national interests against what it sees as encroaching Western threats, was watching the drills together with Belarusian President Alexander Lukashenko from the situation room in the Kremlin.

Notably, the planned exercise involves the Crimea-based Black Sea Fleet. Russia annexed the Crimean Peninsula after seizing it from Ukraine in 2014.

Underscoring the West’s concerns of an imminent invasion, a U.S. defense official said an estimated 40% to 50% of the ground forces deployed in the vicinity of the Ukrainian border have moved into attack positions closer to the border.

The shift has been underway for about a week, other officials have said, and does not necessarily mean Putin has decided to begin an invasion. The defense official spoke on condition of anonymity to discuss internal U.S. military assessments.

The official also said the number of Russian ground units known as battalion tactical groups in the border area had grown to as many as 125, up from 83 two weeks ago. Each group has 750 to 1,000 soldiers.

Harris warned Russia that it would face “unprecedented” financial costs if it attacked Ukraine and underscored an invasion would draw European allies closer to the United States.

The president of the European Union’s executive commission, Ursula von der Leyen, said the EU has prepared substantial additional sanctions against Russia in coordination with the U.S., U.K. and Canada, including limiting access to financial markets.

“The Kremlin’s dangerous thinking, which comes straight out of a dark past, may cost Russia a prosperous future,” von der Leyen said in Munich.

Immediate worries focused on eastern Ukraine, where Ukrainian forces have been fighting the pro-Russia rebels since 2014 in a conflict that has killed some 14,000 people. Violations of a 2015 ceasefire agreement, including shelling and shooting along the line of contact, have been common.

However, violence has escalated in recent days. A bombing struck a car outside the main government building in the rebel-held city of Donetsk on Friday. The head of the separatist forces, Denis Sinenkov, said the car was his, the Interfax news agency reported. Targeted violence is unusual in rebel-held cities.

Adding to the tensions, two explosions shook the rebel-controlled city of Luhansk early Saturday. The Luhansk Information Center said one of the blasts was in a natural gas main. The center cited witnesses as saying the other was at a vehicle service station.

There were no immediate reports of casualties and no independent confirmation of the circumstances of the three blasts. Luhansk officials blamed a gas main explosion earlier in the week on sabotage.

By Saturday morning, the separatists in the Luhansk and Donetsk regions, which form Ukraine’s industrial heartland known as the Donbas, said that thousands of residents of the rebel-controlled areas had been evacuated to Russia.

More than 6,600 people had been evacuated from Donetsk, and some 25,000 people have left Luhansk, with 10,000 preparing to leave, separatist officials said.

Separatist officials announced plans Friday to evacuate hundreds of thousands of people. Russia has issued about 700,000 passports to residents of the rebel-held territories. Claims that Russian citizens are being endangered might be used as justification for military action.

Pushilin, the head of the Donetsk rebel government, said women, children and the elderly would go first, and that Russia has prepared facilities for them. Pushilin alleged in a video statement that Ukraine was going to order an imminent offensive in the area.

Metadata from two videos posted by the separatists announcing the evacuation show that the files were created two days ago, The Associated Press confirmed. U.S. authorities have alleged that the Kremlin’s effort to come up with an invasion pretext could include staged, prerecorded videos.

Authorities began moving children from an orphanage in Donetsk, and other residents boarded buses for Russia. Long lines formed at gas stations as more people prepared to leave on their own.

Authorities in Russia’s Rostov region declared a state of emergency because of the influx of evacuees. Media reports on Saturday morning described chaos at some of the summer camps in assigned to accommodate the people from eastern Ukraine.

The reports said there were long lines of buses and hundreds of people waiting in the cold for hours on end to be housed without access to food or bathroom facilities. Some of the camps were said to have run out of space.

Putin ordered the Russian government to offer 10,000 rubles (about $130) to each evacuee, an amount equivalent to about half of an average monthly salary in the war-ravaged Donbas region.

Around the volatile line of contact, a United Nations humanitarian convoy came under rebel shelling Friday in the Luhansk region, Ukraine’s military chief said. No casualties were reported. Rebels denied involvement and accused Ukraine of staging a provocation.

Ukraine’s ruling party, Servant of the People, echoed his sentiment in an online statement Saturday.

It rejected “the possibility of liberating the temporarily occupied territories by military means” and accused Russia of “trying to artificially create a pretext for a full-scale aggression against Ukraine.”