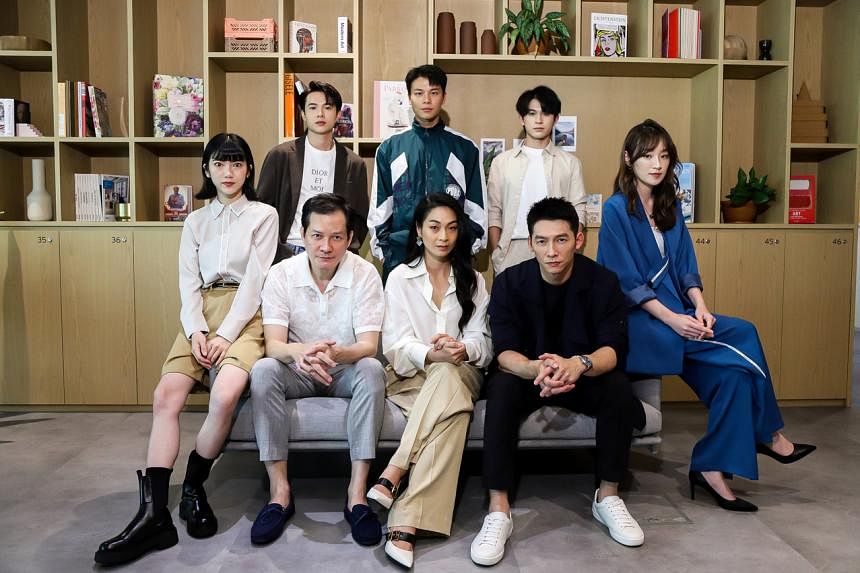 SINGAPORE – On the afternoon of April 12, cast members of Deep End were seen taking wefies, mingling with one another and speaking in front of cameras unmasked. It was like a throwback to pre-Covid-19 times.

The stars of the upcoming series have gathered for an in-person press conference in a co-working space at Park Regis Office Tower. The show is by the Hong Kong offshoot of South Korean entertainment conglomerate CJ ENM.

The series is about the horrors of the dark Web and cyber-sex crimes, and the cast includes Singaporeans Peter Yu, Glenn Yong and Aden Tan, and Taiwanese James Wen, Vera Chen and Erek Lin.

Here are five things to know about the series, which began filming in Singapore in March. It will be sold to streaming platforms after its completion.

The series is directed by two acclaimed local film-makers: Yeo Siew Hua (A Land Imagined, 2018) and K. Rajagopal (A Yellow Bird, 2016). They worked on the script together with playwright Kaylene Tan in English before translating it into Chinese for filming.

In a separate telephone interview, Yeo, 37, says: “There were a few layers. CJ ENM is a Korean company, our producer Fran Borgia is Spanish and Raja is more comfortable working with the script in English, so we wrote it originally in English before translation. But we did give the actors some space to tweak the Mandarin lines so it sounds more natural for them in speech.”

Rajagopal, 56, learnt Chinese in school and communicating with the largely Mandarin-speaking cast was not a big hurdle. He says: “I understand Mandarin – it’s just been 30 years since I learnt it, so my vocabulary is minimal, but I’m able to communicate. I also have Siew Hua on set and the Taiwanese actors can understand English quite well too. I don’t think anything was seriously lost in translation.”

What drew Wen (The World Between Us, 2019) to the project was the script, which included bold scenes of sex and crimes such as deep-fake pornographic videos.

Deep-fakes are manipulated videos and images that digitally replace a person’s face with someone else’s.

The 44-year-old plays a psychologist bent on chasing down the administrator of an exploitative Internet chatroom.

“I think as Chinese, we’re a little bit more conservative and we self-censor when it comes to sensitive topics like this, but I found that this script was willing to push those boundaries,” he says.

Singaporean actor Tan (House Of Fortune, 2016) plays Yu’s troubled son in the series. The 30-year-old says: “This frank depiction of sex is not something you see often in local entertainment.”