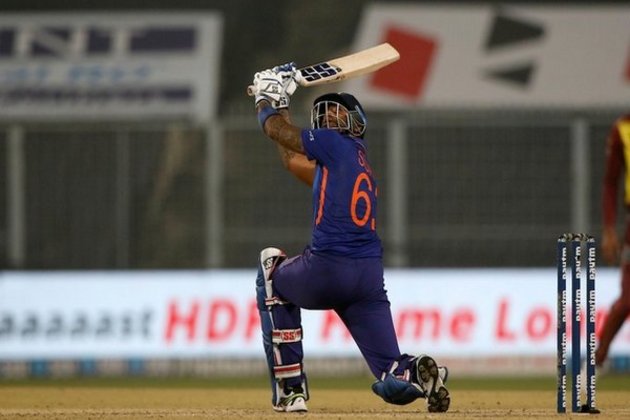 Dubai [UAE], February 24 (ANI): India batters Suryakumar Yadav and Venkatesh Iyer have made huge gains in the ICC Men’s T20I Player Rankings. Both batters had enjoyed a sensational series against West Indies, which saw the home side complete a 3-0 series win.

Yadav was India’s highest run-getter in the series while Iyer was second.

The performances have helped Surykumar Yadav jump 35 spots to No.21 while Iyer made a massive jump of 203 spots to No.115 in the rankings for batters.

The recently-concluded T20I series between Australia and Sri Lanka also helped Ashton Agar to break into the top 10 rankings for bowlers, and currently sits at No.9.

In the last two matches, Agar was miserly with his bowling and returned figures of 1/14 and 1/19. Sri Lanka’s Maheesh Theekshana’s rise in T20I cricket reflected in his rankings as well – he attained a career-high rating of 592 after climbing 12 places to No. 17.

Oman captain Zeeshan Maqsood’s performance in the ICC Men’s T20 World Cup Qualifier A saw him break into the top 10 for all-rounders, rising four spots to No.6.

In the Test rankings, following the first Test between New Zealand and South Africa, Kyle Jamieson and Tim Southee moved up a place each to occupy the No.3 and No.5 spot respectively, with the former attaining a career-high rating of 825.

Neil Wagner’s exploits with the bat and ball saw his scale four spots to No.13 in the all-rounders’ rankings. (ANI)