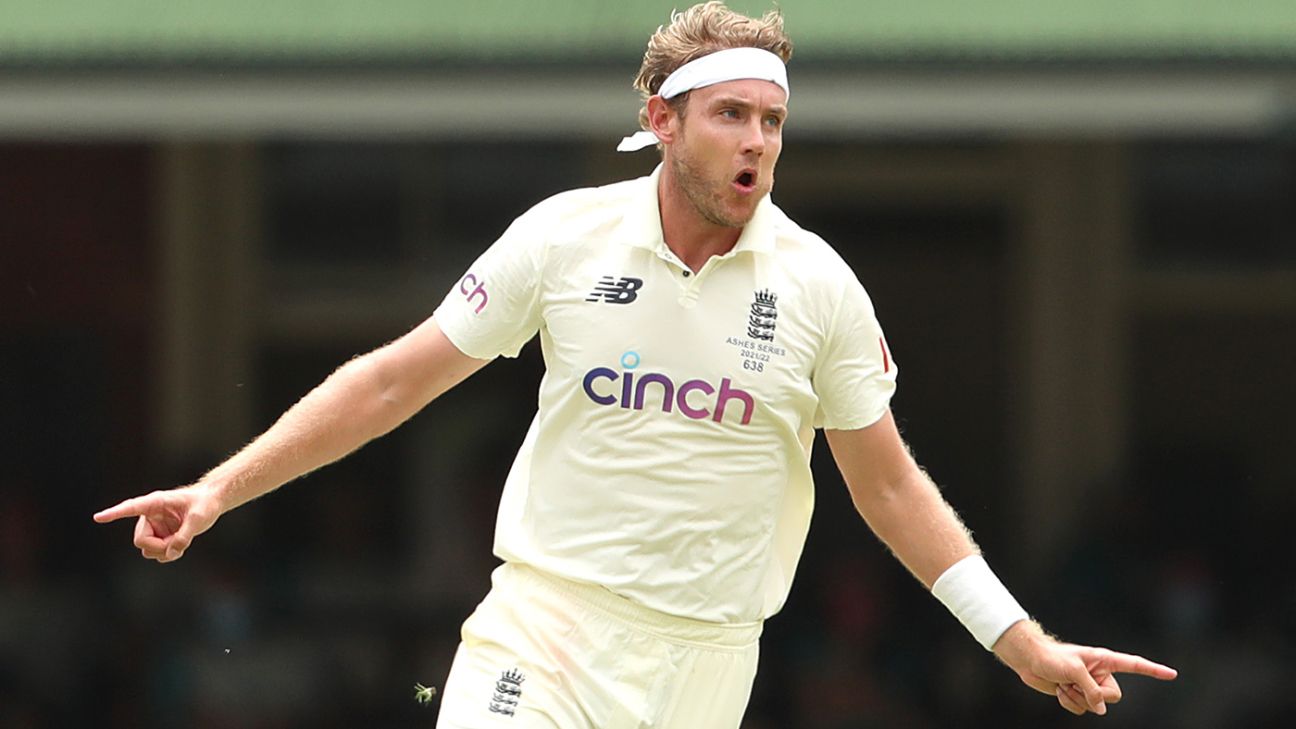 Stuart Broad has called on England’s Test cricketers to live in the moment for the rest of a dispiriting Ashes campaign, and focus on making some individual points at Sydney and Hobart, after suggesting that the squad has become too obsessed with long-term planning during the Covid pandemic, and has lost sight of the importance of winning each battle as it comes.

Speaking at the close of the second day’s play at Sydney, where his figures of 5 for 101 made him the oldest England seamer (at 35 years, 196 days) to take a five-wicket haul in Australia, Broad acknowledged that his efforts, while personally satisfying, had been unable to seize a day that had been dominated by Usman Khawaja‘s comeback century.

Nevertheless, having played just one of the three Tests in which the Ashes were live, and that on a flat surface at Adelaide that was less likely to suit his methods than two juicier decks at Brisbane and Melbourne, Broad said that the chance to make a belated mark on the tour was a reminder to him of just how special Test cricket remains to him, even in his 151st appearance. And now, with England reaching 13 for 0 in reply, he challenged his team-mates to turn England’s fortunes around by grasping the moment in front of them, rather than deferring their focus to the tour of West Indies in March, or their home summer campaigns against New Zealand, India and South Africa.

“There’s loads of reasons – not excuses – why [2021] wasn’t a successful year,” Broad said. “Covid has played quite a big part in it, but there’s a mindset within this group now that, instead of looking ahead at what’s coming in the next year, the next Ashes series, actually we need to get back to the real basics of what’s ahead of us right now. How are we winning this next Test match?

“Sometimes when your brain gets too far away from what’s in front of you, you’re not focused on delivering what you need to deliver in that Test match. We don’t know what the world’s going to look like, or what cricket is going to look like in June, and in next November, but can we win tomorrow? Can we win the next opportunity that’s in front of us?

“I think that should be a real focus for the England cricket team going forward, because it’s all well and good planning for the next away Ashes and looking at the World Test Championship, but actually, if you don’t win the battle in front of you, it’s all irrelevant.

Broad’s own competitive instincts helped to keep England fighting on another day of Ashes adversity, in which a side injury to Ben Stokes caused an extra workload for their four remaining frontline bowlers, in particular his fellow seamers James Anderson and Mark Wood – who once again bowled with raw pace but little luck to finish with 1 for 76 in 26.1 overs.

“I’m pleased to have had an impact,” Broad said. “Obviously I would have preferred it to be 5 for 30, not 5 for 100 – there’s no doubting it was Australia’s day, Khawaja played beautifully – but when you miss out on Test matches, it makes you realise how special it is to play.

“Ashes cricket means the world to me, and I love playing sport for that competitive side. I love trying to get the opening batters out and working your way through [an innings], and that’s why I keep chugging in, because it’s quite addictive, and I’ve still got a burning desire to play the sport.”

But, in noting that the average first-innings total at Sydney since 2017 is a hefty 457, including India’s 622 for 7 declared in 2019, Broad insisted that the onus must now shift to England’s under-performing batting unit, which has yet to post a total in excess of 300 in six completed innings on this tour, and has made substandard scores of 147, 236 and 185 in consecutive first-innings efforts at Brisbane, Adelaide and Melbourne.

“You can dissect loads on this trip but actually first-innings runs is where you live in Test cricket, and we’ve failed to deliver,” Broad said. “There’s a bit of uneven bounce with a brand new ball but there’s an opportunity, I hope, for someone to be sat here tomorrow, having scored a big hundred, and answering some positive questions.

“Honestly, doesn’t matter what bowlers you play if you are getting bowled out for 140. That might be a bit brutal, but that’s the truth in Test cricket.”

Writing in his Mail on Sunday newspaper column ahead of the fourth Test, Broad had expressed his frustration at not making a bigger impact on this tour, particularly in the series opener at the Gabba on a pitch which he said had had him “licking his lips”.

However, in light of the long-term calf injury that limited him to 12 wickets at 39.50 in 2021, “his worst year” in Test cricket, Broad insisted his recent comments had not been fuelled by the same sense of injustice that had caused him to speak so angrily to Sky Sports midway through the first Test of the 2020 series against West Indies.

“But with how this year has gone, when I arrived in Australia, the shirt wasn’t mine. I got injured in the India series and the bowlers bowled really nicely, although we didn’t get the results we wanted in the series. So I respect that about the decision-making. No Test cap should be given out, you always have to earn them.

“But when Rooty told me I was playing, obviously I was gutted for Robbo [Ollie Robinson], he’s had a really good trip, but I was buzzing to play, I was really pleased to get an opportunity. And bowling today made me again relight that fire … yeah, this is awesome. Great stadium. Good atmosphere, bowling at the world’s best. It’s what it’s about.”

In terms of his long-term hunger, Broad insists he’s got plenty left to give to the England team, and cites the enduring class of Anderson, four years his senior, as both evidence of what he could yet achieve, and an inspiration to put in the efforts to remain a world-class competitor.

“A few years ago I was umming and aahing, and I spent a lot of time talking to my dad about it. He has a great belief that you should play the sport you love for as long as you can. While the fire burns you should play because nothing replicates it in life. Nothing can bring you the satisfaction, the pain, the highs and the lows. They are quite addictive.

“Jimmy’s been an inspiration for me,” he added. “I see how much drive he’s still got at 39, how much energy he puts in, not just to the match days, but the training and the skill development.

“He is truly the most professional I’ve seen him in the past two years, so why can’t I replicate it? I’m not as skilful as Jimmy and I haven’t got as much armoury in my locker, but I’ve got the motivation and the drive, similar to him, and I’m as disciplined as he is. And I feel like I can contribute as much as Jimmy has since that age. He’s a driving force behind my mindset and hopefully I get to play more Test cricket with him because we had a lot of fun out there today.”

And if that ambition, late in the career of two England greats, means that the team as a whole ends up taking a short-term approach to its coming series, then Broad is adamant that this would not necessarily be a bad thing.

“I haven’t been a regular this year,” he said. “When I was 26-27-28, I expected to play every game. I haven’t done that this year. So when you miss a few and then you play, you realise how awesome it is to play, how special it is. And I really enjoyed my time out there.”