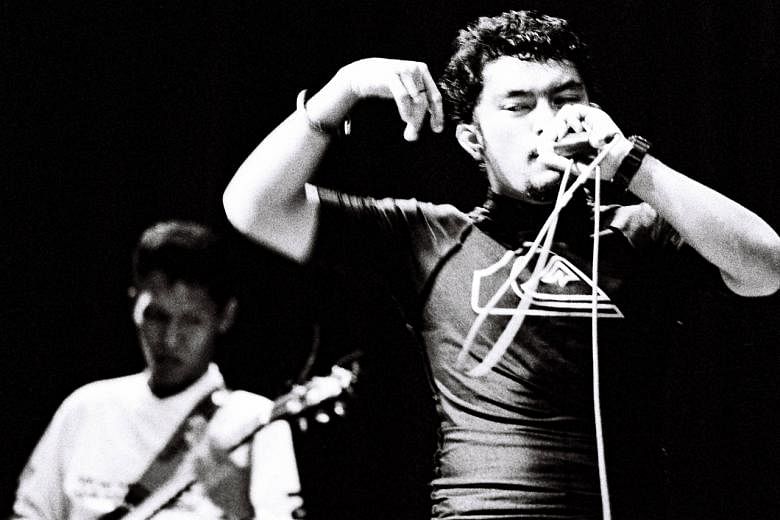 SINGAPORE – The singer of home-grown hardcore band Stompin’ Ground, Hafidz Samsudin, died of a heart attack on Wednesday (Feb 23). He was 50.

His mother, Madam Khatijah Abdul Wahid, 76, found him unconscious in his room at their Chai Chee Housing Board flat at about 2pm. He was sent to Singapore General Hospital, where he was pronounced dead. The death certificate listed the cause as ischaemic heart disease.

According to Madam Khatijah, the bachelor, whose full name was Mohammad Hafidz Samsudin, had a history of heart ailments and was hospitalised several times. He was the eldest of her four children.

Hafidz was the co-founder of Stompin’ Ground, a band formed in 1988 by a group of skateboarders that spearheaded Singapore’s then burgeoning hardcore punk scene.

The Lasalle College of the Arts graduate sang on the band’s first demo cassette, Grey (1990), and debut CD, We Set The Pace (1993), released under Skin, an imprint of Japanese record label Pony Canyon.

In a 1993 review, the late music critic Chris Ho wrote that the album marked the band’s rise “from a little hardcore hopeful to an impressive frontlining band in Singapore underground-rock”.

In 1995, their second album Measured By The Richter Scale, peaked at No. 2 in the Australian Billboard Metal Charts.

While their music was heavy and loud, their lyrics touched on issues such as environmentalism, animal abuse, the downsides of substance abuse and the value of friendships. Hafidz wrote most of their lyrics.

The band were also for known for their dynamic stage presence and Hafidz’s restless leaps and headstands became part of their onstage trademark.

Stompin’ Ground went on hiatus in 1996. Hafidz did not join them when they regrouped in 2003 and released another album, Vector Prime (2004).

He started performing with the band again from 2006 until they played their final show in Kuala Lumpur, Malaysia, in 2013.

In 2012, a group of local illustrators, photographers and toy makers staged We Set The Pace: A Retrospective Of Stompin’ Ground, an art and photo exhibition at The Substation that paid tribute to the band.

Many musicians from bands that are part of the local underground music scene attended the burial at Pusara Abadi Muslim cemetery in Lim Chu Kang on Thursday afternoon.

Among them was his cousin, Stompin’ Ground co-founder and guitarist Suhaimi Subandie.

“He was a very easy-going person and he was a very good listener,” said the 58-year-old. “But when he was on stage, he was all rage and fury.

“I have never seen any other frontman in Singapore who can match his stage presence. Who else can sing while doing a headstand?”