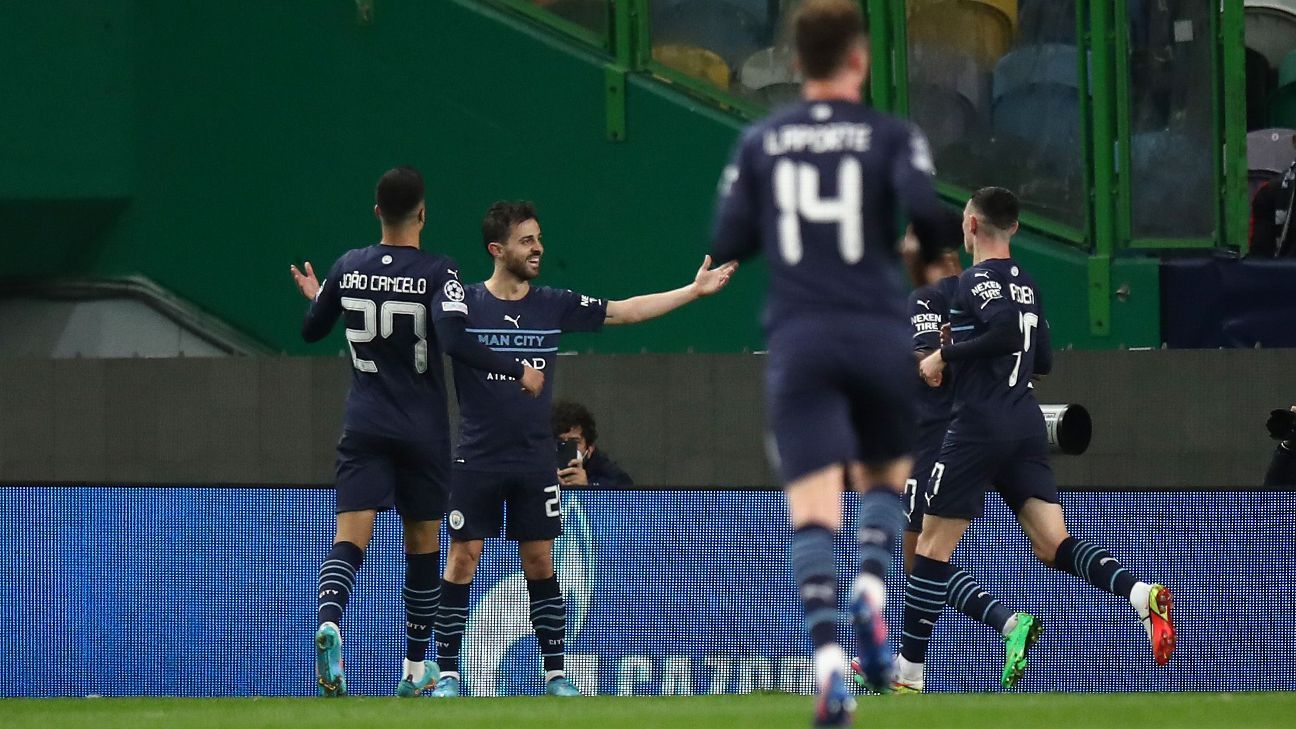 Manchester City have one foot in the Champions League quarterfinals after an impressive 5-0 win at Sporting Lisbon on Tuesday.

Pep Guardiola’s side scored four goals in the first half through Riyad Mahrez, Phil Foden and a brace from Bernardo Silva.

Raheem Sterling also got on the scoresheet in the second half as the Premier League champions cruised to a stunning away win.

City welcome Sporting to the Etihad stadium on March 9 as they continue their bid to win the Champions League for the first time in the club’s history.

“It’s a very good performance,” Silva said. “I honestly think in the first half we weren’t good enough to be 4-0 up.

“I’m Portuguese, I’m from the other side of the city. My mum is Sporting, my dad is Benfica. It was special to score here in my hometown.We still have a job to do in Manchester.”

The visitors took the lead after seven minutes when Mahrez tapped home from a Kevin de Bruyne cross. The strike was initially flagged for offside but the goal was given after a lengthy VAR check.

City doubled their lead 10 minutes later when Silva executed a stunning half-volley into the net off the crossbar after a cleared Sporting header from a corner.

The Premier League side grabbed a third just after the half an hour mark when Foden bundled home from close range while Silva made it 4-0 before the break.

It is the first time an English side has scored four goals in the first half of a Champions League knockout game since Manchester United‘s 7-1 thrashing of Roma in 2007.

Silva thought he claimed his hat trick five minutes into the second half but his header was correctly ruled out for offside.

Moments later, Sterling curled a sublime effort into the top corner to score his 150th goal of his club career.

The goal also ensured City became the 14th team to score 200 goals in the Champions League — with more surely to come as they continue to hit top gear, at home and abroad.

City controlled the remainder of the match and claimed their first clean sheet in the Champions League this season.

“I don’t think the team were nervous, it is just Manchester City are the best in the world, and they killed us every time they came into our box,” Sporting coach Ruben Amorim said.

“The quality of the players and the manager was the difference.”

Information from Reuters was included in this report.