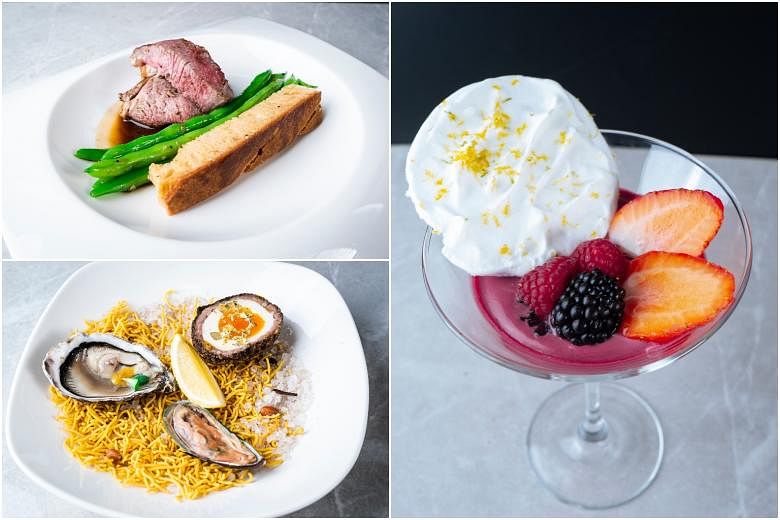 Food upcycling – a hot trend which surfaced last year and which involves repurposing food waste into edibles – is cost-effective and earth-friendly, but who would shell out money to feast on food scraps?

But one year on, Dr Kwan’s dinner event, named WellSpent Evening, has become a monthly affair and she has since hosted 10 of them. Each instalment, which has a different theme, also features a produce market, workshops and high tea.

When The Straits Times attended the most recent edition last Sunday (March 13), there were 55 diners – half of whom were invited guests.

A six-course British-themed dinner, priced at $78 a head, was served. Dishes resembling elevated British pub grub – such as scotch egg, fish and chips and lamb saddle – were made from, but not limited to, crustacean shells, eggshells, fruits and vegetable peels as well as by-products of the brewing process like spent coffee and tea leaves.

When the dishes were whisked to their tables by first-year culinary students, diners were drawn into a game of “guess the upcycled ingredient”.

For instance, the scotch egg – traditionally swaddled in meat and bread crumbs – was coated in spent coffee grounds, imparting subtle and smoky flavours. The lamb saddle was roasted with moromi, the waste from soya sauce production that is lower in sodium content. Swimming inside the brown sauce of dark ale and moromi, the mound of meat was an umami bomb.

Do not call Dr Kwan, 70, a mad genius. The savvy Burma-born Chinese entrepreneur, who moved to Singapore in 1973 and started food businesses, is driven by a higher purpose.

“I thought it would be a very impactful mission for our students. They buy, cook, serve and waste. By advocating upcycling, I could connect the other half of the circle, making it a circular economy,” the Singapore permanent resident said in an interview with news website Rice Media last year.

The idea was planted in her head in 2017, after she attended the Worldchefs Congress in Thessaloniki, Greece.

There, she met Professor Herve This, considered the father of molecular gastronomy, and learnt about the French physical chemist’s radical approach to cooking using science.

The process, called Note-to-Note, involves stripping each ingredient to its basic flavour and colour compound before reconstituting it to form a new dish. It has been touted as the future of food because it can feed more people, prevent food spoilage and save energy.