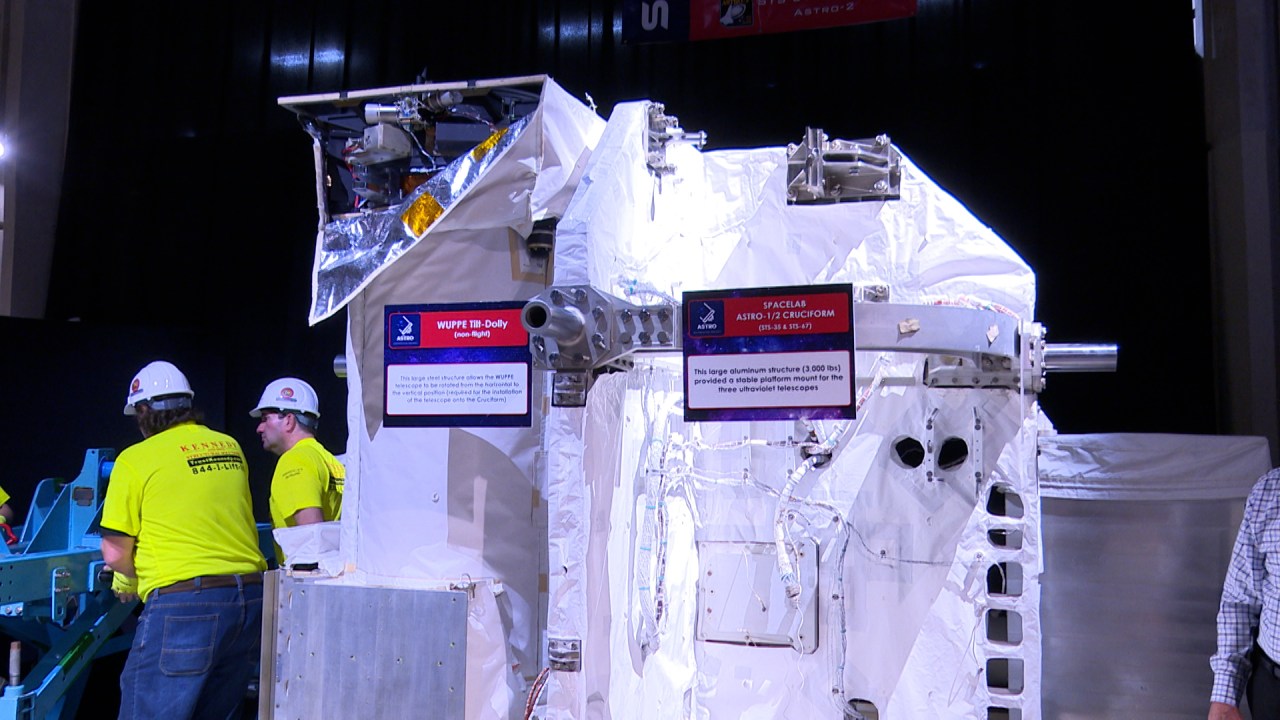 HUNTSVILLE, Ala. (WHNT) — Space history was made on Tuesday. Two pieces of Spacelab were placed back together at the U.S. Space & Rocket Center as part of the Astro Restoration Project.

The Wisconsin Ultraviolet Photo Polarimeter Experiment (WUPPE) telescope was reattached to the Astro cruciform. The cruciform is the center component that three separate UV telescopes were attached to during the Astro-1 and Astro-2 missions.


Rocket that will crash into moon was not built by SpaceX, experts now believe

The process of reattaching the WUPPE used a forklift and a team of volunteers to carefully guide it into place. The other two telescopes, the Hopkins Ultraviolet Telescope (HUT) and Goddard Space Flight Center’s Ultraviolet Imaging Telescope (UIT), will be restored and attached later this year.

Getting to the point where these pieces were restored and reattached was a dream for Astro Restoration Project volunteers. Project Lead, Scott Vangen, said the project came about because they wanted to ensure space history was preserved.

The Astro missions were aboard the space shuttle Columbia in 1990 and then Endeavour in 1995. By the early 2000s, the components were no longer needed. The three telescopes attached to the Astro cruciform were returned to the scientists who designed and built them. The rest of the hardware was decommissioned by NASA.

Vangen said getting all of the pieces for the restoration project was a project in itself, “We started collecting the bits and pieces for Astro, with the anticipation that there will be a day in the future that we think we can put this all back together”.

Vangen says the pieces provide history into space exploration and offer insight into how much science and technology has evolved over the past few decades. One sensor that attaches to the WUPPE weighs around 500 pounds.

Vangen added the technology is equivalent to the CCD camera on a cell phone.

The Astro Restoration Project is entirely volunteer-based. It also partners with the HUNCH Program, which allows students to work on actual parts used in the restoration efforts.

Jaidon Jamison is an 11th-grade student in Decatur. In his classes and through the HUNCH program, he helped create some of the finishing pieces for the restoration project.

Jamison told News 19, “I feel a sense of accomplishment and pride to be able to contribute to something of this nature.”

When the restoration project is complete, the component will be displayed at the U.S. Space and Rocket Center for a period of time. After that, it will be moved to the Udvar Hazy Center, which is a branch of the Smithsonian Air & Space Museum, located just outside of Washington D.C.

Jamison said he is looking forward to taking his “future children” to the museum in the coming years and showing them the project he had a hand in.