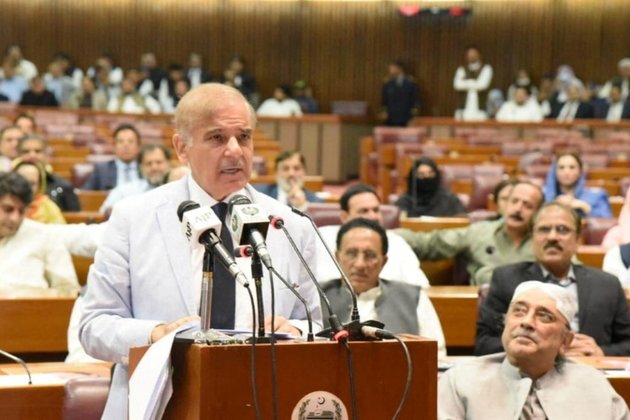 Sharif secured 174 votes, two more than required to win the election in the 342-member National Assembly, or lower house of parliament. He later took the oath of office, administered by acting President Sadiq Sanjrani.

The 70-year-old prime minister was chosen unopposed by an opposition alliance after lawmakers of Khan’s erstwhile ruling Tehreek-e-Insaf (PTI) Party boycotted the voting process and left the house, accusing the United States of being behind the toppling of their government.

Qasim Shah Suri, deputy speaker of the legislature, a member of PTI, refused to chair Monday’s session for the election of the country’s chief executive, citing the alleged “foreign conspiracy” behind Khan’s ouster.

The special house session was eventually presided over by Ayaz Sadiq, a senior lawmaker of Sharif’s Pakistan Muslim League-Nawaz (PML-N) Party, who announced the outcome of the vote.

Minutes before the vote, PTI legislators resigned en masse from the lower house in protest.

“We are announcing we are all resigning,” Shah Mahmood Qureshi, former foreign minister and vice president of Khan’s party, told the house. The resignations, if accepted, will require fresh by-elections in well over 100 seats.

In his televised address to the house after winning the vote, Sharif again rejected the claim that a foreign conspiracy had toppled the PTI government, calling the allegation a ‘lie, drama and fraud.”

He said he intended to call a closed-door meeting of relevant security-related parliamentary committees to investigate the allegations.

‘This debate should be laid to rest, and I will make arrangements for the in-camera session at the earliest,’ Sharif said. He also termed the country’s economic situation ‘very serious,” blaming his predecessor and vowing to improve it.

An anti-corruption court was due to indict Sharif and his son in connection with a high-profile money laundering case on Monday, but the indictment was deferred until April 27, and their pre-arrest bail was also extended to that day.

‘There can’t be any bigger insult to this country” when a person facing corruption cases worth ‘billions of rupees is selected, elected as prime minister,” Khan told reporters after attending a meeting of his party lawmakers ahead of Monday’s vote.

The 69-year-old former cricket star was voted out of power early Sunday after a nearly 14-hour-long session of the assembly, making him the first prime minister to be ousted by a no-confidence vote in Pakistan. No democratically elected prime minister has served a full five-year term since the founding of the country in 1947.

The repeatedly delayed no-confidence vote against Khan was held after the country’s Supreme Court ruled last week that the prime minister had acted in violation of the constitution when he blocked the vote and then dissolved parliament.

The embattled Pakistani leader defended his blocking of the vote, alleging it was the result of U.S. meddling in his country’s politics.

Sharif was for years chief minister of the country’s most populous Punjab province, with a reputation for being an effective administrator.

He is the younger brother of former Prime Minister Nawaz Sharif, who was removed from office by the Supreme Court in 2017 for failing to disclose a foreign bank account and was subsequently sentenced to a10-year jail term on corruption charges related to his four luxury London flats.

In November 2019, the Khan government allowed Nawaz Sharif to leave prison to spend six weeks in Britain for urgent medical treatment. He has not returned to Pakistan.

Khan remained defiant following his removal from office and vowed to lead a sustained protest campaign against the new government.

Tens of thousands of his supporters protested his ouster Sunday night across major Pakistani cities, including the capital, Islamabad.

The rallies went on until early Monday, with protesters peacefully blocking roads and chanting slogans against opposition parties and America.

“Never have such crowds come out so spontaneously and in such numbers in our history, rejecting the imported govt led by crooks,” Khan said on his Twitter account late on Sunday.

During his nearly four years in power, Khan consistently maintained he had inherited a bankrupt economy from previous governments of the opposition Pakistan Peoples Party and PML-N, accusing them of rampant corruption and laundering billions of dollars into foreign bank accounts.

The Sharif family and PPP leaders reject the corruption charges as politically motivated. In fact, Pakistan’s major political parties have traded corruption allegations during their respective stints in power from 2008 to 2018.

Khan lost his majority in the run-up to the no-confidence vote after 20 lawmakers from his party defected amid accusations that they were bribed into changing their loyalties. Main coalition partners also switched sides and joined the opposition, leaving Khan to fight for his political survival.

The vote ultimately proceeded after senior military generals reportedly held an emergency meeting with Khan just before midnight on Saturday and allegedly “coerced” him into ending his opposition to the parliamentary process.

Khan’s aides and the army both rejected the reports as baseless.

Khan was elected in 2018, promising to root out corruption and introduce reforms to fix economic troubles in the country of about 220 million people.

The military ruled Pakistan for almost half of its nearly 75-year history after staging coups against elected governments. Direct and continued indirect military interventions are blamed for the fragility of democracy in the nuclear-armed South Asian nation.

Critics say Khan rose to power with the military’s help but lost its support after a disagreement over the appointment of the country’s spy chief and foreign policy matters, including ties with the U.S.

“Opposition parties saw weakening relations between Khan and the military as an opportunity” to bring about Khan’s ouster, said Adam Weinstein, a research fellow at the Washington-based Quincy Institute for Responsible Statecraft.

“Parties tend to align with the security establishment when it suits them and challenge it when convenient,” Weinstein noted.

Through his nearly four years in office, Khan criticized Washington for what he said was a flawed U.S. war in Afghanistan and hailed the Taliban takeover of the neighboring country last year.

He visited Russian President Vladimir Putin on the day Russia invaded Ukraine and has refused to condemn the Russian aggression. He has criticized the West in public meetings for pressuring his government to denounce Putin.