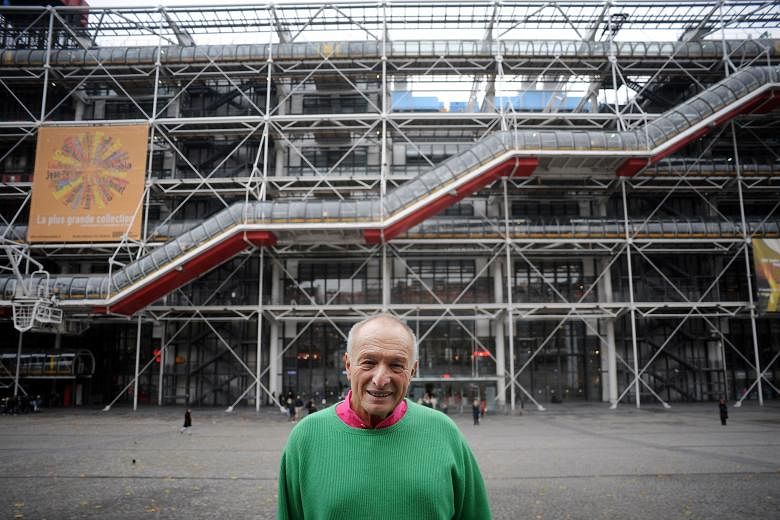 NEW YORK (NYTIMES) – Richard Rogers, a Pritzker Prize-winning British architect whose inviting, colourful modernism forever altered the cityscapes of Paris and London, died on Saturday (Dec 18) at his home in London. He was 88.

His son, Roo Rogers, confirmed the death. No cause was given.

With his striking designs for the tubular Pompidou Centre in Paris; the vast Millennium Dome in London, which seemed to hover like an alien spaceship; and the brash Lloyd’s of London building, with its soaring atrium, Rogers turned architecture not just inside out but also on its head.

When he was awarded the Pritzker, architecture’s highest honour, in 2007, the jury cited his “unique interpretation of the modern movement’s fascination with the building as machine” and said he had “revolutionised museums, transforming what had once been elite monuments into popular places of social and cultural exchange, woven into the heart of the city”.

He did have his critics, however, particularly early on.

One rainy day in 1977, the Italian-born Rogers was standing on a street in Paris admiring the soon-to-open Pompidou Centre – then a beleaguered, much pilloried, radical-looking structure he had designed with his friend Italian architect Renzo Piano – when an elegantly dressed woman offered him shelter under her umbrella. She asked him if he knew who had designed the building. When he announced proudly, “Madame, it was me!” he recalled in his 2017 memoir, A Place For All People, she whacked him on the head with the umbrella and marched off.

Six years earlier, Rogers and Piano had entered a competition to design that cultural centre. They called their design, with its transparent steel carapace, tubular escalators and exposed systems painted in primary colors, “a place for all people”.

Yet the whole endeavour seemed doomed from the start: Their submission was initially returned because of insufficient postage. After they won the competition, there was constant, vitriolic opposition to their funky, gutsy design, deplored by many as a desecration of the Paris skyline.

When the Pompidou Centre finally opened, in January 1977, reviews were mixed but the public loved it, and people lined up by the hundreds each day. Seven million visited that year, more than attended the Louvre and the Eiffel Tower combined.

Writing in The New York Times, art critic Hilton Kramer called the building “one of the most breathtaking architectural accomplishments of recent times”.