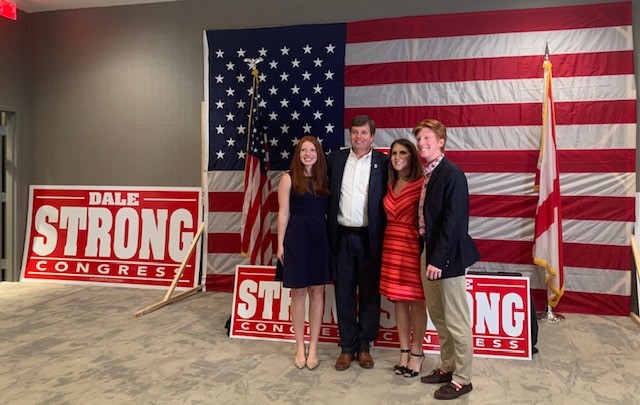 HUNTSVILLE, Ala. (WHNT) — Dale Strong has won the Republican nomination for the U.S. 5th Congressional District race set for November 8, 2022.

Below are the results by county.

In a statement shared with News 19, Wardynski hinted at low voter turnout in the runoff election.

He’s not wrong. Of the more than 3,000,000 registered voters in the state of Alabama, only 464,577 cast a ballot, according to the Alabama Secretary of State’s office. That puts statewide voter turnout to 12.74 percent.

The race was called in favor of Dale Strong shortly before 9:00 p.m. on election night.

News 19 received the statement below from Wardynski just after 8:45 p.m.

“The voters of District 5 have spoken.  Some voters spoke through their ballot, a larger group through their silence.  88 percent of voters gave their proxy to the 12 percent who participated in the runoff election.  Through their actions, Mr. Strong will advance to the General Election in November, and we continue the great tradition our founders began 234 years ago of government by the people.  In the fullness of time, we shall see it will also be a government for the people. I thank all of my supporters for their votes, their encouragement, their hard work, and their friendship.

God save the United States of America, our forces around the world, and those patriots who keep the noble ideals of limited government, liberty, and prosperity guided by divine providence in their hearts.”

News 19 attended Dale Strong’s election night event, which he had dubbed a “victory party” prior to the polls closing.

After the race was called, Strong took the stage to thank his family and supporters.

“We accept the Republican nomination to be the next congressman from Alabama, here we go!” Strong said.

News 19 interviewed Strong after his speech and asked about campaign plans ahead of the November general election.

“We’re going to enjoy this race,” he said. “The people overwhelmingly, if you look at the numbers, especially in the primary showed up, we’re very pleased with those numbers.”

“I can promise you by the look of this crowd here, they’re going to show up again in November,” he said.

Democratic candidate Kathy Warner-Stanton secured her nomination in the primary in May, and will now be facing Strong.

Brown said that race is already leaning in favor of Strong.

“I’m the realist, try to be the realist,” Brown said. “This is a heavily Republican district, it will take nothing less than a political miracle for Dale Strong not to be elected to the congress in November.”