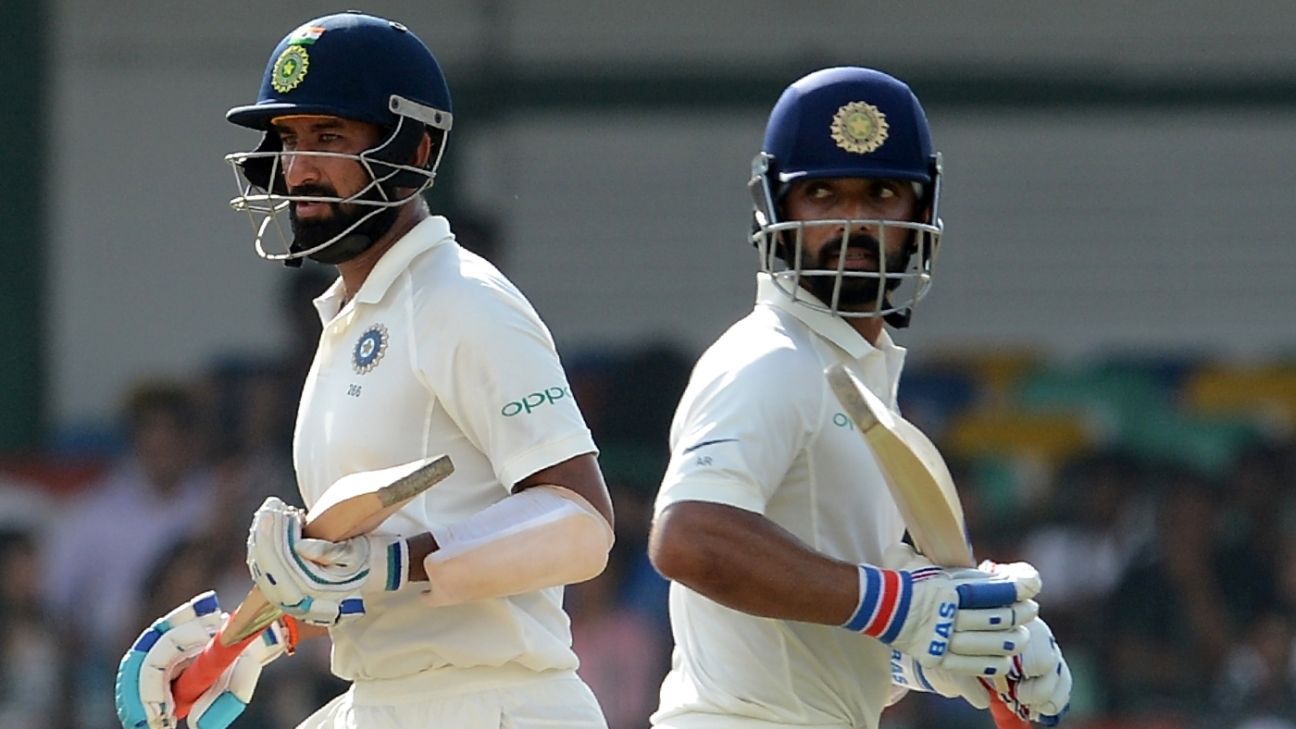 Cheteshwar Pujara, Ajinkya Rahane, Ishant Sharma and Wriddhiman Saha have been dropped for the two-Test series against Sri Lanka. Rohit Sharma will lead India in the Tests, which makes him India’s all-formats captain, but the selection committee will watch his fitness closely and look to groom new leaders under him.

Chetan Sharma, the chairman of India’s selection committee, said he had told all four of the players dropped “immediately after the South Africa series” that they won’t be considered “just for these two Tests”. Chetan also said that he requested them to play in the Ranji Trophy so that the selectors know where their game and fitness is at. Rahane has scored a hundred against defending champions Saurashtra, Pujara bagged a duck, and the other two have not played in the first round of India’s premier domestic first-class tournament.

Pujara and Rahane have been under the scanner for a while. Pujara last scored a century on the 2018-19 tour of Australia. Rahane has just one century since October 2019. Saha and Ishant no longer command a place in the first XI when everyone is available. However, Chetan said the selectors were not closing the door on any of them.

“Why not?” Chetan asked when asked if they could force their way back into the Test squad. “They have played for the country for so long, why not? Ajinkya got a hundred yesterday. A cricketer’s graph goes up and down. It is very important for the selectors to take care of the cricketers when they are going through a rough phase. You can’t just strike their name permanently.

“In the meanwhile let’s see how the others do. We are nobody to close doors on anybody. We have told them a period, I have requested all four of them to play Ranji, which is very important because the selectors are looking closely at Ranji Trophy. That is how we know where you are at. We spoke to the four of them immediately after South Africa, and told them we are not picking them for these two matches.”

The selectors have brought back Ravindra Jadeja, who got injured during the first Test against New Zealand but is fully fit now, but were cautious with R Ashwin, who has been picked in the squad but will play only if fully fit. He is currently undergoing rehab at the National Cricket Academy in Bengaluru. The team management will look at his fitness in Mohali before deciding if he plays. Jayant Yadav is the offspinner in the squad should Ashwin not be ready.

Axar Patel is still not fit, which has given the selectors an opportunity to give Uttar Pradesh left-arm spinner Saurabh Kumar a maiden call-up after he impressed them on the A tour of South Africa and stayed back as a standby for the Test series that followed. Kuldeep Yadav, who recently made his limited-overs comeback, was back in the Test squad too. “This selection committee wants to give a long run to the players it picks,” Chetan said. “If he has performed so well for us in the past, if he didn’t play because of some circumstances, we have to give him a longer run.”

The team announcement also ended uncertainty around India’s new Test captain. The only doubt, really, was whether to make Rohit the captain in all three formats, given the nature of his recurring hamstring injury. Chetan, though, said the selectors were satisfied with his fitness at the moment, and were also concsciously looking to groom new leaders during whatever time they get from Rohit at the top.

“Rohit is the No. 1 cricketer of our country,” Chetan said. “He plays all three formats. Most important is, how we manage Rohit. These days all cricketers are professionals. They know their body, they manage it well. Now there is no problem at all. Time to time we will stay in talks with him [regarding fitness and rest]. If such a big cricketer becomes captain, automatically we, as a selection committee, feel we can groom future captains under him.”

Keeping future long-term captaincy in mind, the selectors seem to have identified Rishabh Pant, Jasprit Bumrah and KL Rahul as the core leadership group. Rahul captained a Test in the absence of Rohit and Kohli. Pant was the vice-captain during the West Indies series. Bumrah will be the vice-captain against Sri Lanka.

Rahul, who is still recovering from injury, is not part of the squad for the Tests or T20Is against Sri Lanka, with Washington Sundar ruled out similarly. Chetan indicated that if any of them recovered earlier than expected, they would be added to the squad. “Washington Sundar and KL Rahul, according to the medical staff, have so far been ruled out of the Sri Lanka series, T20Is and Test matches, unless they recover a little early,” he said.