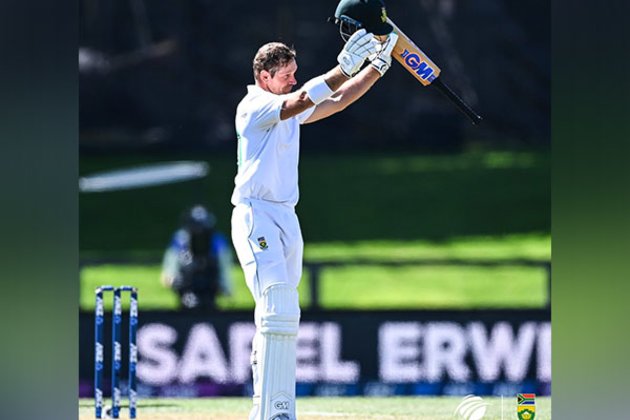 Christchurch [New Zealand], February 25 (ANI): After hitting his maiden Test Century, South Africa batter Sarel Erwee said that he feels fortunate to play international cricket and will be trying to be better with each and every game.

Erwee achieved this feat on Day 1 of the ongoing second Test against New Zealand here at the Hagley Oval on Friday.

“I am very fortunate that I had a year to settle into the squad and find my feet preparation-wise and find out what it takes to do half-decently or do well in this game. That is just through the help of teammates. Preparation and fronting-up is key,” he added.

After a one-sided loss to New Zealand in the first test match of the series, South Africa has rebounded with a strong Day 1 performance where their team has a total of 238-3 at the end of day’s play.

South Africa took the crease determined to hold their ground after the dismal performance in the first Test that saw them lose to New Zealand by an innings and started out well.

The opening wicket partnerships lasted for 119 runs between captain Dean Elgar and Sarel Erwee. Aiden Markram would chip in with a solid performance after Elgar was dismissed to help South Africa to a strong total. The day ended with Temba Bavuma and Rassie van der Dussen on strike. Tim Southee, Matt Henry and Neil Wagner all took one wicket on the day.

New Zealand will look to limit South Africa’s time with the bat on Day 2 as they look to close in on a historic test series win over South Africa, a team that has fared really well against New Zealand in their history.

Day 2 of the Test match between New Zealand and South Africa will take place on Saturday and be streamed live and exclusively on Amazon Prime Video. (ANI)