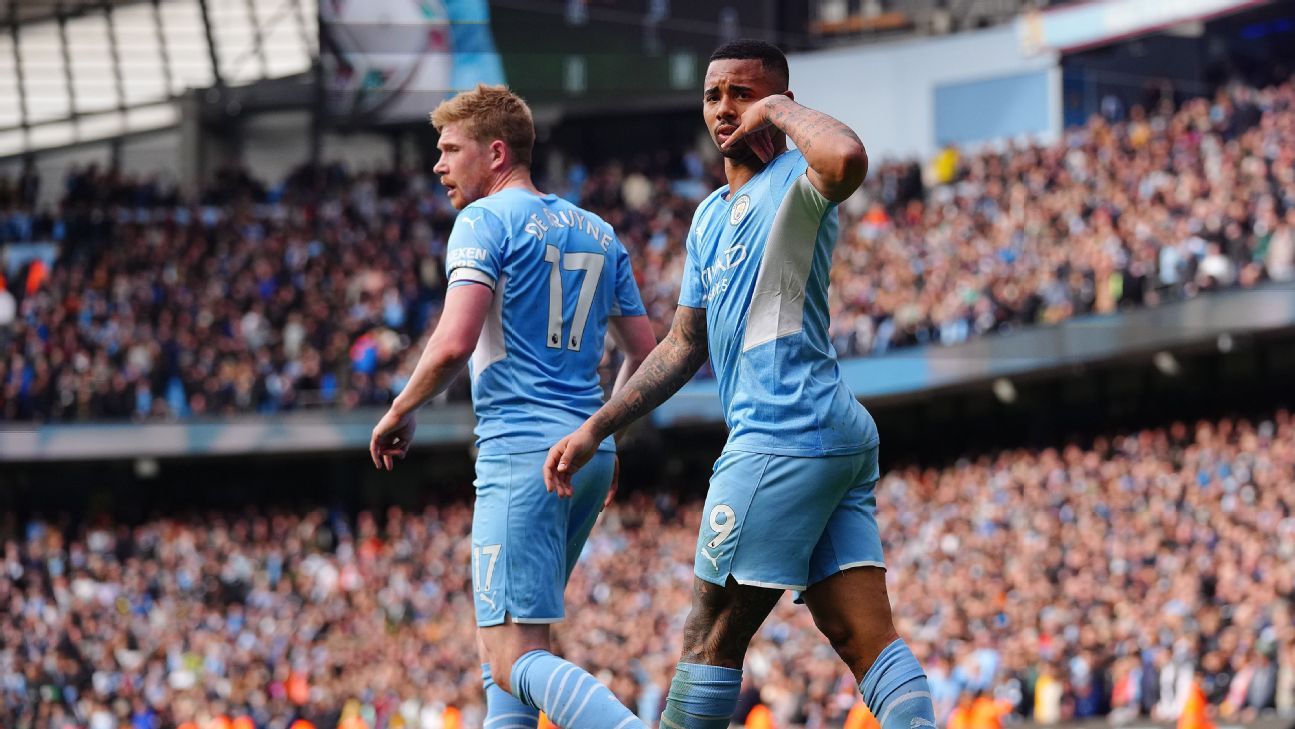 MANCHESTER, England — Manchester City and Liverpool played out a 2-2 draw Sunday in the Premier League. Here are three thoughts on the game.

Manchester City and Liverpool played out a pulsating draw at the Etihad Stadium, and we are still no closer to knowing who will lift the Premier League title this season.

City twice took the lead through Kevin De Bruyne and Gabriel Jesus but were were pegged back first by Diogo Jota and then Sadio Mane to ensure the two teams remain separated by just a point at the top of the table with seven games to go.

Pep Guardiola and Jurgen Klopp — whose teams also drew 2-2 at Anfield in October — will have to do it all over again in the FA Cup semifinal at Wembley in six days’ time and could yet meet in the Champions League final in Paris at the end of May.

The result means both teams are still vying for their own piece of history; Man City trying to replicate Manchester United’s treble in 1999 and Liverpool attempting to become the first English club to win the quadruple of Premier League, Champions League, FA Cup and Carabao Cup.

Man City and Liverpool will have to be separated eventually when it comes to handing out the trophies but for now they remain locked together after another fierce and entertaining encounter.

2. Pep Guardiola springs a surprise and it pays off

Jurgen Klopp probably wasn’t expecting Pep Guardiola to hand Gabriel Jesus his first Premier League start since Jan. 1, but that’s what he did and you can’t argue with the outcome. Jesus had already created a fantastic early chance for Raheem Sterling when he pounced on Joao Cancelo’s cross from the left to put City 2-1 up just before halftime with his first league goal since September.

Despite being the only recognised striker in the City squad, Guardiola has had success playing him on the right wing in the past. It was in that position that he played a key role in the 2-1 win over Real Madrid in the Bernabeu in the 2019-20 Champions League knockout rounds and he had two assists in the 5-0 win over Norwich at the Etihad Stadium in August when he was the best player on the pitch.

The Brazilian has only scored seven goals all season but the majority have been big ones. He scored against Arsenal in August and the only goal in the 1-0 win over Chelsea at Stamford Bridge in September. In November, he came off the bench to score the winner against Paris Saint-Germain at the Etihad Stadium and he can now add Liverpool to his list.

There is no doubting what Mohamed Salah gives to Liverpool but they are far from a one-man team. If Salah doesn’t sign a new deal at Anfield and leaves as a free agent in the summer of 2023, Jurgen Klopp’s side are more than capable of soaking up his absence and his performance at the Etihad on Sunday is proof.

Salah was on the edges of the action for much of the game while others in the front three, Diogo Jota and Sadio Mane, got the goals. Liverpool have recruited well to bring in Jota and Luis Diaz to ensure there isn’t an over-reliance on Salah and it means, should the Egypt international depart, they are ready-made replacements to fill the void.

It would be a blow to lose a player who is again on course to score 30 goals in all competitions again this season but it isn’t the nightmare scenario some are predicting. Yes, he’s important — he showed his class with the pass for Mane’s goal — but he’s only scored once since the end of February and Liverpool still remain in the hunt for four trophies.

The good news for Liverpool and the board is that Salah is not in a position to make out-of-this-world demands over his contract.