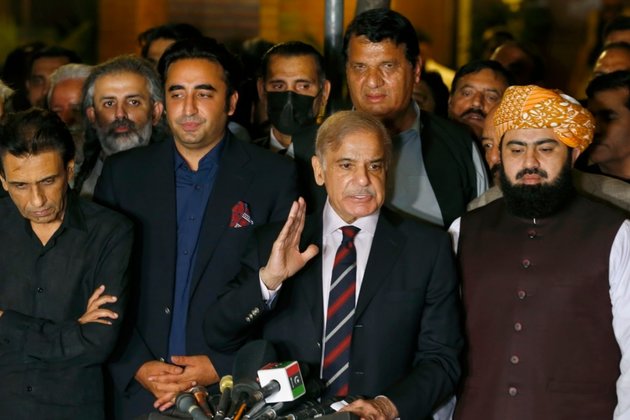 Islamabad – Pakistan is set to vote in opposition leader Shehbaz Sharif as the country’s next prime minister Monday, a day after incumbent Imran Khan lost a no-confidence vote, bringing down his nearly four-year-old coalition government.

The 342-member National Assembly, or lower house of parliament, voted on the no-confidence motion against Khan early Sunday, with 174 legislators from a united opposition supporting it, two more than required to force the former cricket star from office.

Sharif led the opposition bid to oust Khan, and later submitted his nomination to the legislature for the prime minister’s election, which the 70-year-old politician is widely expected to win.

Khan is the first prime minister to be ousted by a no-confidence vote in Pakistan, but no democratically elected prime minister has served a full five-year term since the founding of the country in 1947.

The repeatedly delayed no-confidence vote against Khan was held after the country’s Supreme Court ruled last week he had acted unconstitutionally when he previously blocked the no-confidence vote, and subsequently dissolved parliament.

The embattled Pakistani leader had defended his blocking of the vote, alleging that the no-confidence motion was the result of the United States meddling in his country’s politics.

Washington rejected the charges, saying there was “no truth” to them.

Khan had lost his majority in the run-up to the vote after 20 lawmakers from his ruling Pakistan Tehreek-e-Insaf (PTI) party defected. Main coalition partners also switched sides and joined the opposition, leaving him to fight for his political survival.

Despite its ouster, the PTI remains the largest political force, with around 135 seats in the National Assembly barring the defected lawmakers.

The no-confidence vote ultimately went ahead reportedly after a meeting between Pakistan’s powerful army chief, General Qamar Javed Bajwa, and Khan amid criticism the delay in the parliamentary process was deepening days of political turmoil.

Neither Khan nor the military commented on the reported meeting.

Khan’s critics say he had risen to power with the help of Pakistan’s military but lost its crucial support in recent months after developing differences over key security appointments and foreign policy matters, encouraging the opposition to stage his ouster.

The deposed prime minister took to Twitter on Sunday for the first time after his ouster to reiterate a “foreign conspiracy” had toppled his government.

“Pakistan became an independent state in 1947; but the freedom struggle begins again today against a foreign conspiracy of regime change. It is always the people of the country who defend their sovereignty & democracy,” Khan said.

The military ruled Pakistan for almost half of its nearly 75-year history after staging coups against elected governments. Direct and continued indirect military interventions are blamed for the fragility of democracy in the nuclear-armed South Asian nation.

Khan was elected in 2018, promising to root out corruption and introduce reforms to fix economic troubles facing the country of about 220 million people.

“Khan’s choices in Cabinet members and economic mismanagement helped erode some support. Then opposition parties saw his dampening relations with the military as an opportunity to strike,” Weinstein said.

Sharif was for years chief minister of the country’s most populous Punjab province, with a reputation for being an effective administrator.

While on the domestic front, the key challenge facing the next prime minister will be a financial crisis and inflation that Khan was unable to address, repairing ties with the United States would be a key foreign policy mission in the wake of his predecessor’s relentless criticism of Washington over the alleged regime change plot.

Through his nearly four years in office, Khan had criticized Washington for what he said was a flawed U.S. war in Afghanistan and hailed the Taliban takeover of the neighboring country last year.

Khan visited Russian President Vladimir Putin on the day Russia invaded Ukraine. Khan refused to condemn the Russian aggression and slammed the West in public meetings for pressuring his government to denounce Putin.

Coincidently, an accountability court was due to indict Sharif and his son in connection with a money laundering case Monday (April 11), the same day as his swearing in as Pakistan’s 23rd prime minister. Local media reports say the case is likely to be pushed back.

“It is a stigma on Pakistan that a person who is supposed to be indicted tomorrow will be taking oath as prime minster instead,” said Sheikh Rashid Ahmed, who was the interior minister in Khan’s deposed cabinet, while addressing a public rally Sunday.

Sharif rejects corruption charges against him as politically motivated.

Some information in this report came from Reuters.