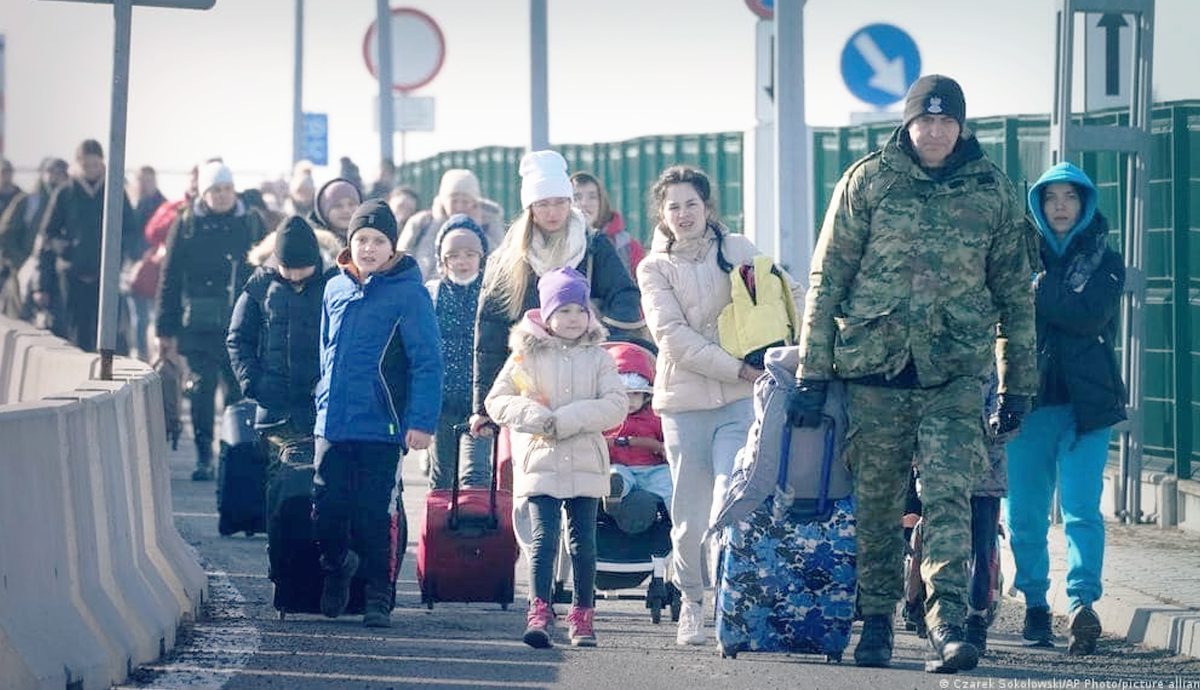 At a time when the Canadian government is promising to bring in 40,000 Afghan refugees and an unlimited number of Ukrainians fleeing the war, dozens of red flags signal that the regular immigration system in Canada and Quebec is out of control.

Let’s start with the number of files awaiting processing at the federal level. Citing numbers from Immigration Refugees Citizenship Canada, the CBC reported on March 21 that more than 1.8 million immigration files – applications for permanent residency, temporary study and work permits and citizenship – were waiting to be processed as of February 1.¹  Bit by bit the numbers are coming down in some categories. The number of applications for permanent residency had fallen by about 30,000 since the end of October to 519,030, including skilled workers, family reunification, refugees and asylum seekers. Applications for citizenship, down to 448,000, fell at the same rate. At this rate, if new applications aren’t added to the pile, it will take almost five years to process them all.

But new files are being added to the pile. The number of applications for temporary permits awaiting processing increased by 73,000 between the end of October 2021 and the beginning of February 2022, and the federal government continues its mission to ease the conditions for study and work permits.

On April 11, there were more than two million applications in the inventory, of which 1.1 million were for temporary permits, an increase of 230,000 since mid-March.

These people will generate a large portion of the new admissions because the government is doing everything it can to facilitate the transition from temporary to permanent status. In 2021, almost half of all permanent immigration to Canada, and approximately 75 per cent of the economic class, was made up of people who previously held these types of permits.

The increase in the number of people with temporary status will inevitably force an increase in permanent immigration targets, because applications for permanent residency will surpass the targets set by the Canadian and Quebec governments. It would be political suicide to refuse to process these applications. It would mean that the temporary permits of people who have been integrated into the country for years, studied here, worked, paid their taxes and started to raise their families would expire, and they would have to leave.

In the end, this means that we cannot expect to see a meaningful drop in the inventory of immigration applications any time soon. It’s like trying to fill the infamous bucket with a hole in the bottom.

This huge inventory of applications results, of course, in very long waiting times, particularly for permanent residency (as well as citizenship), where the wait is well over two years. The exception is for those with a temporary status applying for permanent residency through the Canadian Experience Class, for which the wait time, at the time of writing, is eight months.

Speeding up processing times and reducing inventories requires more officers, who need to be recruited, equipped and trained, which takes time. It also requires a more effective electronic processing system, which will also take at least several months to put in place, assuming there are no major glitches along the way.

It is not surprising that the government has had trouble putting procedures in place to welcome tens of thousands of Afghans and Ukrainians.

Receiving more applications means increased costs. The federal government had already announced $85 million in the fall of 2021 to reduce inventories. Then, the budget unveiled on April 5 provided for:

These unprecedented increases in expenditures of almost $3.8 billion over five years, followed by $735.3 million annually, are broken down essentially by immigration category, but it is not really clear how much will go toward new electronic processing systems, how much to human resources and how much toward actually ensuring welcoming and resettlement services on the ground either in transfers to provinces or in grants to community organizations.

Biometrics may have become a rite of passage for security reasons, but access will have to be greatly facilitated with increasingly urgent international migrations. According to reports, this has been causing huge headaches, not only for Ukrainians but for immigration applicants in general, especially during the pandemic. This will also add to costs.

Moreover, it will take legislative action to allow automated and machine-assisted processing of citizenship applications and to require the electronic submission of asylum claims.

Proliferation of pathways for entering Canada and ad hoc policies

With the current world context of conflict, climate change and communicable disease, it is clear that any modern immigration policy needs to be flexible. But it raises the question of whether simply multiplying the pathways to temporary and permanent residency without first consulting and seeking consensus can be successful in the long run.

I have written previously about the dozens of pathways to permanent residency – federal and provincial – that were created across the country in recent years, as well as the hundreds of types of temporary permits made available, particularly under the International Mobility Program.²

We are now seeing a proliferation of “public policies.” This mechanism, provided for in the federal law on immigration, allows the minister to change the rules for granting permanent residency or to apply exemptions to other rules if he or she “is of the opinion that it is justified by public policy considerations.”³  In fact, we see that the device is often used to modify the rules that apply to temporary immigration.

These “public policies,” adopted by ministerial decree, seem to have been used very infrequently for several years, but recently the numbers have taken an extraordinary leap, as illustrated in figure 1.

They typically target particular situations and very specific clienteles, such as people with temporary status caught up in the consequences of the fires in British Columbia or private sponsorship of refugees from Syria and Iraq. There have been several in the last two years to protect the status of foreign nationals caught up in travel restrictions during the pandemic. But this type of ad hoc policy can also be quite general in scope: for example, a form of exemption from language requirements for people who cannot be assessed because of a physical or mental disability.
There is a political and potentially discriminatory dimension as well. Thus, the “temporary public policy to exempt certain Hong Kong residents from work permit requirements,” updated in February 2021, aimed to “attract educated Hong Kong youth to Canada, where it is expected that their human capital and international experience will contribute to Canada’s economic, social, and cultural fabric. At the same time, Canada’s response demonstrates its solidarity with other like-minded allies, and its robust support for, and defense of, democratic values.”⁴ This is clearly a valid humanitarian gesture, but the reasoning could be applied to many other regions in the world.

The federal government is also using its control over temporary immigration to change rules. It made an announcement on April 1 to relax certain requirements of the Temporary Foreign Worker Program across Canada. In 2016, it created a new open permit under the International Mobility Program for employers outside Quebec who hire French speakers from abroad. Since francophone immigration is just as important in Quebec, if not more so, it is not clear why Quebec employers are excluded.

There are instances of inexplicable inconsistency. For several years, the federal government has been touting its determination to encourage foreign students to stay permanently in the country by facilitating their path to permanent residency. And yet it never amended the regulation requiring that people applying to study in Canada demonstrate that they will leave the country at the end of their stay. This has resulted in large numbers of study permit applications being refused, especially from African countries, because the intention to leave was not clear enough in the application. Another unintended result of this situation is that, given that many of the African countries are members of the Francophonie, these refusals are affecting government efforts to attract francophone immigration inside and outside Quebec.

Different processes are being used for different groups. The announced 40,000 Afghans are arriving as refugees. To be recognized as a refugee, the person must be outside their country of origin and officially recognized by the United Nations refugee agency. People accepted under this program receive support for health services, initial lodging and other integration services. For Ukrainians fleeing the war, a special three-year temporary residency permit has been created. Since they are not entitled to the same level of service as recognized refugees, the federal government had to announce special temporary funding to help with their initial settlement needs.

Finally, each time a new priority or process is announced, the human and financial resources initially allocated to the processing of regular files and applications needs to be redirected. The decisions and the new processes must be explained to the staff, the new procedures – electronic and otherwise – put in place, websites adjusted, information officers trained to answer questions, notices distributed to stakeholders, etc.

Lack of consultation with the provinces

Under current law, the federal government is required to undertake consultations with the provinces on the multiyear planning of immigration levels. But there is no obligation to consult on temporary immigration or “public policies,” and hence there has been no systematic open consultation with provincial governments prior to the announcement of these decisions. This means that no consideration is given to housing or childcare capacities on the ground, or to the effect of this rapid population increase on schools, health and social service systems or public transit.
Different types of immigration require different services. Well-meaning Canadians and Quebecers are opening their homes to new arrivals, particularly from conflict zones. Aside from the cultural differences, many of these people, adults and children alike, will suffer posttraumatic stress disorder for which the sponsors are not prepared. Without proper planning and consultation with the provinces that provide these services, the fallout could be problematic, not only for the human beings concerned but politically as well.

The usual argument for increasing temporary immigration is to resolve labour market shortages. These shortages vary significantly from one region, rural or urban, to another. However, for the most part, specific local considerations are not identified, and there is no way to ensure any link between the expertise and work experience of these newcomers with open work and study permits and local labour market needs.

Despite its special powers recognized in the Canada-Quebec Agreement on Immigration, Quebec is caught in the net of the improvised federal system in many respects. It has no control over federal processing times. Like the federal government, it too improvises new programs that take longer than expected to implement and do not produce the expected results.

It also encourages temporary immigration, which increases the number of applications for Quebec Selection Certificates (QSC), a required step toward permanent residency for people wanting to settle in Quebec. The delivery of QSCs continues apace, and then these people, having passed the months-long Quebec process, become victims of the long federal processing times when they apply for their permanent resident visas.

The essential need for a clear vision and efficient infrastructure

Immigration is a fundamentally human project, transforming the lives of people and the cohesion of societies around the world. The success of this crucial project – for the people who migrate, for Canadian and Quebec societies, and for the countries of origin – requires a clear political vision supported by an efficient legislative and administrative infrastructure. Can we be confident that our reputation as a “welcoming” society will hold up with an increasingly improvised and often inefficient immigration system?