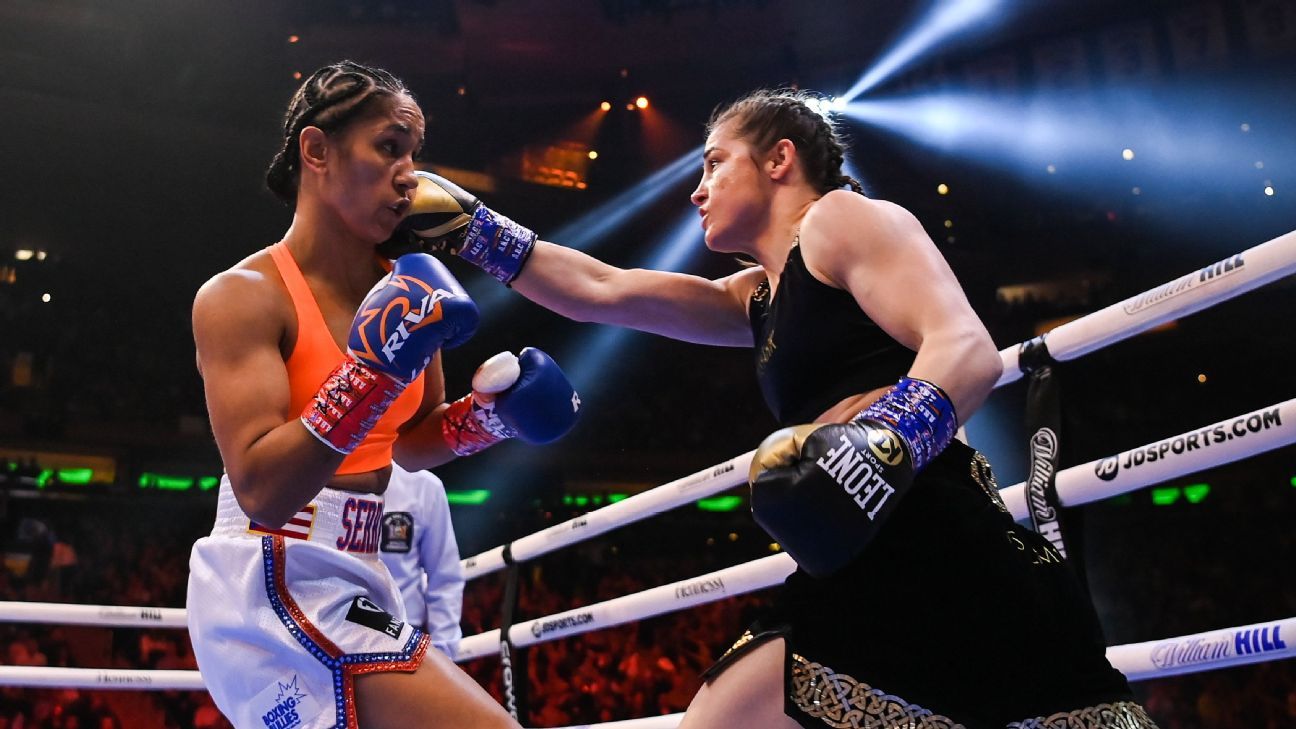 Two big events in two of the biggest boxing cities in the world take over the sport on Saturday.

Shakur Stevenson and Oscar Valdez will face off at the MGM Grand Garden Arena in Las Vegas to unify two junior lightweight titles. Stevenson (17-0, 9 KOs) is making the first defense of the WBO title he won in a 10th-round TKO victory over Jamel Herring in October. Valdez (30-0, 23 KOs) upset Miguel Berchelt in 2021 to win his WBC title, and he successfully defended the belt with a unanimous decision victory over Robson Conceicao in September.

At the iconic Madison Square Garden in New York, undisputed lightweight champion Katie Taylor will take on seven-division champ Amanda Serrano in what’s regarded as the biggest fight in women’s boxing history. Taylor (20-0, 6 KOs), an Olympic gold medalist in London 2012 and ESPN’s No. 1 pound-for-pound woman fighter in the world, unified all four major belts with a victory over Delfine Persoon in 2019. Taylor has made six successful defenses since then, including a one-sided decision victory over Firuza Sharipova in December.

Top Rank Boxing is now on ESPN and ESPN+. Subscribe to ESPN+ to get exclusive boxing events, weigh-ins and more.

Round 5: Serrano dominant. Just in the corner for almost half of it and punishing her. Taylor fought back to get it close to even but Serrano landed many more effective shots as Taylor tried to push into her. Serrano 10-9. Serrano 48-47.

Round 4: Taylor controlled this round. While Serrano was more aggressive, Taylor was able to respond and counter effectively while also landing enough to put pressure on Serrano. Taylor 10-9. 38-38.

Round 3: Another close round, but Serrano landed more strong shots, including a flurry of them in the last 30 seconds to take the round. Serrano 10-9. Serrano 29-28.

Round 2: Taylor showed more aggression this round and found ways to evade Serrano’s power. Closer round, but Taylor might have done enough of both offense and defense to pull it out. Taylor 10-9. 19-19.

Round 1: Amanda Serrano appeared to be the aggressor the entire round, including getting Katie Taylor in a corner for part of the round. Serrano, 10-9.

Ring announcer David Diamante just finished with the introductions and the fight is about to start.

Amanda Serrano, wearing the red, blue and white colors of the Puerto Rican flag, is walking to the ring at a packed Madison Square Garden. Jake Paul is walking with her.

Nico Ali Walsh, grandson of Muhammad Ali, knocks out Alejandro Ibarra in the final seconds of the first round.

Ali Walsh (5-0, 4 KOs) connected on an overhand right that ended the middleweight bout against Alejandro Ibarra with 10 seconds remaining in the opening round.

The 21-year-old Ali Walsh, who turned pro in August, was coming off a second-round TKO in January.

“This is just a testament to all the work I put in,” Ali Walsh said. “Stuff like this happens when you put the work in. I’m bringing my grandpa back to life, and that’s why mom gets so emotional because she’s seeing her dad again and hearing her dad’s name to me.”

It was just too much at the end. Liam Smith kept throwing and throwing and Jessie Vargas couldn’t do anything. For a few rounds it had been like this, and in the 10th round, Vargas’ corner had seen enough. Their fighter wasn’t going to win the fight.

And he was getting far too punished.

So they threw in the towel in Round 10, saving their fighter more brutality. That gave Smith, of Liverpool, England, his second straight knockout win, this time over Vargas in the co-main event. His supporters in the crowd erupted in fist pumps and were bouncing like they were at one of the clubs in this city’s Meatpacking District, with Smith egging them on from inside the ring.

Smith (31-3-1, 18 KO) was dominant throughout. It was an action-heavy fight until the last two rounds, when Vargas struggled to put together a counter defense.

By midfight, both boxers’ white trunks were colored with blood. While it was a back-and-forth tussle, Smith had continuously kept Vargas (29-4-1, 11 KO) on the ropes. While Vargas, from Las Vegas, did defend well from that position, Smith was clearly the aggressor, throwing a varied amounts of power shots and body shots on Vargas, whose face had been bloodied by the start of the seventh round.

As chants of “Ole, Ole, Ole” continued to course through Madison Square Garden, Smith pushed forward his continual attack. By the end of the seventh, Vargas was taking a lot — a lot — of punishment.

All fight long, Smith walked Vargas down. Every round was almost a carbon copy of the one before — Vargas trying to fight back, but Smith just continually pushing forward with technical proficiency and accuracy. By the ninth, Vargas was barely throwing punches back. He was protecting himself, but more likely he was trying to survive.

Franchon Crews-Dezurn started to get a little bit emotional as she raised her arms in a flexing pose. She knew what was coming next. One by one, the belts were placed on her arms, the honor given to a champion and even a bigger one to an undisputed champion.

In a unanimous decision — 99-91, 99-91, 97-93 — on Saturday night, she unified all four major super middleweight world titles by beating Elin Cederroos.

Crews-Dezurn, 34, of Norfolk, Virginia, who retained her WBC and WBO titles, said she didn’t know if she’d get this opportunity, either. When she did, she handled it with ease. From the start of the fight, Crews-Dezurn (8-1, 2 KO) went right at Cederroos, bloodying her nose and setting the tone for the entire fight. With a plethora of strong right hands, she kept Cederroos from having a chance at all.

Sweden’s Cederroos (8-1, 4 KO), 37, found more of a rhythm in the latter stages of the fight, including strong seventh and eighth rounds. It proved to not be enough, though, for her to hold on to her WBA and IBF titles. — Michael Rothstein

Troy Isley, who represented the U.S. in the Olympics last summer, improved to 5-0 on the Valdez-Stevenson undercard.

The middleweight prospect scored his third stoppage in the pros with an impressive body-punching display. A left hand to the midsection floored Anthony Hannah in Round 2 before a right hand to the body ended the fight with 27 seconds left in the frame.

In New York: Yafai stops Cartagena in Round 2

It didn’t last long. Two rounds, to be exact, before the corner of Miguel Cartagena stopped the scheduled 10-round flyweight bout against Galal Yafai.

Yafai had been fairly dominant throughout the first two rounds of the contest before Cartagena’s corner urged the referee to stop it.

The 29-year-old Yafai (2-0, 2 KO), from of Birmingham, England, has still not gone close to the distance in any fight. In his first pro bout in February, he had a TKO against Carlos Vado Bautista. On Saturday, he picked up his second win in even less time.

Cartagena (27-7-1, 8 KO), 29, from Philadelphia, had a two-fight win streak snapped. Before that, he had lost three straight contests. — Michael Rothstein

In Las Vegas: Abdullah Mason, of Cleveland, Ohio, moved to 2-0 with 2 KOs by defeating Argentina’s Luciano Ramos by first-round TKO. Ramos is now 1-3 in his career.