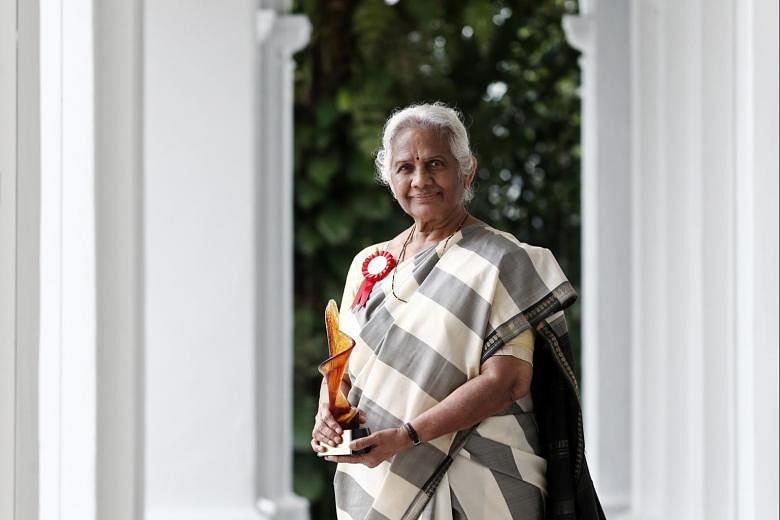 One of the first landmark works she produced with her husband was The Butterfly Lovers, inspired by the 1958 Chinese movie of that title. It combined Chinese costumes with Indian music and dance.

She formed friendships with ballet-trained Goh Lay Kuan and Malay dancer Som Said. The trio would visit each other’s homes in the 1950s and 1960s to learn each other’s dance techniques.

Composer Zubir Said, who composed the National Anthem, was the Bhaskars’ neighbour in Joo Chiat and a frequent collaborator in their work.

The pandemic did not stop her from creating new works. She also experimented with creating works for digital media. She was present for the launch for the Singapore International Festival of Arts last week, spry and alert, and happy to be commissioned for Ceremonial Enactments, one of the festival’s headline productions.

Members of the arts community expressed shock and grief at her passing. A spokesman for Bhaskar’s Art Academy said: “”We are all shocked with this sudden and unexpected loss. Her dedication to the arts till her final breath is reflective of her life journey.”

Dancer, choreographer and teacher Shantha Ratii, who is in her 60s, took her first dance steps as a five-year-old under Mrs Bhaskar’s tutelage. She said of Mrs Bhaskar: “She’s like a mother who holds the hands of a child who takes her first steps. Her work was her oxygen. I don’t think she even looked at it as work. She went about it with a smile and so much grace.”

Ms Kuo Jian Hong, whose parents Kuo Pao Kun and Mdm Goh were friends with Mrs Bhaskar for decades, said: “I cannot remember Mrs Bhaskar not being a part of my life, a part of Singapore’s arts community. She was a master who never stopped exploring with a child’s curiosity; a pioneer who walked side by side with the newbie; an artist who carried the often unbearable weight of sustaining with grace and dignity; the gentle auntie who always brought a smile to my face. Today, we lost a towering figure who has quietly led the charge for decades.”

Ivan Heng, 57, founder and artistic director of Wild Rice, said Mrs Bhaskar was in discussions with him to stage a festival tribute to Mr Bhaskar, who died in 2013 from a heart-related illness.

He paid tribute to her adventurous spirit: “She was constantly innovating and always so curious about what makes Singapore multicultural. She was Singaporean in her soul. And her inspiration and ideas, her life’s work, as a dancer, choreographer, teacher, was dedicated to exploring and expressing that soul.”

Ms Sharon Tan, 56, director of the National University of Singapore’s Centre for the Arts (CFA), said that Mrs Bhaskar had been an inspiration as the centre’s longest-serving tutor since 1977.