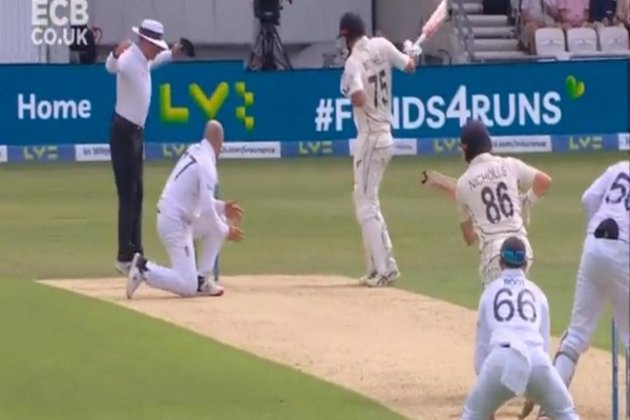 During the first day of the match, when he was batting at 19 in the 56th over of the match, a shot hit on spinner Jack Leach’s second delivery hit the bat of Daryl Mitchell, present at the non-striker hand. The ball hit Mitchell’s bat while he was trying to get away from the ball, but the ball found the middle of his bat and went straight to Alex Lees’s hands at the mid-off. Even the umpire Richard Kettleborough could not stop the ball from going towards mid-off as he tried to get away from the ball.

In this way, concluded a really unfortunate dismissal of Nicholls for 19 off 99, sinking New Zealand to 123/5. The entire English team was all smiles, but the dismissal was extremely shocking and unfortunate for the Kiwis, who were already struggling against English bowlers.

Later, Marylebone Cricket Club (MCC), took to social media to inform that the dismissal is completely within the laws of the sport.

“An unfortunate dismissal? Yes. But wholly within the Laws. Law 33.2.2.3 states it will be out if a fielder catches the ball after it has touched the wicket, an umpire, another fielder, a runner or the other batter. Read the Law: http://lords.org/caught,” tweeted MCC.

Choosing to bat first, New Zealand did not have a very good start as they kept losing wickets at regular intervals. Kane Williamson (31) and Devon Conway (26) made notable contributions for the Kiwis before Kiwis sunk to 123/5. Then, Mitchell and Blundell stitched an unbeaten 102-run stand to put their side in a better position.