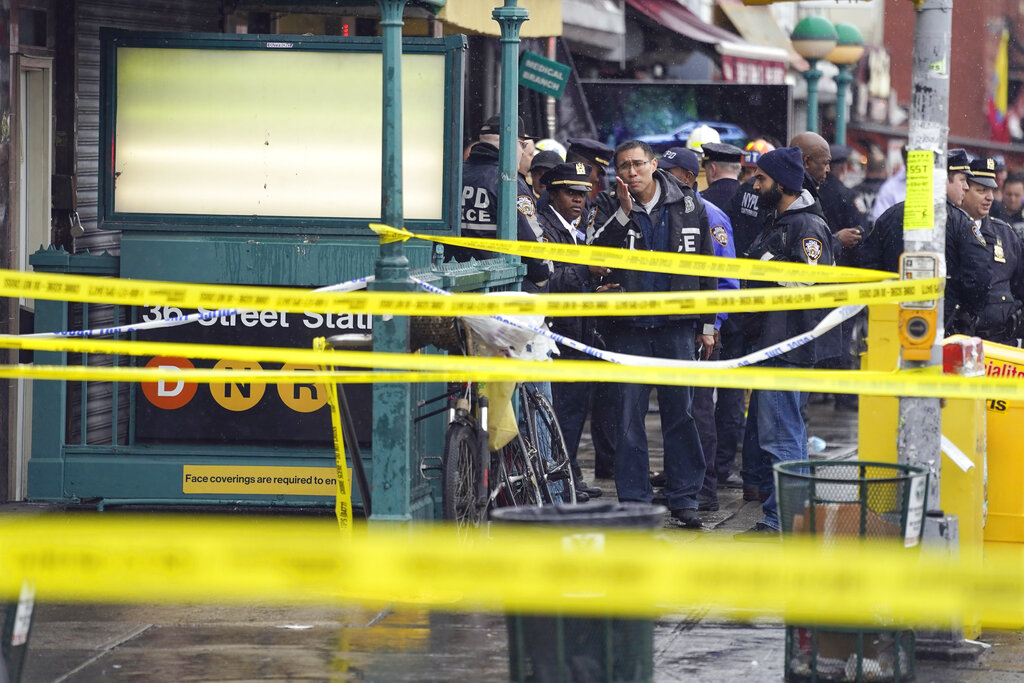 NEW YORK CITY (NEXSTAR) – Ten people were shot on Tuesday morning during an attack in a subway car in Brooklyn, where officials said they also found “several undetonated devices,” according to police and fire officials in New York City.

At a press conference on Tuesday, NYPD Commissioner Keechant Sewell said the suspect — who remains at large — was riding the N train at approximately 8:24 a.m. when he put on a gas mask and detonated a smoke canister. He opened fire as the train filled with smoke, hitting people both in the subway car and on the platform at the 36th Street subway station in the Brooklyn neighborhood of Sunset Park, according to Sewell.

The FDNY first got reports of smoke coming from the subway station at around 8:30 a.m. First responders arrived to find at least five people had been shot, but a representative who spoke with Nexstar’s WPIX said the number of shooting victims was likely higher. At a press conference following the attack, the FDNY confirmed 10 people were shot, and five were in critical but stable condition.

Six others were said to be injured, according FDNY Commissioner Laura Kavanaugh, but the extent of their injuries was not specified. Kavanaugh said some of the other victims may have suffered from “panic”-induced injuries or smoke inhalation.

The victims were being treated at local hospitals, including NYU Langone and Methodist, the FDNY told Nexstar. None of the injuries were believed to be life-threatening.

At Tuesday’s press conference, NYPD Commissioner Keechant Sewell confirmed the suspect had worn a gas mask and a green “construction-type vest” over a gray hooded sweatshirt. Sewell declined to say if the suspect was attempting to pass as an MTA or city employee.

The suspect is described as a Black male, approximately 5-feet, 5-inches, with a “heavy build,” Sewell said.

Police are currently asking the public for assistance or tips, “no matter how insignificant,” that may lead to the suspect’s identification and arrest, she said. Anyone with information is being urged to call Crime Stoppers at 1-800-577-TIPS.

The suspect’s motive remained unclear at the time of the press conference, Sewell said.

Police located a U-Haul van that was sought in connection with the attack Tuesday evening, the Associated Press reported. The van was found in Brooklyn, about four miles from where the shooting occurred, and was unoccupied.

The street where the van was parked was closed off and nearby buildings were being evacuated as a bomb squad investigated the vehicle.

The FDNY said Tuesday morning that “several undetonated devices” were found at the station, but the NYPD later wrote on Twitter that there none were active.

At the press conference, Sewell stated that there were “no known explosive devices” on the city’s trains. NYC Mayor Eric Adams, in a statement shared to his website, also said authorities had “not found any live explosive devices, but the suspect in today’s attack detonated smoke bombs to cause havoc.”

The incident is not currently being investigated as an act of terrorism, but Sewell said police are not ruling out the possibility.

Footage believed to be taken at the 36th Subway Station appeared to show panicked NYC commuters rushing to exit a train on Tuesday morning. In one video, which began circulating on social media shortly after the attack, passengers flee train cars that appeared to be filling with smoke or gas.

One person looked to be hobbling from the train on an injured foot, the video shows. The rider then layed down on the subway platform.

An MTA employee over the loudspeaker could also be heard instructing passengers to quickly board a different train, located across the platform.

NYC’s Department of Emergency Management warned the public to expect delays, disruptions and cancellations due to the investigation, especially on and D, N or R trains in either direction. Commuters are being told to avoid the area, which continues to be an active crime scene.


Breaking updates: The latest on the Brooklyn subway shooting

The mayor’s office is asking New Yorkers to avoid the station and the surrounding area during the city’s investigation.

“While we gather more information, we ask New Yorkers to stay away from this area for their safety and so that first responders can help those in need and investigate,” the mayor’s press secretary tweeted.

At Tuesday’s press conference, New York Gov. Kathy Hochul said she would devote the full resources of the state to fight “surging crime.”

“It has to end and it ends now,” she said. “We are sick and tired of reading headlines about crime, whether they’re mass shootings, or the loss of a teenage girl or a 13-year-old. It has to stop,”

The NYPD and FDNY said additional briefings would be held later on Tuesday.