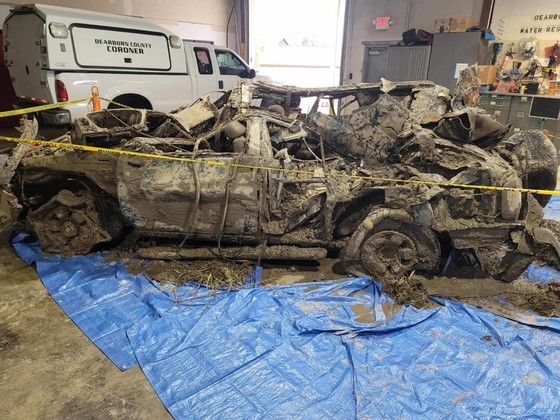 AURORA, Ind. (WANE) Authorities have positively identified the human remains found inside an SUV as those of a woman who left a note in 2002 saying she was going to drive into the Ohio River.

According to Indiana State Police, in April 2002, Stephanie Van Nguyen, 26, and her two children, Kristina, 4, and John, 3, disappeared. Nguyen was last known to be driving her 1997 Nissan Pathfinder. She had left a note indicating she was going to drive into the Ohio River, however, the SUV could not be found.

In 2021 police conducted a thorough search of the river using side sonar scan technology that led divers to locate a vehicle that matched the description of Nguyen’s Pathfinder. The registration plate on the vehicle confirmed the vehicle belonged to Nguyen.

Dive teams worked to bring the vehicle to the surface which was more than 50 feet down and 300 feet from the river bank.

After the vehicle was removed from the river, anthropologists from the University of Indianapolis assisted investigators in searching the vehicle for human remains. One bone, believed to be human, was recovered from the vehicle and sent to a laboratory for further investigation.

The testing, which was completed by the Ohio Bureau of Criminal Investigations Laboratory, confirmed that the bone belonged to Stephanie Van Nguyen.

Because no other remains were found, the two children will still be listed as missing persons cases unless more remains are found. The family could also file through the courts to have the children declared legally dead.

Once the weather improves, investigators will resume their search for human remains in the area where the SUV was found.