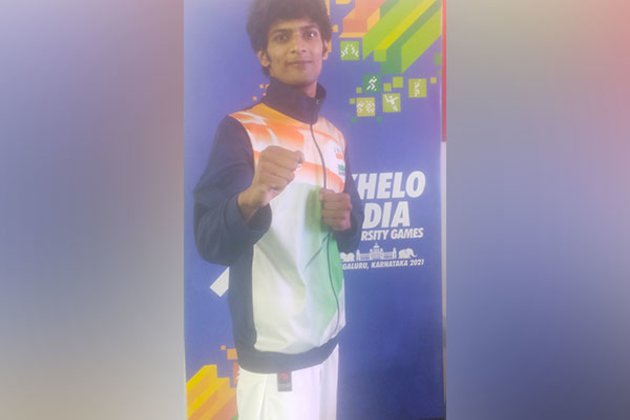 Bengaluru (Karnataka) [India], May 1 (ANI): World Number 60 and India Number one in Male Kumite (-67 kg category) Pranay Sharma was icing his knee as the karate athletes fought it out on the mat at the Khelo India University Games 2021.

Sharma, representing Rammanohar Lohia Avadh University, after setting up a final clash with Vaibhav Walia from Chandigarh University said, “I am feeling confident and positive about the final. I am feeling prepared and ready to fight.”Thailand Open Gold Medallist and USA Open Bronze Medallist Sharma has set his eyes on KIUG Gold, but he has even bigger dreams for himself, “My immediate goal after KIUG is to win a medal for my country at the Asian Games. I think I can win a medal for India and grow the game of karate even more in our country. The Asian Games is a top-level competition and nothing beats a medal there.”When asked about how he made his foray into karate, the Karate prodigy said, “My father was also a Karate player. He played at the National level and he has always motivated me and pushed me forward. Earlier I was known as his child and now because of my accomplishments, he is known as my father, so that’s a big accomplishment for me.”However, Sharma will face a tough challenge from Vaibhav Walia, who also exuded confidence, “I am feeling really good that I am in the Final, but I will try my best to win Gold. If I win the Gold then my parents will be the ones happier than me. They have helped me a lot and I am nothing without him. My father will be so happy because he will see me win a Gold on TV.”Walia would find himself in many fights around his house when he was a child. But now he has learned to control himself, “I was a bit of an aggressive child. I would get into a lot of fights. But, after I started training in Karate, I learned to control myself. because self-control is very important in our sport. Now I don’t get angry anymore and I have learned from karate that you have to control yourself.”Pranay Sharma and Vaibhav Walia will play out their mouth-watering clash in the -75kg Individual Kumite Final on Monday. (ANI)