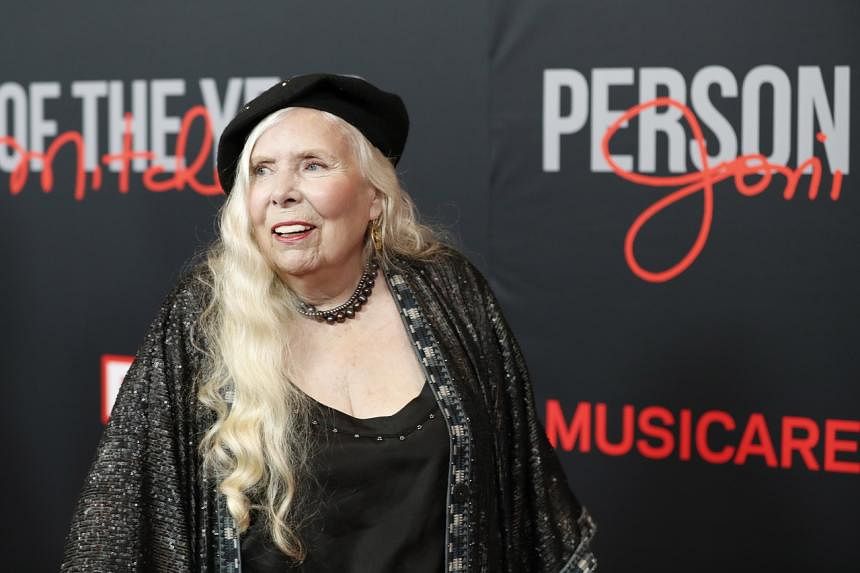 LAS VEGAS (AFP) – Music’s legends and hitmakers turned out on Friday (April 1) to honour Joni Mitchell – who performed on stage for the first time in several years – at a charity gala ahead of the Grammys that featured moving tributes and glassy eyes.

“It’s been quite a year,” the singer-songwriter known for her distinct contralto and open-tuned guitar told journalists on the red carpet.

In December, she was among the inductees at the Kennedy Centre Honours gala, one of America’s most prestigious arts awards.

The evening marked a rare public appearance for the trailblazing Mitchell, who in 2015 suffered a brain aneurysm that left her temporarily unable to speak, the aftermath of which has involved extensive physical therapy.

But on Friday, she was glowing, telling reporters she has been having artistic ideas even as she continues to focus on improving her health.

The influential artiste who inspired everyone from singers Neil Diamond to Prince is perhaps best known for the intensely personal 1971 album Blue, a deep dive into emotional heartache.

Last summer, Blue charted at No.1 on iTunes as it hit its 50th anniversary – outperforming even pop sensation Olivia Rodrigo’s Sour.

Voicing her own astonishment over the milestone, Mitchell explained her album’s enduring popularity and recent resurgence: “Maybe people want to get a little bit deeper.”

And asked by reporters how she was feeling health-wise, she said “pretty good”, adding she had been “making improvements”.

“She bares her soul, but she does it in such a poetic way,” Hancock, 81, told AFP on the red carpet, in the hours before he delivered a performance of Mitchell’s song Hejira onstage.