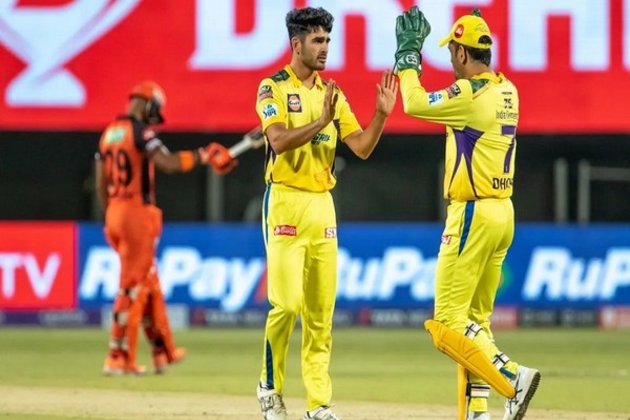 Pune (Maharashtra) [India], May 2 (ANI): Chennai Super Kings pacer Mukesh Choudhary after the match revealed what skipper MS Dhoni told him during the last over against SunRisers Hyderabad on Sunday.

Notably, Mukesh Choudhary dropped Abhishek Sharma in the powerplay. He, however, made amends with the ball by picking up a four-fer and more importantly his wickets right at the edge of powerplay brought CSK back into the game.

SRH got off to a blazing start, smacking 46 off the first 4 overs but wickets on successive deliveries (Abhishek Sharma and Rahul Tripathi) in the 6th over hindered their momentum.

Mukesh Choudhary in the post-match presentation talking about that 6th over said: “A wicket hadn’t fallen yet, so I had to take my chances, I knew I dropped a catch but I had to take a wicket and thankfully that happened.”Dwayne Bravo didn’t play the match against SRH, on which the pacer said: “There was more responsibility in the powerplay without Bravo because he has so much experience, he keeps advising us. Yesterday, he told me I have to take more responsibility, the team environment is always very supportive.”SRH needed 38 runs in the last over of the match. Shedding light on the 20th over, Mukesh revealed what MSD told him during those deliveries: “MS Dhoni didn’t tell me anything special about that over, he just told me to bowl stump to stump and not try anything fancy.”CSK were back to winning ways in the Indian Premier League (IPL) 2022 after registering a victory against SRH by 13 runs at the Maharashtra Cricket Association Stadium in Pune.

Chennai Super Kings successfully defended the total and won the contest against Sunrisers Hyderabad. After SRH won the toss and decided to bowl first, the openers of CSK got off to a flying start and continued their momentum till the end.

The opening duo put up the highest partnership of this season of 182 off 107 and Ruturaj got dismissed for 99 runs from 57 deliveries. Devon Conway was unbeaten till the end and scored 85 off 55 balls.

With the target being 203, the openers Abhishek Sharma and Kane Williamson provided a nice start to SRH after which they got out for 39 and 47 runs respectively. Pooran (64 off 33) in the end played some crackling shots but he did not get any support from the other end and SRH lost the match by 13 runs. (ANI)