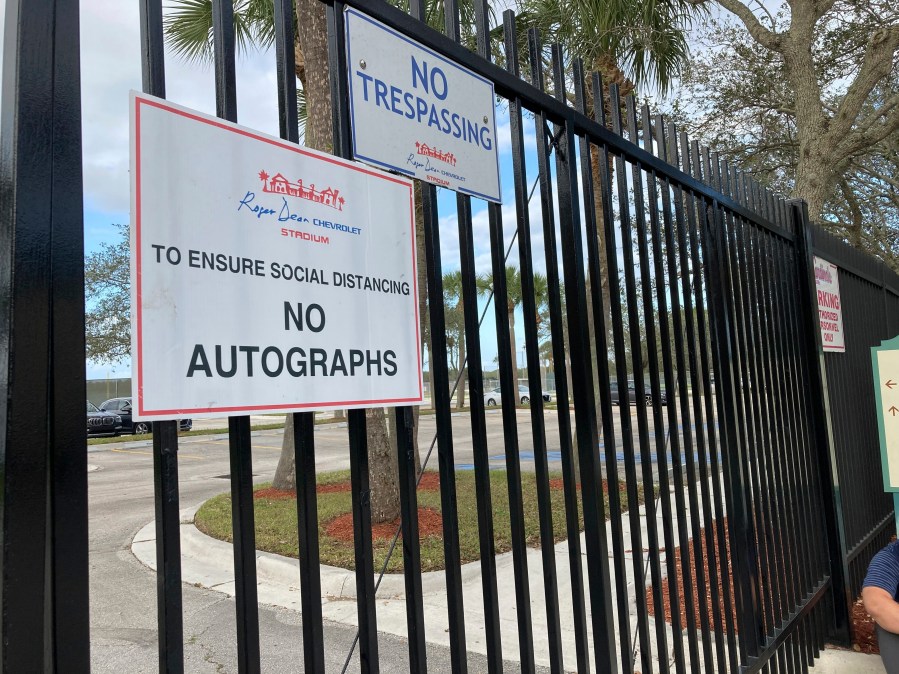 JUPITER, Fla. (AP) — Baseball negotiations resumed with new intensity Monday in an effort to salvage Opening Day, and owners made a pair of slight moves toward locked-out players but put off big-ticket bargaining issues until later.

With a week or perhaps a little more time left to preserve openers on March 31, union head Tony Clark attended negotiations for the first time since the work stoppage began on Dec. 2.

New York Mets star Max Scherzer and Francisco Lindor were among 10 players who were at a pair of sessions during a five-hour span. In contrast to the union leaders Tom Glavine and David Cone during the 1994-95 strike, none of these players spoke publicly.

MLB increased its offer of a bonus pool for pre-arbitration players by $5 million to $20 million that would go to 30 top players, a fraction of the $115 million for 150 players the union has asked for.

Clubs also increased their proposal for a lottery for the amateur draft from the top three picks to the top four. Players have asked for the top eight.

Teams also dropped their proposal to have the flexibility to decrease domestic minor league contracts along with a plan to limit optional assignments to five per player each season. The union opposed the minor league proposal and asked for a limit of four options.

The previous time the sides met, they talked for only 15 minutes on Thursday. This time, the parties described the discussions as candid and productive, but the union interpreted the slight moves as disappointing,

MLB canceled spring training games from Feb. 26 through March 4 and has told the union a deal is needed by Feb. 28 for opening day to come off as scheduled. Players have not said whether they agree that is a deadline, and past practice indicates a deal could be reached in early March that would allow sufficient training time.

The session was just the seventh on core economics during the lockout, and talks are to continue at 1 p.m. Tuesday, when the second-longest stoppage in baseball history will be in its 83rd day. Until now the sides have bargained on consecutive days just once during the lockout.

Players are angry that payrolls last year dropped to their lowest level since 2015, and they want new mechanisms in the agreement to spur competition — and spending.

Teams have told the union they will not increase salary arbitration eligibility, will not decrease revenue sharing and will not add new methods for players to accrue service time, which players said are needed to prevent teams from holding players back to delay free agency.

Clubs also say they won’t make new proposals on luxury tax thresholds and rates until the late stages of talks.

The Cardinals’ Paul Goldschmidt, the Yankees’ Jameson Taillon, the Reds’ Sonny Gray, the Royals’ Whit Merrifield, the Twins’ Taylor Rogers, the Brewers’ Brent Suter and the Mets’ Brandon Nimmo also were among the players at bargaining in Roger Dean Stadium, the vacant spring training home of St. Louis and the Miami Marlins.

Clark and the players conferred with Bruce Meyer, the union’s chief negotiator, in the right field parking lot before entering the ballpark.

Colorado Rockies CEO Dick Monfort, chairman of the owners’ labor policy committee, was on hand along with San Diego Padres vice chairman Ron Fowler, the immediate past chair of the committee. Baseball Commissioner Rob Manfred was not present, and the MLB delegation was headed by Deputy Commissioner Dan Halem, the clubs’ lead negotiator.

Players spoke directly to owners during the session. They had for the most part not attended bargaining in large numbers in person, partly because of the pandemic. They previously joined in Denver last August and in Irving, Texas, just before the expiration of the five-year labor contract.

Until now, all talks during the lockout had been in New York at the offices of MLB and the players’ association. The union asked they be shifted to Florida so players could attend without disrupting their pre-spring training workouts.

Big league spring training failed to start on time last Wednesday due to baseball’s ninth work stoppage, its first since 1995.