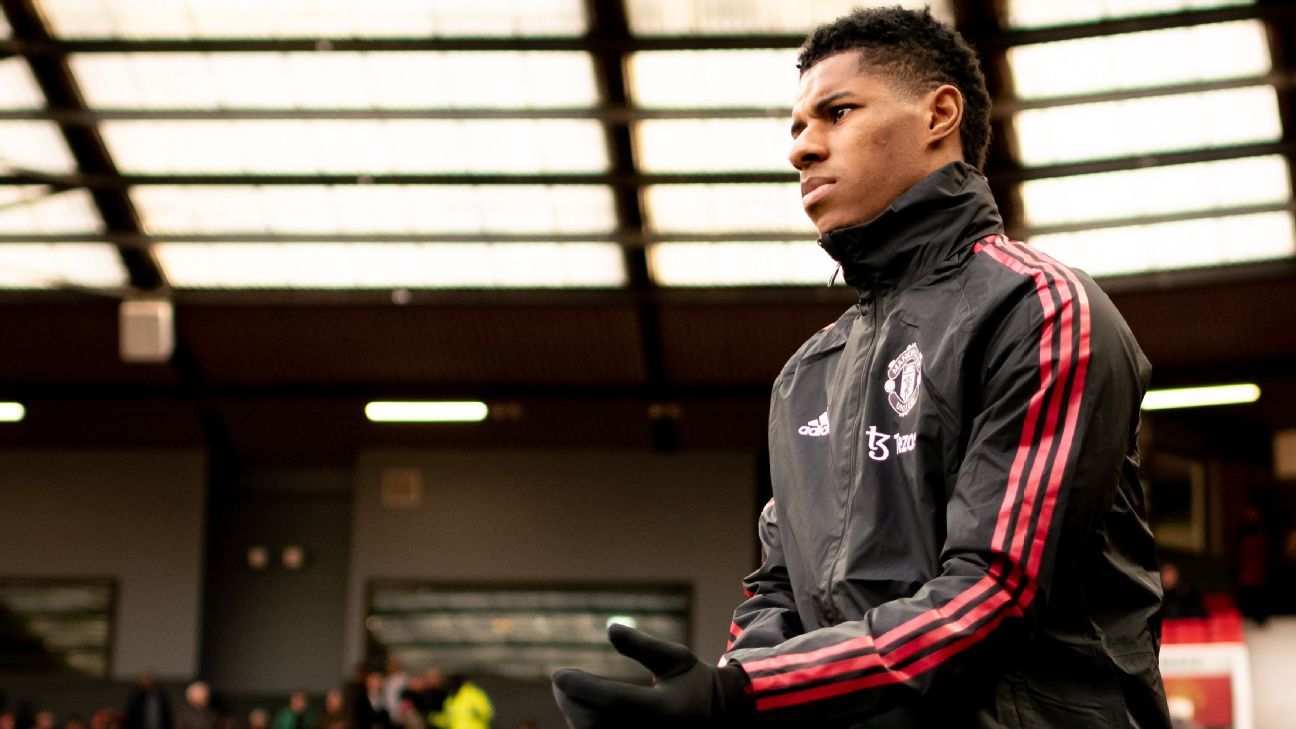 If Marcus Rashford ever needed his deteriorating situation with Manchester United and England to be put into sharp focus, he surely got that in the space of 24 hours this weekend.

On Friday, the 24-year-old saw England’s route to World Cup glory in Qatar mapped out following the draw which gave Gareth Southgate’s team a favourable path to the latter stages of the competition. Having been overlooked for England’s squad for the recent friendlies against Switzerland and Ivory Coast, Rashford will know he now has to fight his way back into Southgate’s plans before the World Cup starts in November, but having been a central figure in the team which reached the semifinals at Russia 2018, he will undoubtedly picture himself being back in the fold before the squad fly out to Qatar.

– Weekend review: What has Rangnick achieved at United?
– Stream ESPN FC Daily on ESPN+ (U.S. only)
– Don’t have ESPN? Get instant access

But by Saturday evening, Qatar would have been the furthest thing from Rashford’s mind after his faltering United career hit another low point with interim manager Ralf Rangnick naming him among the substitutes against Leicester City and choosing instead to start with a team that did not include a single striker. With Cristiano Ronaldo ruled out due to illness and Edinson Cavani declaring himself unfit, Rangnick selected Bruno Fernandes as a false No. 9 and had Rashford on the bench for a game that United really needed to win to keep alive their hopes of a top-four finish.

United could only draw 1-1 at Old Trafford and Rashford, a 55th-minute substitute for midfielder Scott McTominay, was unable to make a positive impact after being sent on by Rangnick to help push the team to victory. During his 35 minutes on the pitch, Rashford touched the ball just 14 times and failed to register a shot, assist or tackle. It was a similar situation in the Manchester derby on March 6, with Rashford only coming off the bench after 64 minutes despite being the only recognised striker in the squad as United lost 4-1 at the Etihad, but at least that was an away match against the league leaders and defending champions.

Many will argue that Rashford’s form this season — he has scored just four goals in 20 Premier League appearances — does not merit a starting spot in the United team and that, as a consequence, he should be nowhere the England squad. It is difficult to argue against that, especially as some of Rashford’s recent performances have been so ineffective that sources have told ESPN that Rangnick and his staff believe he becomes a “ghost” in games by disappearing from the action.

But his failure to make the starting XI against Leicester was significant in that he was the only fit striker and had spent two weeks preparing for the game having not been away on international duty. Rashford should have been a guaranteed starter in the circumstances, so only making it on to the bench was a clear sign from Rangnick that he has little faith in a player who, not so long ago, was regarded as being the golden boy for club and country.

Rashford’s decline is a complex story and neither the player nor United are blameless for his failure to be the player he should be right now. United, under a succession of managers, used him far too often, despite the obvious concerns of physical burnout in younger players. In five full seasons, between 2016-17 and 2020-21, Rashford made an average of 50.6 appearances a season, with international involvement at Euro 2016, the 2018 World Cup and Euro 2020 on top of that.

In January 2020, Rashford was ruled out for the rest of the season with a stress fracture of his back, only returning in June after the COVID-19 pandemic halted the campaign. Last season was his busiest yet, with 57 games for United, and it ended with Rashford undergoing shoulder surgery after the European Championship to correct an injury that he had continued playing with for months. He returned to action in October, without having a preseason campaign to recover his fitness, and has since made just 27 appearances in all competitions.

On top of Rashford’s workload, sources have told ESPN that the United players have long been unhappy with the lack of top-class coaching at the club and the failure to improve players can be seen in the unfulfilled potential of the likes of Anthony Martial, Paul Pogba and Rashford.

United have let Rashford down by over-working him and not providing the elite coaches to make him a better player, but sources have also said that the club have, over the past 12 months, attempted to persuade Rashford to reduce his off-field work for good causes in order to focus more on regaining his best form, but so far, he has chosen to maintain his twin-track approach to commitments on and off the field.

So where does he go from here? At 24, Rashford should be approaching the peak years of his career. He has pace, a proven goal-scoring record and the ability to play anywhere across the front three — qualities which could make him a star of the World Cup later this year and the leading light in (another) new era under a new coach at United.

Sources have told ESPN that United want him to sign a new contract to replace his present deal, which runs until June 2024 if the club trigger the option of a further 12 months next year, but Rashford may yet decide that United aren’t delivering for him and the club’s next full-time manager might regard him as a problem he can do without.

The one ray of light on the horizon is that a new boss offers Rashford the chance to press the reset button in time to not only re-ignite his United career, but also regain his England place ahead of the World Cup. Something needs to change for Rashford, though. His miserable weekend made that clearer than ever.