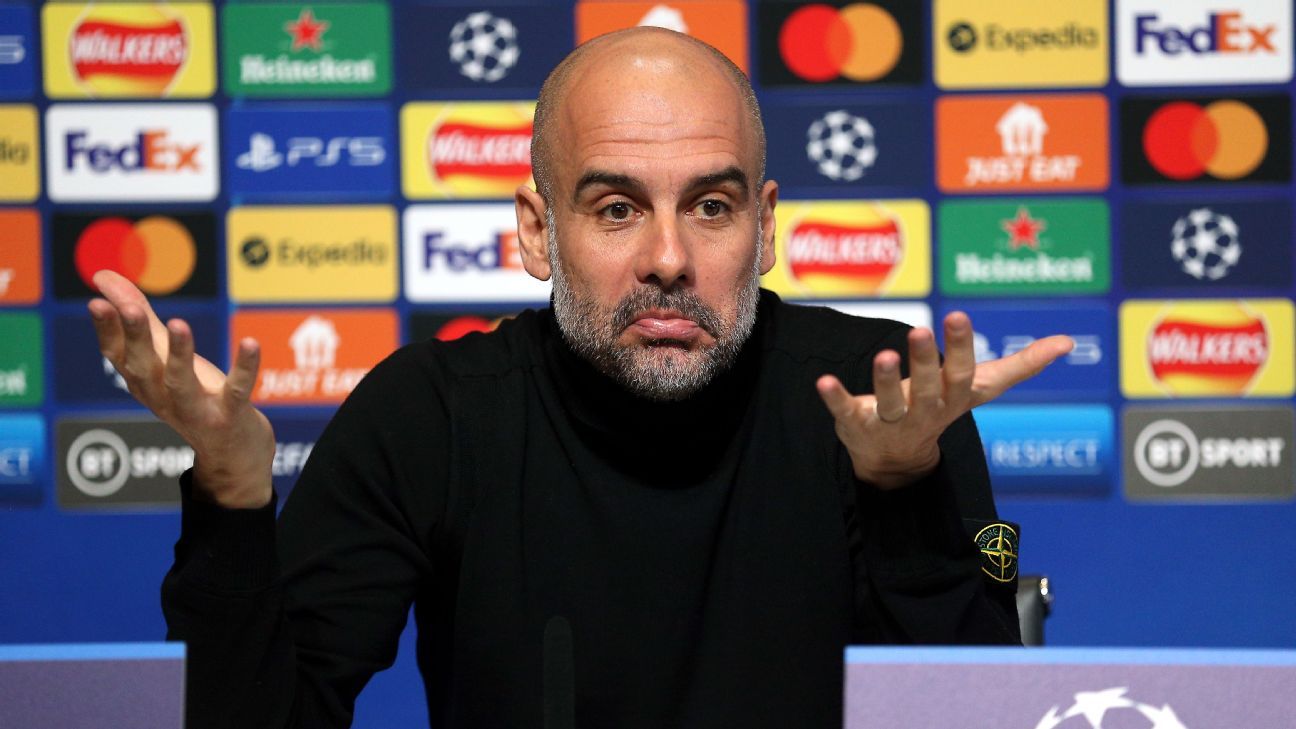 Pep Guardiola has laughed off his reputation as an “over-thinker” at the business end of the Champions League and joked that Manchester City could field 12 players against Atletico Madrid in their quarterfinal first leg on Tuesday.

Guardiola has been criticised for his tactics in important Champions League games in the past, including his decision to play against Chelsea in last season’s final without a defensive midfielder and play with a three-man defence in the shock 3-1 defeat to Lyon in the 2020 quarterfinals.

But the City boss mocked the suggestion he could do the same when Atletico visit the Etihad Stadium by saying supporters are set to see some “incredible tactics.”

“In the Champions League, always I overthink, create new tactics and new ideas and tomorrow you will a see one,” Guardiola said at a news conference on Monday.

“I overthink a lot. It’s absolutely [fair], that’s why I’ve had very good results in the Champions League. It would be boring, my job, if all the time I had to win the same way. Opponents have different ways to play. If people think I play the same against Atletico and Liverpool, I don’t like [that].

“The movements of Liverpool are completely different than Atletico Madrid especially because every player is different, every player has a mother and father with different personalities. I have to adapt.

“That’s why I love to overthink with stupid tactics, and if I don’t win I look stupid. Tonight [Monday] I will take inspiration and do incredible tactics tomorrow. We’ll play with 12 tomorrow.”

Atletico booked their place in the round of 16 with a 2-1 aggregate victory over Manchester United in the last round. Since drawing 1-1 with United in Spain at the end of February, Diego Simeone’s team have won six straight games — a run which has seen them only concede three goals.

It plays into the perceived view that Simeone — who beat Guardiola’s Bayern Munich in the semifinal in 2016 — is a defensive coach but Guardiola has dismissed the narrative that the tie will pit an attacking team against a cautious one.

“I’m not going to talk one second about these stupid debates,” Guardiola added. “If we win, we’ll be right and if they win, they’ll be right.

“They are more offensive than people think. They don’t want to take a risk in the build up but they have quality. I’m not going to spend one second on this stupid debate.”

Guardiola’s Atletico counterpart was similarly complimentary of City and their manager.

“What I like most about teams like City is the effort they make to win the ball back, to get an attack started,” Atletico boss Diego Simeone said at his team’s news conference.

“It’s great to watch. He evolves constantly. What I like is seeing [Raheem] Sterling, [Kevin] De Bruyne, players of that quality running and pressing, being active, they never give up on a ball. Adding effort to talent, that’s what every coach wants.”

While City may start the game as favorites, Simeone disputes that there is more pressure on the Premier League leaders.

“We all have pressure,” he said. “I don’t know if that’s the word, I’d say responsibility.

“City have extraordinary players, maybe better players than us, but they’re two games. City and Bayern might go in ahead, but that doesn’t mean anything. Last season Chelsea ended up champions and nobody expected that.”

The game kicks off a hectic run for City, who face Atletico twice and Liverpool twice in the space of 11 days. Guardiola’s team play Liverpool at the Etihad on Sunday in a crucial Premier League clash before facing them again in the FA Cup semifinal at Wembley on April 16, three days after the second leg against Atletico in Spain.

“It’s a good sign, it means that we come to the last two months of the season and we are there to fight for titles,” Bernardo Silva said.

“It would be a bad sign if we just had easy fixtures and games that didn’t matter at all. It’s good to be here, it’s good to be able to fight for all of them and we’re going to try it.

Alex Kirkland contributed to this report.