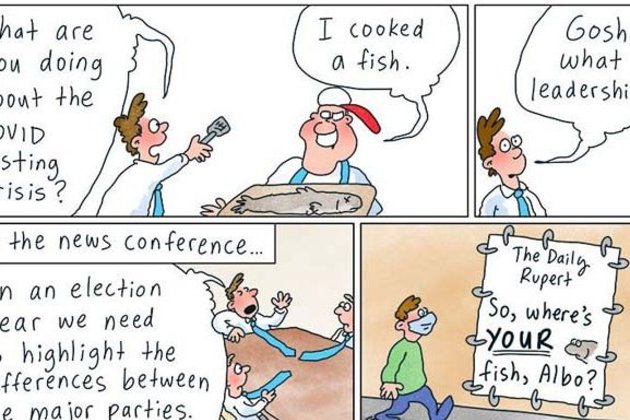 THERE ARE TWO WAYS to deal with crises like the COVID-19 pandemic: the Liberal Party’s “let it rip” approach, or Labor’s “let’s manage this” strategy.

Unfortunately, Australians were never given the benefit of having a public debate about which strategy is superior because the vast majority of the media ideologically framed the Liberals’ “let it rip” narrative as the sought after goal of “freedom”, while villainising Labor’s management strategy as the work of heartless dictators.

While most Australians spent the first week of 2022 anxiously worrying about ill family, suffering COVID-19 themselves, waiting in testing queues, searching in vain for Rapid Antigen Tests, isolating to avoid catching the virus or fretting about what the rest of the year would look like, Prime Minister Scott Morrison was slumped casually in a commentator’s chair at a test cricket match.

The Federal Government’s pandemic strategy has been a series of mistakes that could have easily been prevented.

“This is Australia living with the virus,” he said cheerfully, “look at out there and Australians taking wickets in the virus”.

It is apt that Morrison used a sporting setting to cheer for his “live with the virus” strategy, because throughout the pandemic, Morrison has been the chief cheerleader for this approach.

Liberal politicians don’t tell this “let it rip” story by accident. Liberals like Scott Morrison, former NSW Premier Gladys Berejiklian and, to a more extreme extent, current NSW Premier Dominic Perrottet, share the grand narrative which argues government should be “small” and have as little influence on people’s lives as possible. Instead of relying on collective management of the virus, Liberals have argued each individual should take “personal responsibility” for their health.

This perspective translates to a “hands off” or laissez-faire ideological approach to dealing with the COVID pandemic. It is premised on the neoliberal assumption that the economy is always better off when there are no government restrictions placed on it – in this case, health restrictions like border closures, density limits, masks, check-in codes and lockdowns.

The alternative perspective promoted by left-wing politicians like those from the Labor Party is that the Government has a responsibility to manage society and the economy for the collective benefit. Important to this grand narrative is the argument that economic health relies on a healthy society.

We are seeing in real time that a society “ripped” by the COVID pandemic is too sick and anxious to work and spend, so the economy is suffering a health crisis just as badly as society is.

Government’s COVID Christmas plan was capitalism at its worst

The Federal Government’s plan to get people back out and spending over Christmas has worsened the COVID-19 crisis.

As early as April 2020, Sharri Markson in the Daily Telegraph described duelling political perspectives about how to manage the pandemic, quoting a senior government source explaining:

Markson was not only describing here the alternative ways of dealing with the pandemic, but opposing political ideologies of left-wing versus right-wing politicians, ideologies which underpin all their political actions and ideas.

So, how were these opposing political ideas about the pandemic presented to audiences?

A healthy news media would accept that there are different ideological perspectives and would present these opposing ideas to the public – while scrutinising and interrogating them – to help the public decide which views they support. The health of democracy depends on journalists presenting different political ideas, like how to manage a pandemic, in a balanced and objective way.

The opposite of this balanced representation is bias and that’s what Australians were served up by journalists throughout the pandemic.

Although not every journalist subscribed to the biased “let it rip” narrative, the vast majority did. This included not only the outlets we expect to be biased, like Murdoch and Nine, but also at times the ABC and, on rare occasions, even The Guardian.

Each contributed to the biased “let it rip” story by framing health restrictions as the villain of the pandemic and those offering freedom as “heroes”.

Morrison and Perrottet turn their backs on Australia’s COVID crisis

Scott Morrison and Dominic Perrottet have shown a reckless disregard for the wellbeing of Australians in their questionable COVID strategy.

From the “Dictator Dan” narrative promoted by the rabidly partisan Herald Sun, to ABC 7.30‘s endless reports of business owners’ opposition to lockdowns, or families separated by border closures, The Age‘s editorialising against health restrictions and the constant, toxic comparison between “Gold Standard NSW Government” versus supposably incompetent Victorian Government, the Australian news media have served up a one-sided story of the pandemic. This has advantaged the politicians advocating for the simplistic notion of “freedom” and disadvantaged those urging for tighter restrictions.

What this biased narrative missed is any scrutiny of what “living with COVID” would really be like. While journalists were busily telling their audiences that health restrictions were the enemy, experts’ pleas to tread carefully with opening up plans were lost in the noise.

Also lost was any scrutiny of Australia’s preparedness to “let it rip”. When you’re campaigning against health restrictions, you’re hardly in the position to objectively report what life will be like without them.

Journalists now seem quite surprised and shocked at how quickly Australia is falling apart under the strain of the “let it rip” approach. Coverage of economic chaos, overwhelmed health systems and even their own experiences of catching COVID-19 or caring for loved ones sits in stark juxtaposition to coverage celebrating borders opening and health restrictions being rolled back.

The pandemic has exposed huge weaknesses in Australian governance, health systems, economic fragility, worker insecurity and also the quality of Australian media reporting. This crisis is journalists’ opportunity to learn from their mistakes and to recognise how their judgements can either consciously or unconsciously perpetuate ideological narratives that advantage some political ideas ahead of others.

Will they look in Scott’s Morrison’s rear-view mirror and self-reflect? The Liberal Party is hardly going to scrutinise its own ideological mess, but surely journalists have a responsibility to do so. I don’t have high hopes.