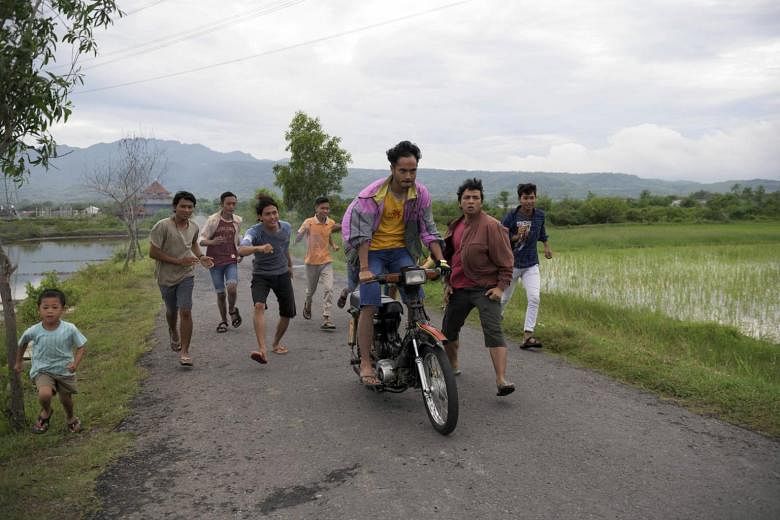 So, when he set about adapting novelist Eka Kurniawan’s 2014 book Vengeance Is Mine, All Others Pay Cash, its cynical humour and nods to 1980s pulp cinema held great appeal for him.

“He and I grew up in the same era – the 1980s,” says Edwin, who goes by one name, while speaking to The Straits Times over the telephone from his home base in Jakarta.

“We have these experiences in common – Eka and I loved the same comic books, and the action and horror movies that existed then. They were popular, but also silly,” says the 43-year-old.

That silliness, now translated into a movie with the same title as the novel, is now showing at The Projector. At the 2021 Locarno Film Festival, the action comedy won the top prize of the Golden Leopard.

The story begins with Ajo, played by Marthino Lio. Living in a rural part of the country during the 1980s, a period dominated by oligarchs with ties to the military, there is not much for Ajo to do but pick fights and take part in dangerous motorcycle races.

The troublemaker becomes a vigilante of sorts, but during a revenge mission against a local tyrant, he has to fight a formidable female bodyguard, Iteung, played by Ladya Cheryl. They impress each other with their fighting skills and soon fall in love.

Ajo, who previously threw himself into fights with suicidal zeal, now has a reason to live, but cannot bring himself to tell her his humiliating secret: He is impotent.

In the film, Ajo’s shame over his condition drives his journey. Other male characters, too, are pushed by their need to maintain a masculine image. It drives an absurd cycle of violence, with men seeking to settle scores even when so much time has passed that no one can fully remember the original quarrel.

“Back then, those men couldn’t express themselves. They could not show sensitivity. What they can show is their urge to punish, to kill. It’s what happens in a macho culture, not just in Indonesia, but everywhere,” says Edwin. “It still happens today. We pass it from generation to generation.”

The combative, destructive Ajo might not be a likeable hero, but he is not the villain of the story. At certain points, military men appear. Citizens live in fear of these men and speak in whispers about the power they wield over life and death.

During the 1980s, the purges of the 1960s were still fresh in the minds of Indonesians.