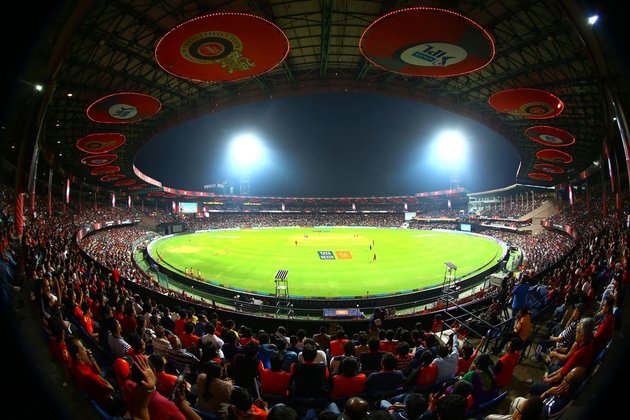 The M Chinnaswamy Stadium in Bengaluru has been thrown open to 100% crowd capacity for the second India-Sri Lanka Test, which will be played under lights, starting Saturday. This is a change from the earlier approved 50% capacity. The decision comes following approval from the state government to the Karnataka State Cricket Association (KSCA).

ESPNcricinfo understands an increased demand for tickets led to the association seeking government’s approval. Nearly 10,000 tickets thrown open to the general public have been sold out for the first two days, according to KSCA treasurer Vinay Mrithyunjaya.

The KSCA has also opened additional tickets from Friday to cope with the surge in demand, following their decision to throw open the entire stadium to spectators.

“Considering the high volume of response and since there are no further restrictions for spectators, KSCA will be opening up sale of tickets for full capacity of the stadium,” stated an official release from the association.

Bengaluru is hosting a Test for the first time since Afghanistan played their inaugural game in the city in June 2018. It last hosted an international fixture in January 2020, when Australia toured for a short ODI series, with Rohit Sharma’s century sealing a series win for India.

Overall, this is India’s third day-night pink-ball Test at home, following matches in Kolkata against Bangladesh (November 2019) and Ahmedabad against England (February 2021). India won both those Tests inside three days.

The city was initially slated to host the first Test, Virat Kohli’s 100th, but was later slotted in to host the tour ender as it would help facilitate a direct flight back home to Colombo for the visiting Sri Lankans.

Shashank Kishore is a senior sub-editor at ESPNcricinfo