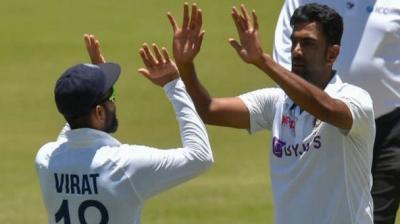 Kohli on Saturday stepped down as India’s Test captain after leading the side for seven years.

Ashwin said Kohli’s legacy as a captain will stand for the kind of benchmarks he has set. The veteran spinner also mentioned his biggest “takeaway” from Kohli’s stint as captain.

“Cricket captains will always be spoken about with respect to their records and the kind of triumphs they managed, but your legacy as a captain will stand for the kind of benchmarks you have set. There will be people who will talk about wins in Australia, England , Sl etc etc,” Ashwin said in a tweet.

“Wins are just a result and the seeds are always sown well before the harvest! The seeds you managed to sow is the kind of standard you set for yourself and hence set the expectations straight with the rest of us.

“Well done @imVkohli on the headache you have left behind for your successor and that’s my biggest takeaway from your stint as captain. ‘We must leave a place at such an altitude that the future can only take it higher from there on,” he added.

Last year, Kohli had stepped down as the T20I captain and then he was removed as the ODI leader as the selectors wanted one captain for the white-ball format.

Kohli’s biggest win in the longest format came during 2018-19 as India won its first Test series Down Under. Under his captaincy, India also reached the finals of the World Test Championship (WTC).