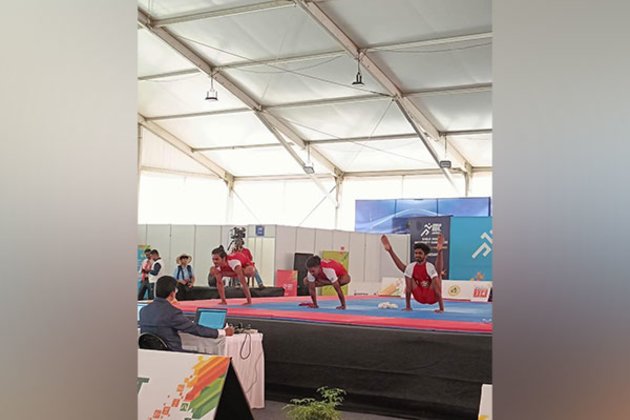 Bengaluru (Karnataka) [India], April 30 (ANI): Yoga has always been an integral part of India’s heritage and culture and therefore it was only fitting to bring Yogasana as a competitive sport in the Khelo India University Games 2021. However, the sport has been played for several years without catching the eye of the majority of the public in India.

Savitribai Phule Pune University’s Nitin Tanaji Pawale feels that KIUG will increase the popularity of the sport. “The popularity of Yogasana is increasing slowly with the sport being organized in Khelo India University Games, National School Games and some international events as well. And practising Yoga is really difficult. We have to control our movements and get into a stable position. And we have to practice every day. Even if we take one day off, our bodies will become stiff,” he said.

Pawale also added that he would like to represent India in the Asian Games if Yogasana is organized in the competition in the future, “Yogasana could be included in the Asian Games in the future. If it is included, then I’ll definitely represent India. But for now, the Khelo India University Games and All India Inter-University competitions are some of the biggest tournaments for me.”Speaking about how the sport of Yogasana is played, Sanjay Malpani – Competition Manager, Khelo India University Games 2021 and Vice President, National Yogasana Sports Federation said, “There are 8 teams in the competition. They have been given a curriculum for the championship. The athletes have to perform five compulsory asanas, four optional asanas out of a list of nine optional asanas and a Surya Namaskar in the first round (semifinals). And the best five teams qualify for the finals. In the finals, the teams will have to perform five compulsory asanas, a Surya Namaskar and four optional asanas, but they cannot repeat the optional asanas they performed in the first round.”Malpani also explained the scoring system of the sport, “The teams have to perform 10 activities in total and there’s a maximum of 10 points for each performance. The athletes pick up points on the basis of the steps they take to reach the final posture and how they return from that posture. And the time taken by the athlete to hold a particular asana is very important. They need to hold the compulsory asanas for one minute and the optional asanas for 30 seconds since the optional asanas are a bit more difficult. The athletes are also judged on the perfection of the final posture. They are given points for their overall appearance – how they are walking, how they are confident, their costume and so on. They are also judged on their stability when they perform the asanas.”Swami Vivekananda Yoga Anusandhana Samsthana’s Aditya Prakash Jangam also spoke about the platform provided by KIUG. “A lot of athletes have been practising yoga for the last 10-15 years but they have not had a platform to showcase their talent to the entire country. There are a lot of Yogasana competitions that are held in India, but it’s not broadcast to the whole nation like the Khelo India University Games 2021.”When asked about the importance of the International Day of Yoga, which is coming up on June 21, the athlete said, “International Day of Yoga is a great initiative by our Prime Minister as the entire world comes together and gains knowledge about Yoga. The idea of Yoga has been spread across the world because of the initiative. The concept of the International Day of Yoga is a really good one.”Jangam also expressed thoughts about how he attained an interest in Yogasana. “I started playing the sport when I was in the fourth standard. I have been practising Yogasana for 11 years. Our coach, who was the Assistant English teacher in my school, taught a batch of students asanas for their yoga performance at functions, which were organized in our school. Looking at their acrobatic skills, I attained an interest in Yoga and joined the batch that our coach was teaching at the time.”Aditya Prakash Jangam and Tanaji Pawale will be in action in the Yogasana finals at the Jain University Campus on Sunday. Swami Vivekananda Yoga Anusandhana Samsthana finished third and Savitribai Phule Pune University clinched fourth place in the first round. (ANI)