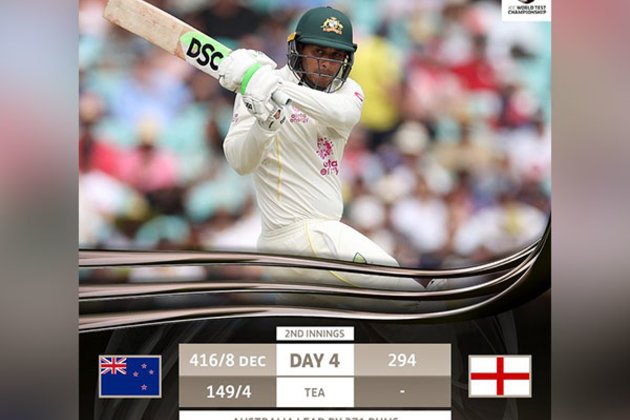 Sydney [Australia], January 8 (ANI): Usman Khawaja and Cameron Green helped Australia extend its lead to 271 in the second session on Day 4 of the ongoing fourth Ashes Test here at the Sydney Cricket Ground on Saturday.

At the tea break, Australia’s score read 149/4. For the hosts, Khawaja (35) and Green (26) are currently unbeaten at the creaseResuming the second session at 66/2, Australia was given a body blow in the very first over as Mark Wood had Marnus Labuschagne (29) caught by Ollie Pope. Usman Khawaja, the centurion from the first innings then joined Steve Smith in the middle.

Khawaja and Smith put on 18 runs for the fourth wicket, but this stand was broken by Jack Leach as he clean bowled Smith (23), reducing Australia to 86/4 in the 29th over with the hosts’ lead being 208.

Khawaja and Green then came together and the duo ensured that Australia did not lose more wickets before the tea interval.