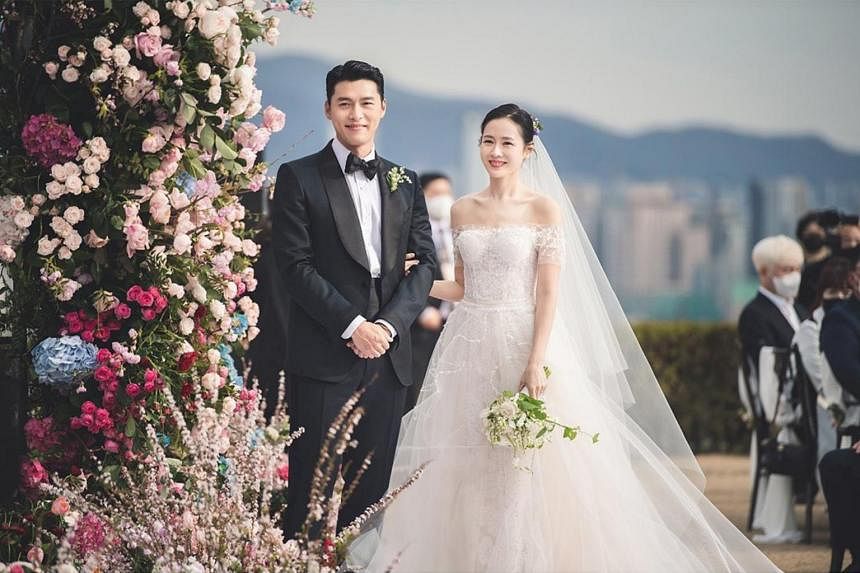 SEOUL – South Korean stars Hyun Bin and Son Ye-jin have travelled to the United States for their honeymoon and their agencies have released more photos from their wedding on March 31.

Hyun, 39, and Son, 40, were spotted by the media arriving separately at Incheon International Airport on Monday (April 11).

According to South Korean newspaper Kyunghyang Shinmun, the couple would first fly to Los Angeles before heading to Hawaii for their honeymoon. They would then travel to New York before returning to South Korea.

Hyun and Son, who played lovers on the romantic drama Crash Landing On You (2019 to 2020), confirmed they were dating in 2021 and announced their engagement in February.

The couple had also acted together in the crime thriller movie The Negotiation (2018).

They were spotted together at a supermarket in Los Angles in January 2019, but their agencies denied they were dating then.

On Monday, their agencies released four more photos of their wedding, with the couple seen walking hand in hand into the flower-filled wedding venue.

The star-studded affair was held at Aston House at the Grand Walkerhill Hotel in Seoul. The guest list included actors Gong Yoo, Song Joong-ki and Jang Dong-gun, as well as actresses Ha Ji-won, Jeon Mi-do and Gong Hyo-jin, who caught the bridal bouquet.

After the wedding, Hyun and Son spent their first weekend as newlyweds at their penthouse in Guri city in Gyeonggi Province. They also met up with their relatives and good friends before their honeymoon.

Hyun is scheduled to star in spy action film Harbin, with filming set to begin sometime in 2022.