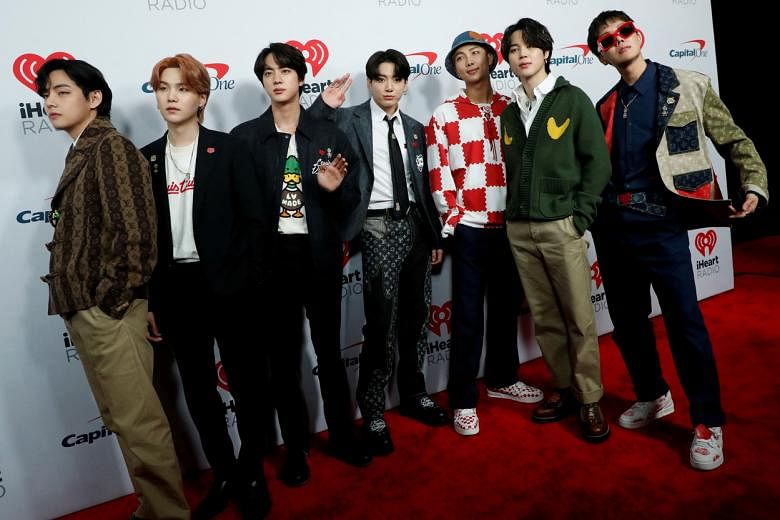 SEOUL (REUTERS) – South Korean boy band BTS will return to the United States for a series of concerts in Las Vegas in April, their agency said on Wednesday (Feb 23).

The concerts, part of their Permission To Dance On Stage tour that has been disrupted by the Covid-19 pandemic, will be held on April 8, April 9, April 15 and April 16.

The last show will be live-streamed, Bit Hit Music said in a statement.

Since debuting in 2013, BTS have spearheaded a global K-pop craze with catchy, upbeat music and dances, as well as lyrics and social campaigns aimed at empowering young people, many of whom have formed massive online fan bases.

The seven-member group played their first in-person concerts since the onset of the pandemic in November, in Los Angeles.

Last week, the band announced they would put on the first shows for their home fans since the pandemic began, with three concerts in South Korea’s capital, Seoul, next month.

On Tuesday, Big Hit said V, the band’s singer and songwriter, had recovered from a coronavirus infection.

The 26-year-old, whose real name is Kim Tae-hyung, was the fifth member of BTS to contract Covid-19.

Suga, RM and Jin tested positive in December shortly after their return from the US shows, followed by Jimin in January. They have since recovered.

As the pandemic spread in 2020, the band postponed and then called off what was meant to be their biggest international tour involving nearly 40 concerts. They held some online shows instead.