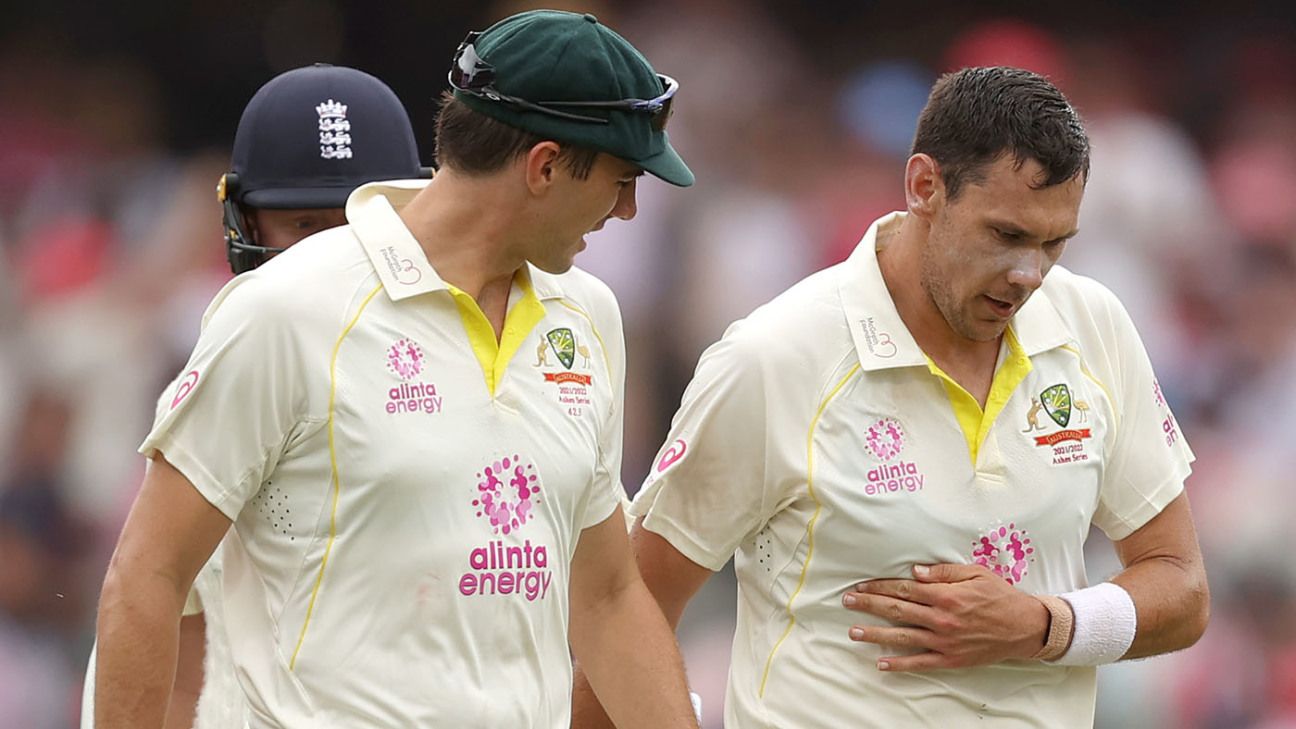 Josh Hazlewood will miss the final Ashes Test in Hobart as Australia continue to take a cautious approach to his recovery from the side strain he picked up in the opening match at the Gabba.

However, Australia are confident that Scott Boland will have no major ill-effects from the tumble he took on the final ball of the second session at the SCG which left him needing a scan on his ribs after his elbow jammed into his side.

Boland did not bowl after tea, having claimed two wickets during the opening session as England fell to 36 for 4, but would have been able to return late in the day if needed. He may not be used again in the first innings if Australia wrap it up quickly but should be available for the final innings of the match.

If Hazlewood had been fit for this Test, Boland would have been left out despite his stunning 6 for 7 at the MCG. Now he will hope to play three matches in a row, although will face pressure from Jhye Richardson and Michael Neser who both featured in the Adelaide day-night Test.

“Unfortunately Josh hasn’t come up, hopefully he’ll be right for the white-ball game,” he said. “It’s been really tough on him, he’s been really hanging out to play this Ashes like everyone.”

“The New Zealand and Sri Lanka series will form part of his preparations for the Test and white-ball tour of Pakistan from early March.”

Langer added that Richardson, who has been nursing a lower leg problem since the second Test where he took a five-wicket haul, would be in contention under lights in Hobart.

“To have guys like Michael Neser and Jhye… they’ll both be in contention. It’s exciting to have these options with a couple of our players going down.”

Mitchell Starc is the only specialist Australia quick to have played every Test of the series with captain Pat Cummins forced to sit out Adelaide after being a close contact of a Covid case.

Having dominated the first session at the SCG – stringing together 11 maidens in a row either side of lunch while taking three wickets – Australia’s attack came under sustained pressure for the first time in the series from Ben Stokes and Jonny Bairstow, although they have remained well ahead in the contest, to pose a few questions to Cummins.

“I thought our first two hours, similar to what we’ve seen this whole Test series, was as relentless bowling as I’ve seen from Australian cricket,” Langer said. “Then as we’ve been waiting for throughout the series, a great fightback. I thought Ben Stokes was courageous with his side [injury], Jonny Bairstow a brilliant Test hundred, he got a rough knock on his thumb.

“England had the better of us in the second two sessions. That will be good for Pat and his captaincy development. It can’t always be rainbows and butterflies as he’s probably found so far. We’ll talk about how we are going to attack England in the morning but so far he hasn’t put a foot wrong and don’t think he has today, either.”