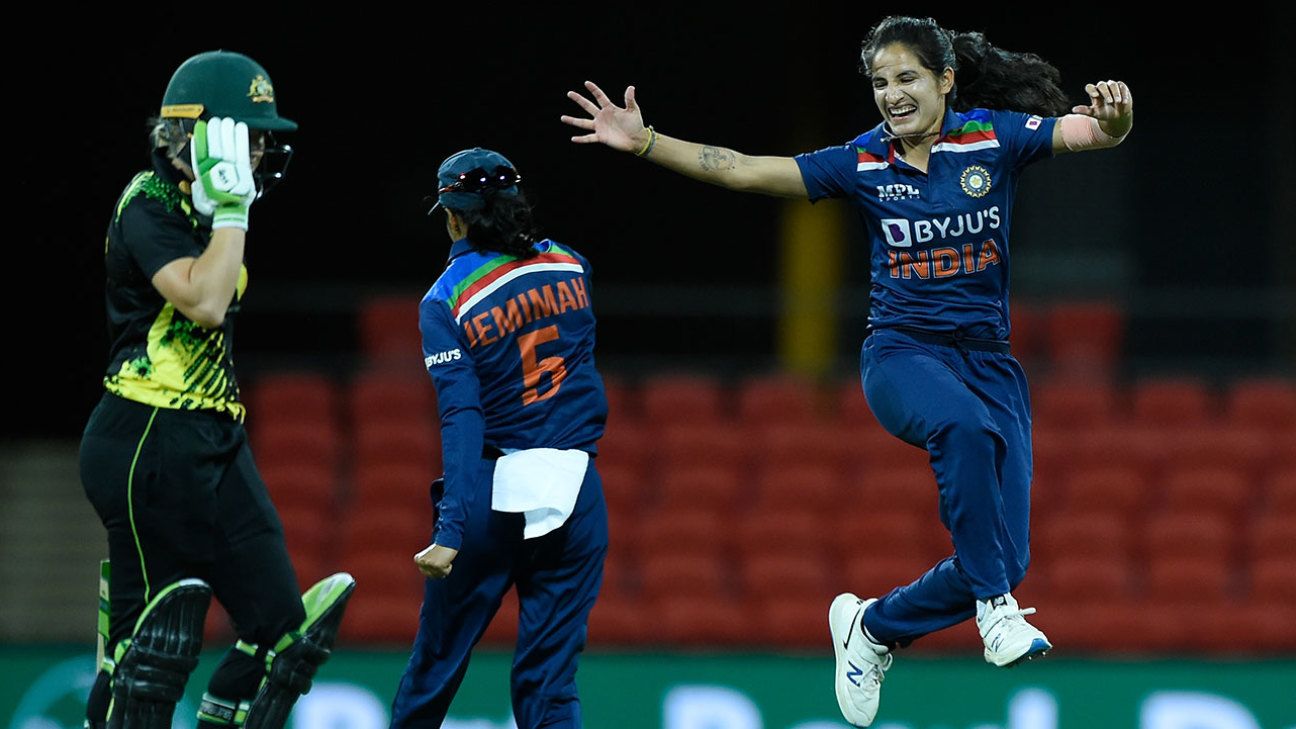 Experienced fast bowler Shikha Pandey and batter Jemimah Rodrigues have been left out of India’s 18-player touring party for the upcoming Women’s ODI World Cup in New Zealand in March-April.

Pandey, 32, last played an ODI in July, during the England tour. She was also part of the Australia tour that followed in September-October but didn’t make the XI in 50-over cricket. The emergence of Meghna Singh and Renuka Singh, who is not capped in ODIs but impressed during the T20Is against Australia, appears to have pushed the senior player out of contention.

Similarly, 21-year-old Yastika Bhatia made such a strong impression Down Under that she has effectively replaced Jemimah Rodrigues in the team.

Though the BCCI release that carried the squad announcement didn’t explain the exclusions of Rodrigues and Pandey, ESPNcricinfo understands that the pair, despite being fit and available, were left out owing to what those in the know have described as “underwhelming performances in the format in the recent past”.

As per the pandemic protocols put in place by the ICC, three standbys have been picked: the highest run-getter at the 2021 Challenger Trophy Sabbhineni Meghana, the fifth-highest wicket-taker in the tournament Simran Bahadur and senior left-arm spinner Ekta Bisht, who was dropped from the annual central contracts roster for the ongoing season and last represented India, in an ODI, during the England tour in 2021.

India’s fast bowling was a massive talking point when they visited Australia in September. They excelled in the only Test of that tour to the point that Alyssa Healy conceded that they “showed us what we couldn’t quite do with the new ball“. Meghna Singh was a key component in that attack. She opened the bowling with Jhulan Goswami – a combination that might be on show again when India begin their World Cup campaign against Pakistan on March 6 – and picked up 2 for 56 from 19 overs. Her ability to swing the ball away from right-handers was particularly eye-catching.

Renuka, who had an impressive domestic season in 2021-22, received strong praise for her work in combination with Goswami, Meghna and Pooja Vastrakar during the T20Is against Australia. “It was amazing to watch our bowlers dominate the Australian batters, so for me that was the biggest positive,” Smriti Mandhana had said.

Yastika was the batting highlight to come out of that tour. The left-hander made a half-century in only her third appearance in ODIs and her strokeplay against some of the best bowlers in the world appears to have convinced the selectors to persist with her. In the Challenger Trophy that followed, she was named Player of the Match in the final against India D, scoring a match-winning 86.

Rodrigues lost her place in the ODI side after a poor run in England in July, and while her stellar performance in the Hundred helped her make comeback in the shortest format, it wasn’t enough to book a place at the World Cup.

Richa Ghosh continues to keep the gloves for India, with Taniya Bhatia backing her up. Ghosh earned her stripes in Australia as well and her ability to score quickly fits in well with a team that is trying to improve in that regard.

Punam Raut, who was part of the ODI squads for the England and Australia tours last year and a member of the team that finished runners-up in the previous edition of the World Cup, has also been left out.

All 15 players picked in the squad, including the standbys, and the likes of Pandey, Rodrigues and Raut, were part of the 20-player group that took part in a boot camp in Dehradun last month.

ESPNcricinfo understands the multi-day camp, proposed by and held under the supervision of head coach Ramesh Powar, was primarily aimed at team-building, rather than skills training. The players, it is learnt, participated in several tasks devised to cultivate better understanding of each other as well as to respond better as individuals, and as a team, under pressure situations.

India will get an up-close-and-personal look at the conditions that they might see at the World Cup when they take on the hosts New Zealand in a five-match ODI series starting February 11. The same 18 players will take part in that series, which also includes a standalone T20I.