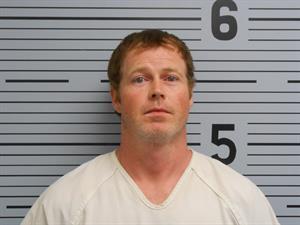 JACKSON COUNTY, Ala. (WHNT) – A man charged with making terrorist threats to law enforcement and other public employees tried to escape from jail after an hours-long standoff, according to the Jackson County Sheriff’s Office.

Leonard Ray Johnson, 44, was arrested on February 10, after an investigation into multiple written threats made over the past few days.

The ALEA helicopter located Johnson in the woods and he was arrested. Authorities say he was armed with two handguns and that he had fired at least one shot as a warning.

Johnson was charged with making terroristic threats and he had another outstanding arrest warrant for harassment.

After Johnson was booked into the Jackson County Jail, Chief Deputy Rocky Harnen said Johnson broke the handicap rail from the wall and used it to break bricks out of the cell.  Corrections Deputies confronted Johnson who then used the rail as a weapon against them.

Johnson was restrained and additionally charged with promoting prison contraband, menacing, escape, and criminal mischief. Johnson was booked in the Jackson County Jail on a $52,300 total bond.