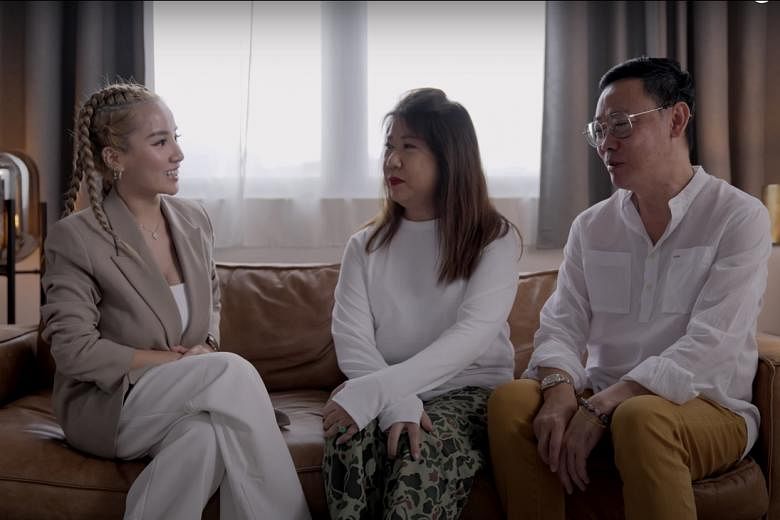 SINGAPORE – Popular influencer Naomi Neo has revealed in a video that her parents had adopted her from China.

The video, which was uploaded on Tuesday (Jan 25) to her YouTube channel, shows the 26-year-old mother of two speaking candidly with her family and friends.

In the 19-minute clip, Ms Neo’s mum said: “I actually wanted to hide this from you forever because, in my mind, I don’t take you as an adopted child.

“I’m so afraid that once I tell you, you will leave the house and not come back any more.”

Ms Neo revealed that she started to have doubts about her parentage when she was in primary school, as her health booklet did not indicate her blood type.

She realised that her birth certificate showed that she was born in China and her parents did not have any baby photos of her. They were also evasive when she raised questions.

However, it was only when she was pregnant with her first child, Kyzo, in 2018 that she became more suspicious as her mother did not seem to have any experience with childbirth.

“Things like a baby’s kicks, she got very fascinated about it,” said Ms Neo, who had a second child, Zyla, in January last year with her husband, who is known only as Han.

“She would say, like, ‘Oh grandma told me that when you’re pregnant, you’re not supposed to do this or eat this.’ It was always someone else’s advice.”

Her parents later revealed to her that they had adopted her after a trip to China. They had been trying to have a baby for eight years prior to that.

A teary Ms Neo said: “All the more because I’m not your biological daughter, I’m very thankful for the way you all took care of me.”

She added that, after becoming a mum herself, she “truly understands the difficulties and struggles of parenthood”.

“Blood-related or not, I believe the love and care from my parents throughout the years have taught me that real family isn’t necessarily defined by our blood, but rather, the people who have been there by our side when no one else is.”

The video is trending on YouTube and drew more than 175,000 views in less than a day after it was uploaded. There has also been an outpouring of support for Ms Neo and her parents in the comments section.