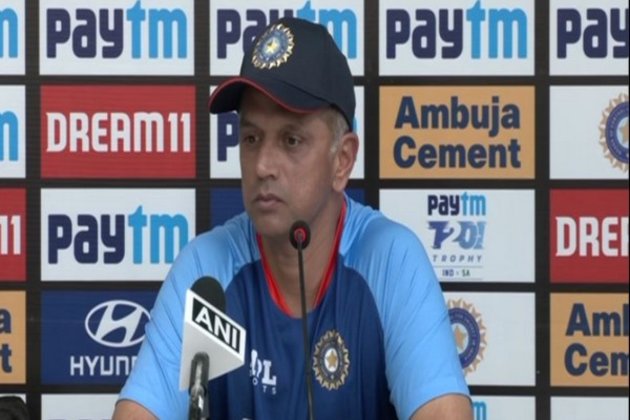 New Delhi [India], June 7 (ANI): Ahead of the first T20I match against South Africa on Thursday, the Indian head coach Rahul Dravid said that the workload of players who have been a part of all the formats of the game for the last six months is being managed and it is a part of the process.

India will take on South Africa on June 9 at Arun Jaitley Stadium in Delhi as a part of the five-match T20I series.

“It is a balance between managing the workload of some of the players, especially those who have been a part of all three formats for the last six months and will continue doing so for the next six months. We have rested a few other players. It is part of the process, we have done so in the past as well,” said the head coach during a press conference.

Dravid went on to add that it is unrealistic to think that senior players will be available every time for every game.

“We want to ensure that they are fit for big tournaments and we have to manage them before that to ensure that they are peaking at big games and tournaments. We understand that there are times when we will have to rest our big players and will be able to probably field our best side all the time. But from my perspective, this is also exciting for other youngsters to get opportunities to play. It helps us improve the depth of our side. There are some positives that come out of such situations,” he added.

Dravid lauded Hardik Pandya, who led Gujarat Titans to the IPL Trophy in its debut season, saying that he is at his best and he is a fantastic cricketer with both bat and ball.

“We have seen this for India in the past and he has been successful for India in the white-ball cricket. He has shown some good form in this IPL as well. Very pleasing to have someone of that quality back. At this point in time, it is good that he has started bowling again, we know what it does for us and what depth it brings to the side. For us, it is about ensuring that we are able to get the best out of him as a cricketer,” he added.

About Pandya’s possible role in the team, Dravid remarked that sometimes roles played in franchise cricket might match with roles played in international cricket, but sometimes players might need to play different roles for different teams as per the team’s requirements.

“Same is applicable here. The roles that players play for their franchises might be different from what we expect them to do here, based on team combinations and the kind of team we have with players established in certain positions,” he added.

The head coach said that the team is in touch with India’s all-format captain Rohit Sharma.

The head coach made it clear that the side is looking forward to getting great starts from their top three batters and they should be able to play all the roles, be it maintaining a good strike rate or controlling the innings when the pitch is challenging or few wickets fall early.

“In T20 cricket, you want guys to play positively and these guys do that. We have that quality, and in our top three, each one of them can play these roles if required. The roles at franchise roles might be different. We will give them a lot of clarity on their roles, and the expectations we have from them. I am confident that anyone we pick in the top three should be able to play all the roles required depending on the situation and pitch,” he said.

The head coach made it clear that it is being ensured that the best side possible is fielded for the fifth Test against England which will be played in July.

Dravid is pretty happy with the fact that Indian captains like Hardik Pandya, KL Rahul, Sanju Samson and Shreyas Iyer have performed well in the IPL.

“It is nice to see a younger batch of captains leading their teams. It is great and helps players develop. Whenever you lead a team, you have to make decisions, it helps you grow as player and person. It is great from our perspective that many leadership positions had many young Indians,” he added.

Ahead of the first T20I of the five-match series against South Africa, Team India started practising, here at the Arun Jaitely Stadium on Monday.

Hardik will be making his comeback to the Team India squad, after his successful stint in IPL 2022, where he guided Gujarat Titans to the title in their maiden season.

As Virat Kohli and Rohit Sharma have been rested from the series, Team India will be led by KL Rahul along with Rishabh Pant as the vice-captain. After delivering great performances in IPL 2022, pacers Arshdeep Singh and Umran Malik got their maiden Team India call-up for the series.