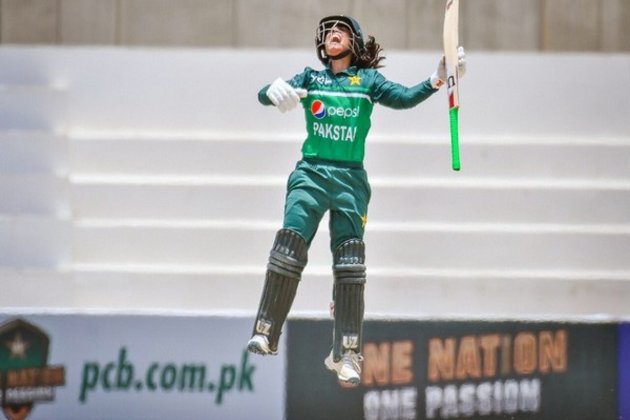 Dubai [UAE], June 7 (ANI): Pakistan opener Sidra Ameen and Sri Lanka captain Chamari Athapaththu have made notable progress in the ICC Women’s ODI Player Rankings after finishing as the top run makers for their teams in the first series of the ICC Women’s Championship.

Sidra, who scored 218 runs including a match-winning 123 in the second ODI to be named Player of the Series after the 2-1 win, has moved up 19 places to a career-best 35th position. Her previous best was 51st attained during this year’s ICC Women’s Cricket World Cup in New Zealand.

Athapaththu, who smashed a match-winning 101 in the second ODI and totalled 142 runs, has re-entered the rankings in 23rd position. Athapaththu’s career-best is eighth position attained during the ICC Women’s Cricket World Cup 2017 in England.

Captain Bismah Maroof remains the top-ranked Pakistan batter, her 98 runs in the series helping her retain 26th position, while Muneeba Ali’s 86 runs see her advance four places to 54th in the list led by Alyssa Healy of Australia.

Meanwhile, several South Africa and Ireland players have been preparing for their upcoming IWC series with some fine performances in an ongoing three-match T20I series in Dublin that is level 1-1.

Ireland all-rounder Gaby Lewis has achieved a career-best 23rd ranking after leading the series run chart with 83 runs in two matches. Mary Waldron (up six places to joint-79th) has also moved up the ranking for batters while Leah Paul (up seven places to 76th) and Celeste Raack (up five places to 87th) are the Ireland bowlers to progress.

For South Africa, Tazmin Brits is up from 39th to 36th while Chloe Tryon (up four places to 49th), Anne Bosch (up 32 places to 60th) and Nadine de Klerk (up five places to joint-79th) have made notable gains among batters.

In the bowling list led by Sophie Ecclestone, South Africa fast bowler Ismail has retained third position after taking two wickets, while Tumi Sekhukhune has advanced 20 places to take 27th position with five wickets in the two matches. Nadine de Klerk is also up in this list to 48th. (ANI)