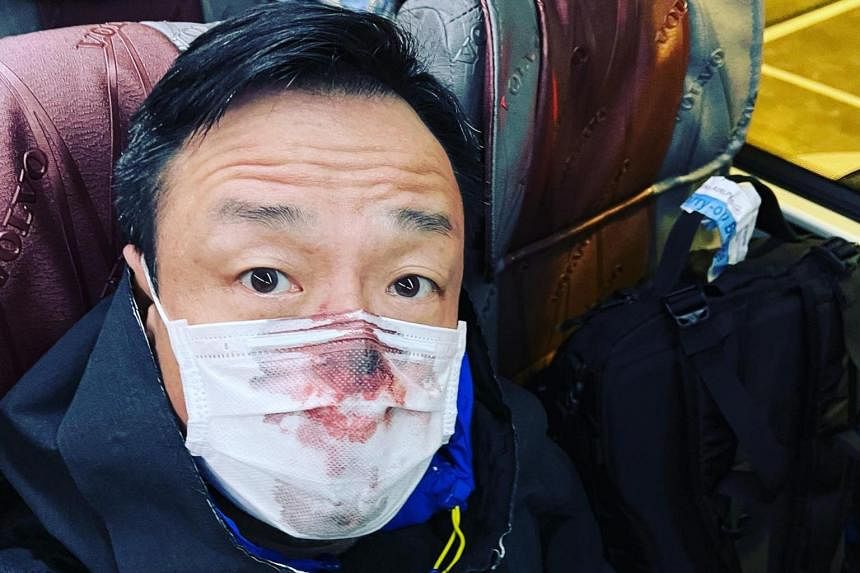 TAIPEI – Hong Kong’s Wong He has shocked some fans with photos of his bloody nose after his arrival in Taiwan.

On Sunday evening (April 3), the actor, who is sometimes credited as Wong Hei, wrote on social media that his nose bled profusely after he took a polymerase chain reaction (PCR) test in Taiwan.

“The murderer has fled the scene, while those who remain do not know the name of the murderer and know only that she was from a hospital,” the 54-year-old wrote dramatically.

He posted photos of his blood-stained face mask and a short video of him in tears at the airport.

The incident was confirmed by Mr Chuang Jen-hsiang, spokesman for Taiwan’s Central Epidemic Command Centre, who told Taiwanese media that the staff member who conducted the test was “not fleeing” but sending the sample to the laboratory for testing.

“There were staff who offered to stop the bleeding and change the face mask, but they were rejected by Wong He,” Mr Chuang said.

Wong reacted swiftly on social media, saying that he rejected the offer as he was given a roll of toilet paper about 3m long to stop the bleeding.

He also disclosed that his PCR test came back positive and he was sent to Nantou to begin his quarantine.

Later in the night, he posted a photo of himself with the blood-stained face mask behind him and the words “Blame the victim” after he was criticised by netizens.

On Monday morning, he posted a video of himself taking an antigen rapid test, with the result being negative this time.

Wong, who is best known for playing a firefighter in TVB’s Burning Flame series (1998 to 2009), has been in the news in recent years for his criticism of how the police have handled the protests in Hong Kong.

According to Taiwan’s Apple Daily, he moved to London in 2021 before moving to Taiwan in October the same year.

He moved back to London in March 2022, where he was reportedly infected with Covid-19. He began coughing on March 22 and tested positive the following day.