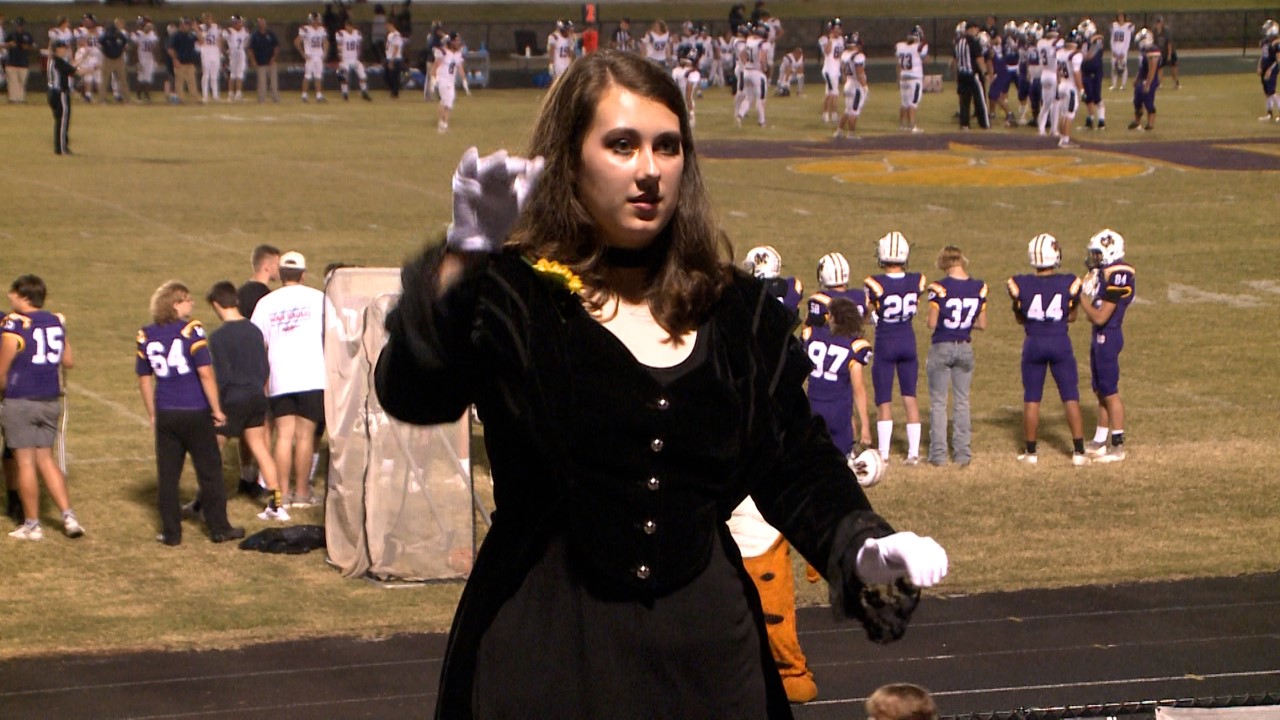 GURLEY, Ala. – High school graduation season is right around the corner. And for one Madison County senior, the year will end as the high note of her musical journey. When the Madison County High School Tigers marched into Friday night’s last fall, they were led by senior Leah St. Clair.

She’s wrapping up a six-year band career. Leah started playing clarinet but switched to another instrument, one that resonated more. “I tried out the bass clarinet and I heard it a hundred times better,” she told me sitting in the band room, “And it’s a gorgeous instrument.”

Here’s why. “I was born deaf,” she said. And it wasn’t going to get better as she grew. “Basically, the hair follicles that are around her cochlea that are stimulated by sound pressure didn’t work for her,” Leah’s dad Eric told me, “Hers didn’t develop.”

At 18 months old, Leah got a cochlear implant. She didn’t give her hearing impairment a second thought, until she started band. “That’s when I kinda noticed, okay maybe I do have like, maybe I’m noticing a hearing problem where I can’t hear certain things,” she said.

Things like high notes. “The low sounds echo into my implant, and I can hear it a hundred times better,” she continued, “That’s why I hear the low brass a lot with their beautiful low sound and with my bass clarinet being so low and I can hear it, it’s music to my years.” She laughed.

Leah fell in love with marching and Friday nights under the lights. “She loved watching the drum major because for her being out on the field, she has to eyeball that drum major,” Leah’s mom Kasi told me, “That’s how she keeps her beat.”

And her parents love watching her perform. “Super, super proud,” her mom said fighting back tears. Eric adding, “I am just awed at the things that she does, her ability to read and comprehend the music.”

Others are equally impressed with her talent. “She’s done a great job,” Madison County band director Bryan Massey told me, “She’s put a lot of pressure on herself, but she has stepped up.” He continued, “she’s told me for years since I got here, her dream was to be drum major. I was like, okay, well work hard and we’ll audition everybody, and I’ll take that into consideration.”

Leah went for it. “Her passion and her drive when she auditioned is what really won me over,” Bryan said before adding, “She’s been a great example of leadership for our program.”

Leah wasn’t going to let her hearing loss halt her dream. “Of course not,” she said, “I never let my disability be an excuse or be something that gets in my way.” She stayed at attention. “Don’t let that define you. Do not let that get in your way. Just push through it,” she said.

She marched forward. “I did not give up. I don’t give up,” she said as she choked up and tears filled her eyes. As she wiped away the tears streaming down her face, she said, “Sometimes you have to go through hard times because sometimes people would let me down and especially there are times where it can be a bit hard not being able to hear things well. But again, I just don’t let that, I just don’t let that stop me. “

Her hard work paid off. “I said I can do this and then when my name was announced to be the drum major, like I did it. I did it,” she said proudly. Yes, she did. She found her forte. Leah and the Tiger band received superior ratings during the Hoover Marching Invitational last fall, and she was named “Best In Class Drum Major.”

Leah plans to go to Calhoun College in the fall and get involved with the theater program and possibly the jazz band. She hopes by sharing her story, she can inspire others with disabilities to reach for the stars and not let anything stand in their way of pursuing their dream.