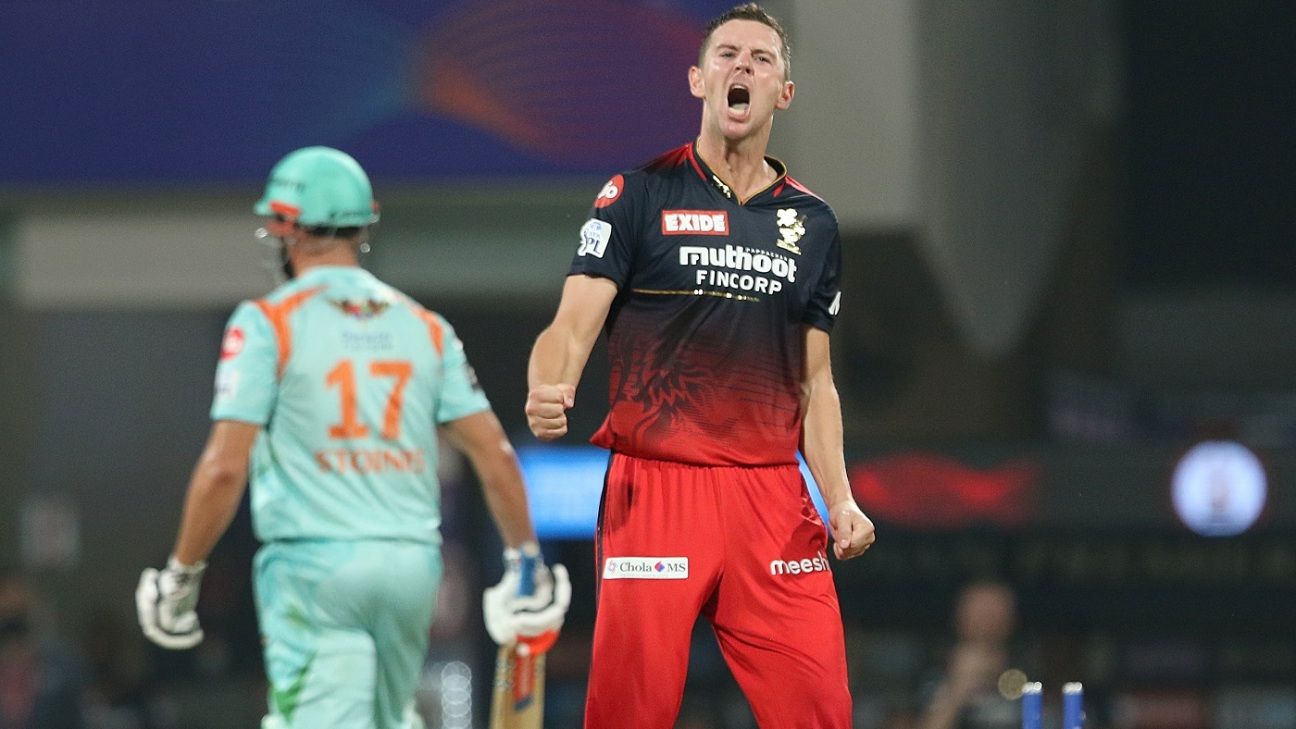 Josh Hazlewood earns his livelihood in Test cricket by banging the red ball on hard lengths. His basic plan is to pitch the ball short of a length, ideally on the seam, with the aim to hit the top of the stumps. Batters find Hazlewood damn irritating – not only does he consistently hit the same spot, but he also consistently hits the top of the bat. And he does that tirelessly across long spells. Ask any top Test batter and he will count Hazlewood among the toughest fast bowlers to face.

In the longer format Hazlewood has the time to plan his kill by steadily inching closer to the exact length that would defeat the batter. In T20 cricket he just has 24 deliveries, which are usually broken across two spells of two overs each. The first one is in the powerplay and the second comes at death. And as anyone who understands T20 cricket will tell, those are the two segments where matches turn significantly. These are also the phases where the majority of the batters play aggressively.

Despite all that, in every match he has played this season, Hazlewood has dominated the batters in those two phases. On Tuesday again he took charge immediately. His job against Lucknow Super Giants – as for all the other fast bowlers – was relatively easier as they had found an ally in a bouncy DY Patil stadium pitch where the ball was flying off length. When that happens even the best batters are anxious.

Like Quinton de Kock, one of the best players against fast bowling, was surprised when he got hit on the left hand after Mohammed Siraj got the ball to kick off the length in the first over of Super Giants’ innings. Hazlewood would deliver the third and fifth overs during the powerplay. The nature of the pitch along with the formidable target raised by Royal Challengers Bangalore allowed him to place aggressive fields including a slip.

And it was there that an alert Glenn Maxwell pouched a brilliant catch after de Kock nicked a delivery from Hazlewood which was banged on length, rose sharply and quick to take the outside edge. To understand the smartness of Hazlewood’s plan, you would need to know that the previous delivery he had bowled to de Kock, the second of the over, he had pitched short of length and angled it away which the batter had pushed for a single. In a matter of two balls, Hazlewood had caught de Kock in his trap by adjusting his length wilfully by a matter of inches.

By the time he started the fifth over, the Lucknow batters were under pressure as only 24 runs had come in the first four. KL Rahul would rap Hazlewood for spraying a short delivery down the leg side which he duly pulled for an easy six. But Hazlewood was not bothered. He tested Manish Pandey’s patience by bowling two deliveries on the fifth while continuing to stick to the hard length. Off the final delivery, Pandey would move back into the crease in his trigger movement attempting to take on the bounce, but the result was a weak push towards into the hands of short midwicket as the ball hit the shoulder of the bat.

Hazlewood would then return to easily negate young Indian uncapped batter Ayush Badon’s plan to hit over the leg side, which he attempted by moving extravagantly outside off stump. Hazlewood followed Badoni and flummoxed him by running his fingers on the side of the ball to slacken the pace of the delivery which resulted in a leading edge being caught easily.

He might be playing his first season for Royal Challengers, but Hazlewood had already become an asset for the franchise. In Harshal Patel and Mohammed Siraj, Royal Challengers already had two bowlers for the death overs. But Hazlewood’s experience and the accuracy have helped him maintain a calm mind and execute the plans well so far in those pressure overs.

With 34 needed from 12 deliveries and the fearsome Marcus Stoinis standing deep in the crease, Faf du Plessis asked Hazlewood to bowl the penultimate over even though he had the option of Harshal, a proven death-overs specialist. First ball, Hazlewood got way with what should have been called a wide by Chirs Gaffaney. Stoinis couldn’t believe it was not called wide and got distracted talking with the umpire who felt the batter had moved towards the off stump. Next delivery Hazlewood followed Stoinis – who had shuffled outside off stump wanting to ramp it – but was instead played-on a fuller delivery.

Speaking to the host broadcaster after the match Hazlewood said he was enjoying bowling at the venues this IPL and in particular DY Patil due to the bounce. “I am really enjoying in particular at the start (powerplay) and probably in particular this ground,” he said. “Wankhede has some bounce but here at DY it is unreal with the new ball. You can obviously go for runs if you get it wrong, but if you get it right you can create wicket opportunities in the first few overs and get the other team on the backfoot.”

Hazlewood had done a similar job at defending champions Chennai Super Kings during IPL 2021, bowling the difficult overs first, and eventually becoming the go-to bowler. The big strength Hazlewood possesses is his ability to control the lengths, which Royal Challengers team director Mike Hesson said is valuable on pitches with springing bounce like DY.

And that control is courtesy his conditioning in Tests. Fast bowlers have dictated play for most parts so far this IPL. Unassuming and simple he might be, but Hazlewood stands out among this select group of matchwinners.