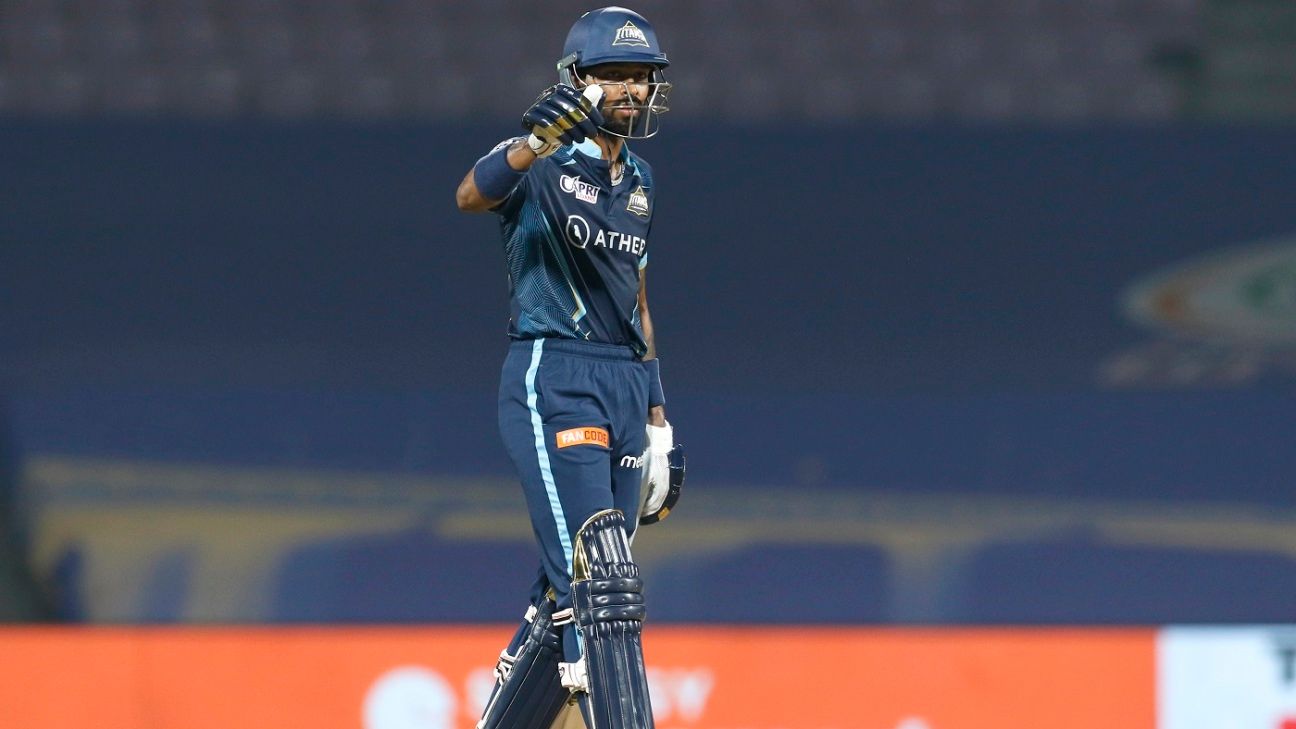 Hardik Pandya scored 50 off 42 in Gujarat Titans’ last match, against Sunrisers Hyderabad. Yash Jha tweeted an insightful stat after the innings. Pandya was the latest in the line of maverick India batters who had started to play “responsibly” the moment he was given captaincy. In their first season as an IPL captain, each of these batters’ strike rates took a big dip from their last two seasons. Pandya’s was the biggest: from 151.67 to 122.6.

Of course, it is not just the captaincy. The structure of the Titans squad is such that Pandya is the main middle-order batter. In just four matches this season, Pandya had faced more balls in the first 10 overs than he has in any of the eight IPL seasons he has taken part in. There was a role to be performed, and Pandya was showing he could play that role. But in the process, were we losing what made Pandya special, especially the power-hitting that struck fear in the hearts of the bowlers?

Three days on, though, Pandya showed batting responsibly doesn’t necessarily mean batting slowly. Walking in at 15 for 2 in the third over, Pandya scored an unbeaten 87 off 52 while others scored 86 off 52 when he was at the wicket. ESPNcricinfo’s Smart Stats valued Pandya’s innings at 100.42 smart runs.

While Pandya’s earlier role in Mumbai Indians of maximising the 10-15 balls he used to get carried its own challenges, these longer innings ask a wider set of questions. Pandya’s responses were deliberate. He went after Kuldeep Sen but played out the first few exchanges against Yuzvendra Chahal – brought on to bowl the fourth over just for Pandya – and R Ashwin.

Pandya came in with a strike rate of 104 and 100 against Chahal and Ashwin, and it didn’t take long to see why. Pandya enjoys a much better strike rate against pace than spin – 160 compared to 129 – but Chahal and Ashwin bowled just the right lines and lengths to Pandya. Neither of them gave him room nor did they pitch it in the slot. Pandya kept respecting them until it came down to the last six overs.

“I am not used to batting this long,” Pandya told Star Sports when collecting his Player-of-the-Match award. “It is two games in a row that I have batted 15 and 17 overs. But I like it. It gives me time. I can calculate and take the right risks. I think in the last game it didn’t come off how I wanted but today I made sure that I had a sense of approach where I was ready to take on bowlers.”

The intent, as Pandya said, was much better in this game, which could have to do with realising how difficult it can be for the death-overs specialists if those batting long don’t take the bowling on. Asked of the thought process behind taking on the No. 4 role, Pandya said: “It allows other players to play freely and not take too much pressure. I have been in the situation many times where I have taken on the bigger role which is to come in at the death and hit a 12-ball 30. I find it very difficult but because of that experience, batting at No. 4 gives me time to rightly calculate and take down certain bowlers and certain overs.”

Thanks to this innings, Pandya’s numbers are looking much better for the season: an average of 76 at a strike rate of 137. He will still know that the strike rate needs to go further north even if it is at the expense of that lofty average. That balance is not easy to master especially in your first season in this role, but Pandya has made a start to getting back to the shape where he had made a case for himself just as a specialist batter in limited-overs internationals.

In a press conference after a team selection, talking about Pandya’s mysterious fitness status, a journalist asked – rather told – the chairman of selectors Chetan Sharma that Pandya doesn’t play any domestic cricket and if he performs half-decently in the IPL, he will be right back in the World Cup side at the expense of other allrounders who are working hard. Chetan’s response was along these lines: do not speak on our behalf and conclude it is so easy for Pandya to get back in.

However, if Pandya continues to bat the way he is, showing both the ability to hit out and play out certain bowlers in the same innings, forget Chetan, even the lovers of domestic cricket might have to concede. Plus his bowling fitness is a bonus. And, he confirmed the discomfort on the night was just cramps.