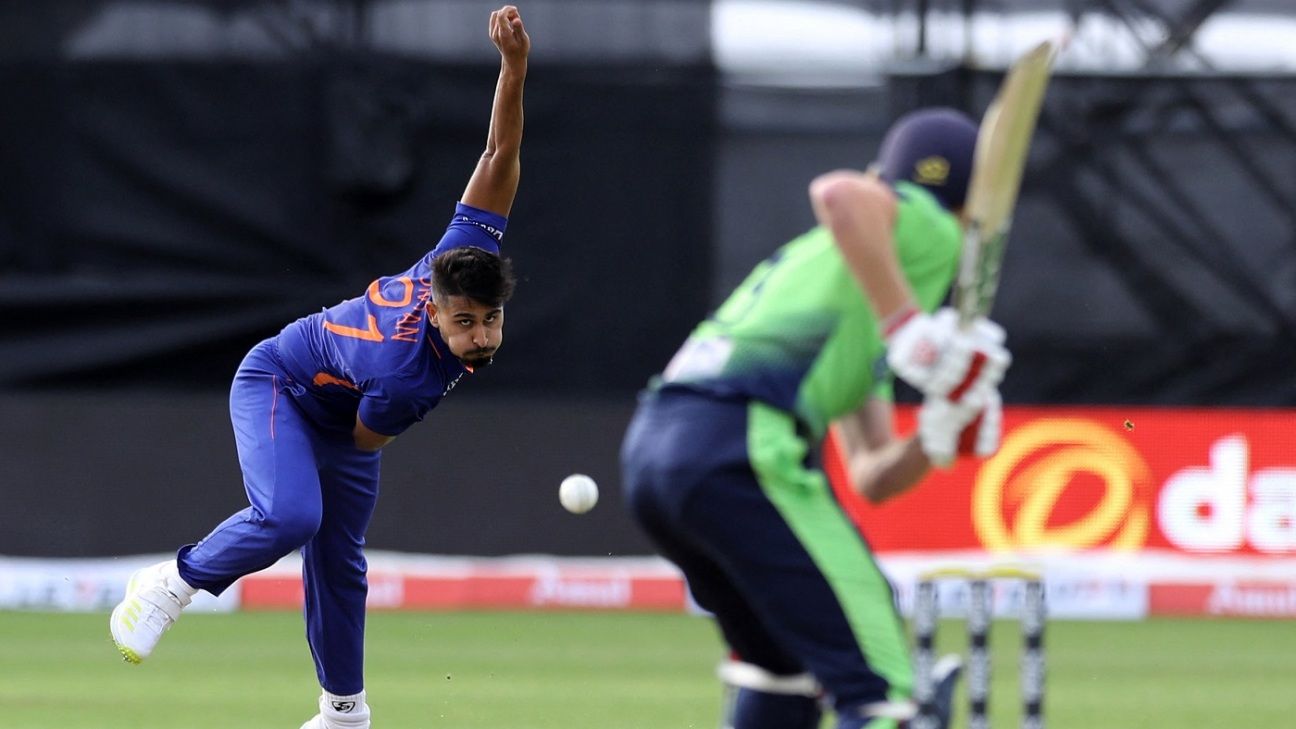 When India began their chase of 109 in the first T20I against Ireland in Malahide, they sent out Deepak Hooda, rather than the regular opener Ruturaj Gaikwad, to start their innings alongside Ishan Kishan. It seemed at the time to be a tactical decision, with the freer-scoring Hooda preferred in a game shortened by rain to 12 overs a side. It emerged later, however, that Gaikwad didn’t bat because he had picked up a calf niggle.

“Rutu had a niggle in his calf,” India captain Hardik Pandya said in his post-match press conference. “We had the choice of taking a risk and sending him in [to open], but I was not okay with it. A player’s well-being is more important, and [I thought] we’ll be able to manage what happens in the match.

“It was quite simple after that, there wasn’t much of a decision to make; whatever our [batting-order] numbers were, we all went up one spot, and it wasn’t a big headache. We wanted to make sure we weren’t taking any chances with Rutu.”

The chance to open proved a good opportunity for Hooda to showcase his skills, having been on the bench through the entirety of the recently concluded five-match T20I series against South Africa. Hooda top-scored for India with an unbeaten 47 off 29 balls as they romped to a seven-wicket win with 16 balls to spare.

Hooda wasn’t the only unused player from the South Africa series to get a chance here. Umran Malik received his first India cap, an event that generated considerable buzz between the toss and the delayed start of the game. As it turned out, however, he only got to bowl one over in the shortened game, and gave away a four and a six to Ireland’s top-scorer Harry Tector.

It was too brief an appearance to draw any conclusions from, and Hardik had words of encouragement for the fast bowler.

“When you play for India for the first time, and the journey he has taken, it’s important to give such a bowler and such a talent time,” he said. “Whether it was a good day or a bad day is irrelevant. For him, just to play for India is itself a very big thing, and that is something which I’m very happy for, [irrespective] of how the result went, good or bad, it’s okay.

“It’s part and parcel of the game, but at the same point of time, from here he’ll only get better, the more matches he plays, and it’s a big thing for him to play for India, for anyone to play for India. I want to let him enjoy this moment because it doesn’t come every time. A debut happens only once.”

Hardik had a generous word for Tector too, and even revealed that he’d given him one of his bats, when asked if the Ireland No. 4’s unbeaten 64 off 33 balls hinted at a future in the IPL.

“He played some fantastic shots, and obviously, he’s 22, I’ve given him a bat as well, so maybe he can score some more sixes and maybe get an IPL contract, and I wish him luck,” Hardik said. “Just look after him well, give him the right guidance. It’s not always about cricket; it’s about understanding your whole lifestyle and what is at stake. If you can manage that, I’m sure he’s going to be around – not just in IPL, in all the leagues in the world.”