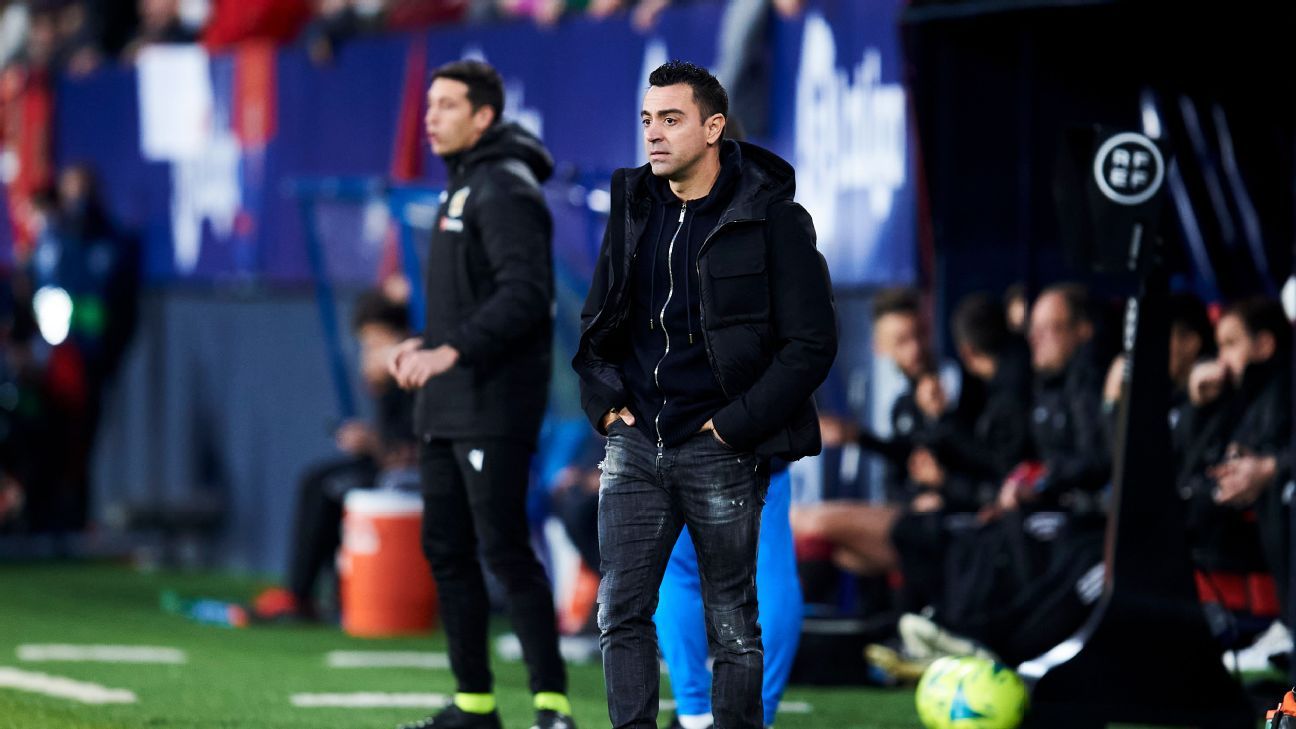 Xavi Hernandez has admitted that turning things around at Barcelona is proving harder than he thought and said some players don’t understand the style of football he wants to play.

Barca won two of their first three games under new coach Xavi, who replaced Ronald Koeman in November, but are now winless in three matches in all competitions.

A 3-0 defeat to Bayern Munich last week saw them drop out of the Champions League and into the Europa League for the first time in 17 years, while they slipped to eighth in LaLiga after a 2-2 draw with Osasuna last Sunday.

– ESPN FC 100: The top male players and managers of 2021
– Notebook: Alexis Sanchez not a priority for Barcelona
– Christmas jumper season: Which club has the best?
– Stream ESPN FC Daily on ESPN+ (U.S. only)

“It’s proving harder than we expected, but this doesn’t stop,” Xavi said in a news conference ahead of Saturday’s league game against Elche at Camp Nou.

“We have to be positive and keep showing that the team’s improving and we’re on the right path. We’ve improved in some respects, but results haven’t accompanied us yet.

“But seeing how hard we’re working and the rhythm of the training sessions, we’re positive. [Saturday] is a huge game and we urgently need to end the year with six points against Elche and Sevilla [on Tuesday].”

However, while Xavi praised the attitude of his players, he said there are some members of the squad that have struggled to take on board some of his instructions.

“There’s still a lack of understanding of the football we want to play,” he added. “There are players that don’t understand positional play and, being Barca [players], that’s surprising.

“We have to be positive and brave. We must press high, press when we lose the ball, attack the spaces… this is what we want.”

Despite being 18 points behind leaders Real Madrid, albeit with a game in hand, Xavi refused to rule out winning LaLiga, although he once again reaffirmed his desire to reinforce the team in January.

“I have been very clear with [president] Joan Laporta about what I think we need to strengthen in the short-term and medium-term,” he said.

“I’ve only been here for a month and, as the coach, I have to improve the players I have, but there are some things we have to change. It’s clear we need to improve the squad, above all in attack.”

One player Barca have been strongly linked with is Borussia Dortmund‘s Erling Haaland, with Laporta meeting the striker’s agent, Mino Raiola, informally in Turin this week.

Xavi said he is unaware of any negotiations for Haaland at this stage, but hit back at comments from the La Liga president Javier Tebas, who said Barca will not be able to afford the Norway international.

“At the moment, the financial situation is difficult,” Xavi said. “We have to be realistic. It’s not going to be easy to strengthen the team. We have the spending limit problem [with LaLiga], but let’s see what happens.

“In terms of Haaland, I don’t know anything, so I can’t say anything. As for Tebas, it’s in everyone’s interest [in the Spanish league] that players like Haaland are in LaLiga, whether that’s for Barça or for another team.”

Barca are still missing Ansu Fati and Pedri for Saturday’s game against Elche, among others, but Xavi confirmed both Jordi Alba and Ousmane Dembele will be available after shaking off knocks.

Dembele is out of contract at the end of the season, but Xavi said he remains “positive” the France international will renew after talking with him this week.